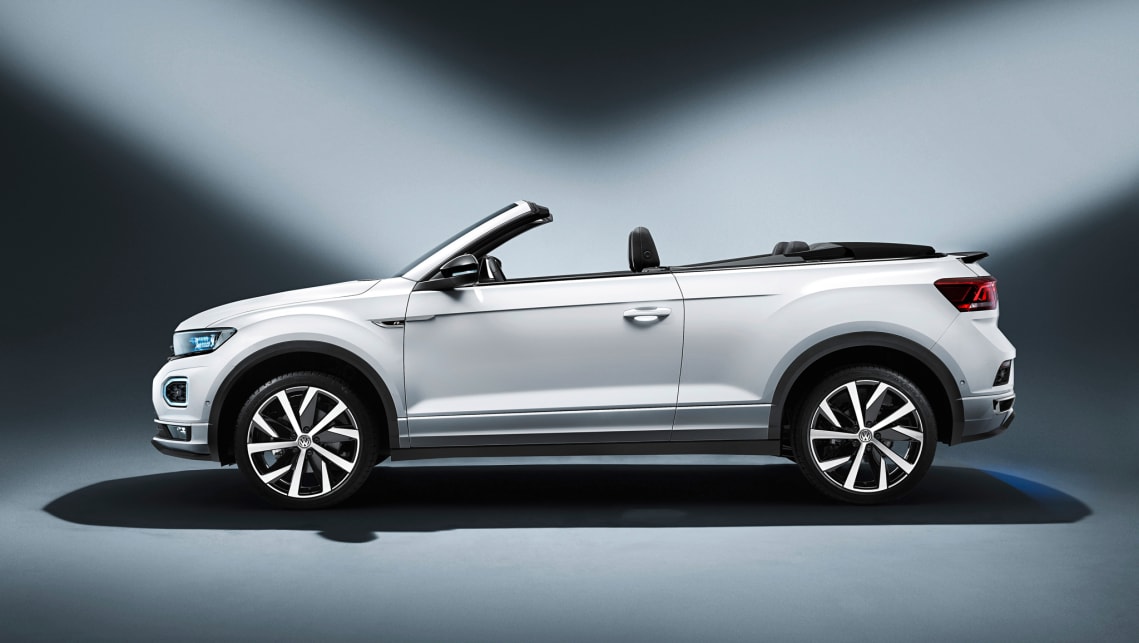 Volkswagen has torn the covers off its “production-ready” T-Roc Cabriolet concept, saying it will join the small SUV’s official lineup in 2020 for Europe, but is as-yet unconfirmed for Australia.

The latest addition to the T-Roc range forgoes its normal four doors and a roof in favour of a coupe layout and a powered soft-top roof. Volkswagen says the new Cabriolet is inspired by the original Beetle and early generation Golf Cabriolet models.

The roof is able to be operated at speeds up to 30km/h and can open or close in nine seconds. Volkswagen says it has designed the soft-top from the base up with new technology in the seals, holding rails and body frame to increase aerodynamic performance, reduce noise, and ensure safety.

Boot space is mildly compromised by the fold-away roof, sporting a 284-litre capacity, down from the regular T-Roc’s 392L.

Internationally, the T-Roc Cabriolet will be available in two trim levels, Style and R-Line.

All T-Roc Cabriolets will have the choice of an 8.0-inch multimedia touchscreen with Apple CarPlay and Android Auto connectivity, as well as the option of VW’s 11.7-inch ‘Digital Cockpit’ instrument cluster. Like the Polo, the T-Roc Cabriolet will also have the option of a 400W Beats-branded audio system.

The drop-top T-Roc won’t miss out on any gear in the cabin.

All T-Roc Cabriolets will carry over their active safety suite from the regular T-Roc range, including auto emergency braking (AEB) with pedestrian detection as well as lane keep assist (LKAS) with lane departure warning (LDW).

Volkswagen’s local arm confirmed to CarsGuide that it would “definitely” want to add the Cabriolet to its T-Roc lineup set to land early next year, but whether it can do so will largely depend on whether it is made available for export from its German head office.