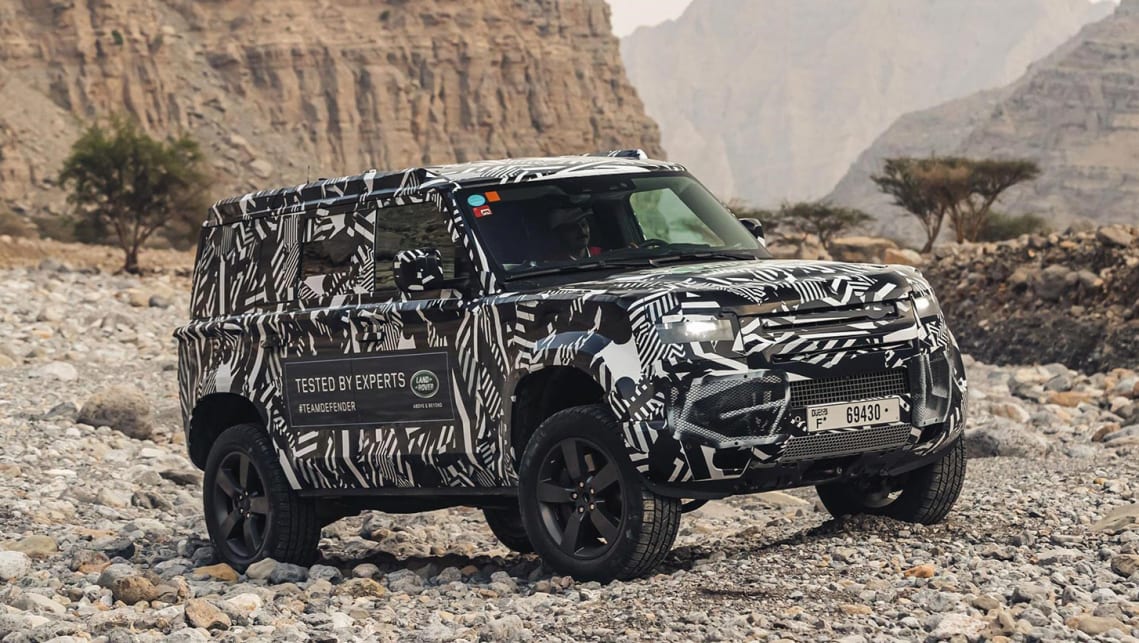 Land Rover Defender 2020: what we know so far

It’s no secret a lot of people were upset when the 68-year long run of the Land Rover Defender (and the Series I, II and III before it) ended in 2016. Here’s what we know so far about its much-anticipated 2020 replacement.

Since we last updated this story, more information has come to light on the much-anticipated 2020 Defender range.

In May of this year, Land Rover Australia’s managing director, Mark Cameron, told CarsGuide that the Defender would be positioned as a “volume seller” for the brand, at odds with its previous status as a niche vehicle for off-road enthusiasts. He expressed hopes that the all-new model would be paticularly suited to Australia’s “adventure oriented” buyer.

Cameron also confirmed that the Defender would come to Australia in not one but two bodystyles, the four door 110 and two-door 90. He said that safety and emissions tech would be front of mind in order for the Defender to succeed in Europe.

Shortly afterwards it was confirmed that a third bodystyle, a longer-wheelbase ‘130’ would also join the line-up, with the leak of the Defender’s specifications from an international presentation document.

The Defender is touted to be available in a total of three body styles within a year of its launch as a four-door.

The document also revealed some of the specifications and suggested trim levels that would be on offer internationally. Read more here.

Most recently, Land Rover confirmed that a ute or pickup-style body is a possibility, citing demand in multiple markets around the world for such a product, although a business case would need to be built. The brand has been clear about its intentions for every model to be global in its appeal.

Another issue with the possibility of a variant with a tray is that the Defender is seemingly no longer a body-on-frame (ladder chassis) design, but rather an aluminium monocoque.

While pick-up trucks around the world have existed before on unibody architectures, it seems to make a pick-up variant (let alone a high-performance variant as is demanded in Australia) not likely for the immediate future.

Land Rover admits that a Defender ute would be great for the Australian market.

The 2020 Land Rover Defender is expected to be unveiled at the Frankfurt motor show in September, so stay tuned for more information soon.

In late 2018, Land Rover issued a series of official camouflage images as part of a press blitz confirming the Defender will re-enter the US market in 2020.

These new press pics of disguised prototypes at long last confirm the silhouette of at least one four door Defender variant, complete with a spare mounted on the rear door.

No such confirmation for the two-door though, although prior to the official images, a similarly-shaped two-door prototype has been spotted in the wild.

The images confirm that the Defender will have a spare on the rear door and the squared-off roof spotted in previous spy pictures.

With this information also came the confirmation that the Defender will be built at Land Rover’s newest facility in Nitra, Slovakia and not in the Austrian Magna Steyr plant as previously speculated.

It also confirms that Defender production will not return to its ancestral home of Solihull, a move likely to reduce costs and avoid potential Brexit woes.

Most recently, a picture of the upcoming Defender’s prototype interior was leaked on Twitter by a jewelry designer. It was more or less confirmed to be genuine when Land Rover’s global PR director, Richard Agnew, replied to the tweet demanding its removal, stating “Legal team are on the way.”

How many cool details can you spot?

The interior points to a more rugged look than the rest of Land Rover’s luxurious Range Rover and Discovery badges. The presence of a ‘Defender’ Badge on the wheel is in-line with previous rumors that ‘Defender’ will be a sub-brand like ‘Range Rover’ and ‘Discovery’.

You’ll also note a multimedia touchscreen and automatic shift-knob, as well as fun ‘Stop’ & ‘Go’ text on the pedals. Much to the chagrin of Defender enthusiasts, a manual gearbox is still yet to be confirmed.

So far, Land Rover’s Australian arm has confirmed that the Defender will also launch here in 2020.

When we asked for confirmation of a production two-door version, local PR boss James Scrimshaw wouldn’t comment further, telling us to stay tuned for more info “in the second half of this year” but for the time being to keep an eye out because there are “definitely more pictures coming.”

Up until recently, not a lot has happened with regards to the beloved Defender badge, other than the release of an extremely limited-edition Defender Works V8 for the 4×4’s 70th anniversary in January of 2018.

The UK brand has been somewhat quiet about the Defender’s replacement since the poor reception to the Defender DC100 concepts of 2011.

The DC100 series of concepts was meant to preview a new low-cost Defender replacement in 2011.

Although, chatter has started up again relatively recently, as some short-wheelbase Land Rover prototypes were spotted testing in cold-weather conditions earlier this year. They wore similar light fittings and bodies to the Range Rover Sport, although they had a much shorter wheelbase.

UK publication Autocar claims the new truck will still be divided into two model grades – the 90 and 110 – and will split the Land Rover family into three distinct sub-brands: Range Rover, Discovery and Defender. (representing refinement, versatility, and durability respectively)

What the Land Rover family tree is touted to look like once the Defender re-enters the market.

The publication also states the next-generation Defender will forgo a ladder-chassis, instead switching to a monocoque to maintain parts commonality with other Jaguar Land Rover vehicles.

While the off-roader may be a monocoque design and has appeared in test form wearing Range Rover bits, small pieces of information slipping out from the tight-lipped brand suggest it will aim for a more rugged look than its Discovery and Range Rover siblings.

A silhouette shown several times by JLR suggests it will have a boxy visage more like the Jeep Wrangler, complete with a spare on the back.

Snow artist Simon Beck created this sketch of the Defender’s silhouette in the French Alps.

This would line up with Jeep Wrangler production continuing in Toledo, Ohio, and Ford’s decision to produce its upcoming Bronco 4×4 in Detroit.

The same article goes on to point out that the Solihull facility specialises in aluminium body construction, perfect for a new Defender.

Autocar however, disagrees, raising the possibility that the Defender could be built in the same Austrian Magna Steyr factory that currently produces the Jaguar E-Pace.

As for launch timing for the new Defender, images published by Autoevolution and India’s carandbike, claimed to be slides from a JLR product pipeline presentation, indicate a 2020-2021 launch window for the 4×4.

This image, touted to be from a JLR product pipeline presentation, suggests a 2020-2021 release window for the upcoming Defender.

Materials from the roadmap also show the brand intends to launch a new flexible architecture across all model ranges, discontinuing the three different platforms or variations that underpin its current range. It also points to the eventual electrification of most JLR models by 2025.

An all-electric concept of the original Defender was shown in 2013.

The all-electric Defender concept was designed to show that ‘rugged’ and ‘EV’ could be used in the same sentence.

JLR Australia was unable to confirm any of the above, stating simply that it is not the company’s policy to talk about future products until they are officially announced.

As to what’s next for the brand’s operation locally, CarsGuide was told this year is mainly about Jaguar and the launch of the I-Pace.

What are your hopes for the next Defender? Tell us what you think in the comments below.