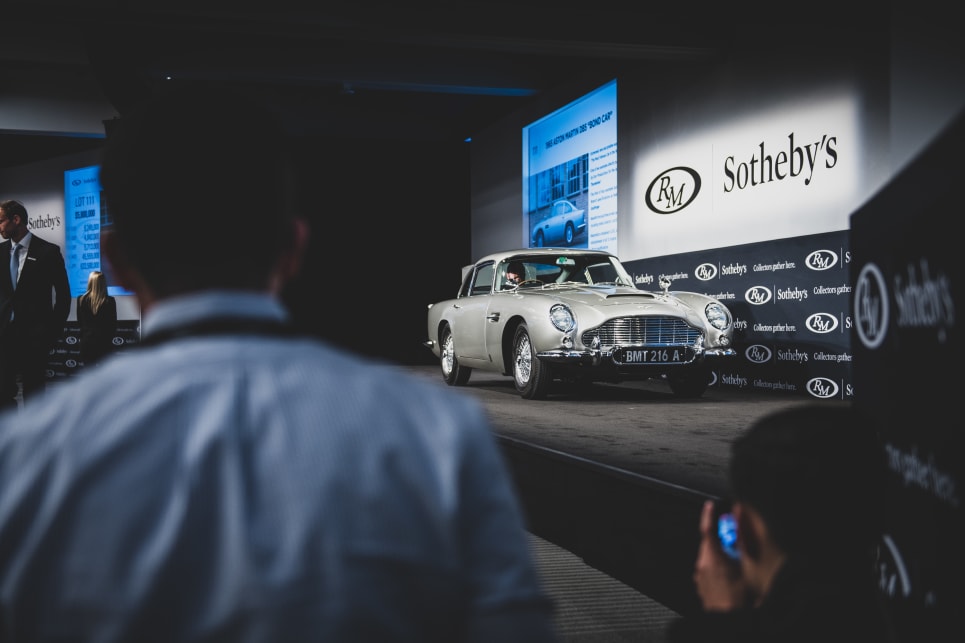 An Aston Martin fit for a secret agent has sold for a staggering $9.4 million (US$6.3m) at auction over the weekend.

James Bond has a reputation for destroying Aston Martins, the British spy has crashed or blown up a DB5, V8 Vantage, DBS and most recently the DB10. So hopefully the new owner of a 1965 Aston Martin DB5 will be more careful, as that price is the most paid for this model at auction.

The car wasn’t used for filming but was built for the promotion of the Sean Connery-era Thunderball in 1965 and features several of the same props used on the movie cars, including fake machine guns.

The 007 DB5 was sold by RM Sotheby’s at its ‘Evening with Aston Martin’ as part of the annual Monterey car week in the US.

Barney Ruprecht, car Specialist at RM Sotheby’s admitted it was an honor to sell the celebrity DB5 and underlines the strength of the collectible car market despite fears of a US recession.

He said: “We are beyond thrilled with tonight’s fantastic result and proud to have set a new record for the most valuable DB5 sold at auction. Beyond this new auction record, the enormous amount of interest in the car and excitement surrounding it ahead of the auction solidifies its status as the ‘most famous car in the world,’ along with the collector car hobby’s great respect for the Aston Martin brand.”

A rare 1965 DB5 Shooting Brake also went under the hammer at the same auction. One of only 12 of its kind, the Shooting Brake went for $2.6m (US$1.7m) which seems like a bargain alongside the Bond-mobile.

The story goes that Aston Martin owner David Brown was frustrated at not being able to carry his hunting dogs in his DB5 so he commissioned his engineers to build a Shooting Brake. It was so handsome that like-minded owners demanded the same bodystyle and a further 11 were built.

The car that sold at auction was owned by only three people since new, and all lived in Switzerland. It is only of only four left-hand drive Shooting Brake.