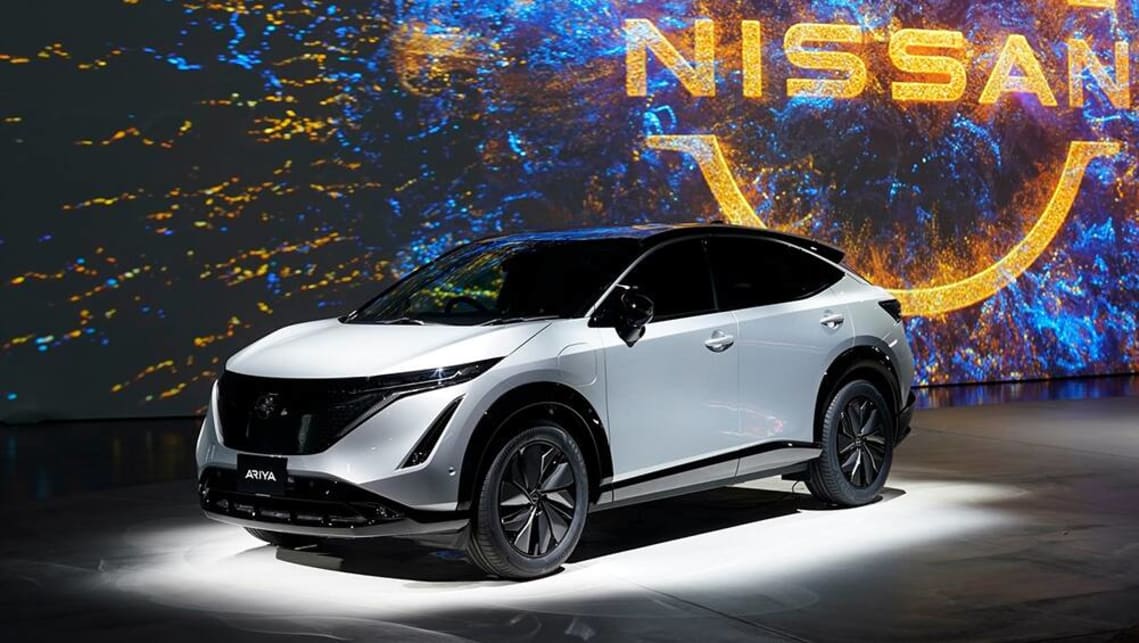 Why new Nissan Ariya 2022 aims to stick it to Tesla Model 3 – and how it might be as important as all-time greats like Datsun 1600, Skyline GT-R and Zed

Nissan’s make-or-break Ariya has a mountain to climb.

Unveiled on July 15 and likely due in Australia sometime in 2022 (or later if sales soar in the key global markets it was designed for – Japan, China, North America and Europe), the medium-sized all-electric SUV is charged (so to speak) with nothing less than resuscitating Nissan’s floundering fortunes.

The Ariya’s timing is critical, with Nissan sales slumping and losses mounting on the back of dated and lacklustre models, compounded by highly-publicised senior management scandals, including former chairman Carlos Ghosn’s arrest for alleged fraud and subsequent dramatic/comedic escape into exile, as well as the continuing COVID-19 global pandemic.

While not a silver bullet, the Ariya brings a number of hopeful signs that Nissan is no longer, at best, treading water or, at worst, running itself into the ground for the second time since the 1990s when Ghosn under Renault management saved it from bankruptcy.

As outlined when the concept version broke cover at the 2019 Tokyo Motor Show, the Ariya is as new from-the-ground-up as a vehicle can get, ushering in the company’s box-fresh CMF-EV architecture that will underpin scores of coming EVs from Nissan (including the next-generation Leaf due around 2024, as well as a rumoured smaller crossover), Infiniti, Renault and Mitsubishi within the company’s Alliance organisation.

A first for a Nissan EV, the production Ariya offers the choice of a single-motor front-wheel-drive or dual-motor all-wheel-drive set-up (dubbed e4ORCE). Its underfloor-sited batteries are water rather than air cooled for improved efficiency and durability, and are offered in either 63kWh or 87kWh sizes, for between 450km and 610km of range depending on configuration. Power outputs vary from 160kW to 290kW, torque tops out between 300Nm and 600Nm, while the quickest grade can hit 100km/h from a standstill in 5.1 seconds.

That such figures are somewhat reminiscent of a Tesla is no coincidence, as the Ariya’s CMF-EV architecture allows Nissan the opportunity to reclaim the ground that the original Leaf forged in the first half of the 2010s, only for its (current) successor to lose when the Tesla Model 3 launched in 2017. Within two years, the latter had supplanted the Leaf as the best-selling EV in history, in no small way by distilling the larger Model S’ substantially greater range, performance, practicality, space and style within a more-affordable package.

In other words, like the Tesla, the Ariya will be flexible and capable enough to serve one-car families, as the existing Leaf’s limitations delegate it as more an urban-only second-car proposition. If the projected circa-$60,000 pricing is realised, it will also undercut the base Model 3 in Australia by at least $15,000 in today’s money – as well as the conceptually-closer Model Y crossover by an even larger margin.

Invariably, the Ariya must also compete head-on with other promising EVs, including the Volkswagen ID.4 and possibly the Peugeot e-2008 and Mazda MX-30, but with the exception of the (significantly smaller) Hyundai Kona Electric and MG ZS EV, these will most likely cost more and/or offer less range, giving the Nissan a handy marketing advantage. Critical for SUV-loving Australians.

Additionally, the production version of the Ariya is refreshingly similar to the pretty Tokyo show concept, revealing the newfound design flair and confidence within Nissan that has been lacking over the past decade. The Japanese EV’s interior is especially striking, and a giant leap forward in aesthetics, functionality and quality compared to today’s offerings.

What all this shows is Nissan being proactive with where consumers are heading, rather than reactive to rivals’ efforts, often years after the moment has passed. In the brand’s 86-year history, some of its biggest successes have come about through similar back-to-the-wall outside-the-box thinking.

The 1967 Datsun 510 (1600 in Australia), for instance, was directly inspired by the BMW 1600-2 in that it eschewed the conservative small-car engineering endemic in competitors like the Toyota RT40 Corona of the time, for an advanced mechanical specification that included an overhead-cam engine, independent rear suspension and disc brakes. The goal was to stand out through innovation while still embracing value and reliability, essentially creating Japan’s first great mainstream family car.

The same mindset resulted in the Jaguar E-Type-like Datsun 240Z of 1969, obliterating the arthritic and outmoded MGs, Triumphs and Austin Healeys that dominated the bottom end of the sports-car market, while there is more than a hint of Audi ur-Quattro and Porsche 959 in the fire-breathing Nissan R32 Skyline GT-R supercar of 20 years later.

Since then, there have been other progressive Nissan notables – namely the K11 Micra/March of 1992, the first Japanese car to win European Car of the Year, as well as the mainstream commercial realisation of the 1980s ‘Pike cars’ like the Be-1, Pao and S-Cargo that predated the post-modern retro revival of the New Millennium with models such as the Volkswagen New Beetle and BMW Mini; the 2007 Nissan J10 Qashqai, kicking off the small-car/crossover craze as a result of Nissan’s inability to breakthrough with European consumers in the Volkswagen Golf class; and of course that first, modern EV, the 2010 Leaf.

However, all turned out to be blips, since all their successors somehow didn’t quite hit the same commercial and critical heights.

If priced and specified right, the Ariya, on the other hand, has every chance of giving the crossover-crazy market a credible and affordable alternative to a Tesla Model 3 or Y.

Could this be the comeback of the decade?