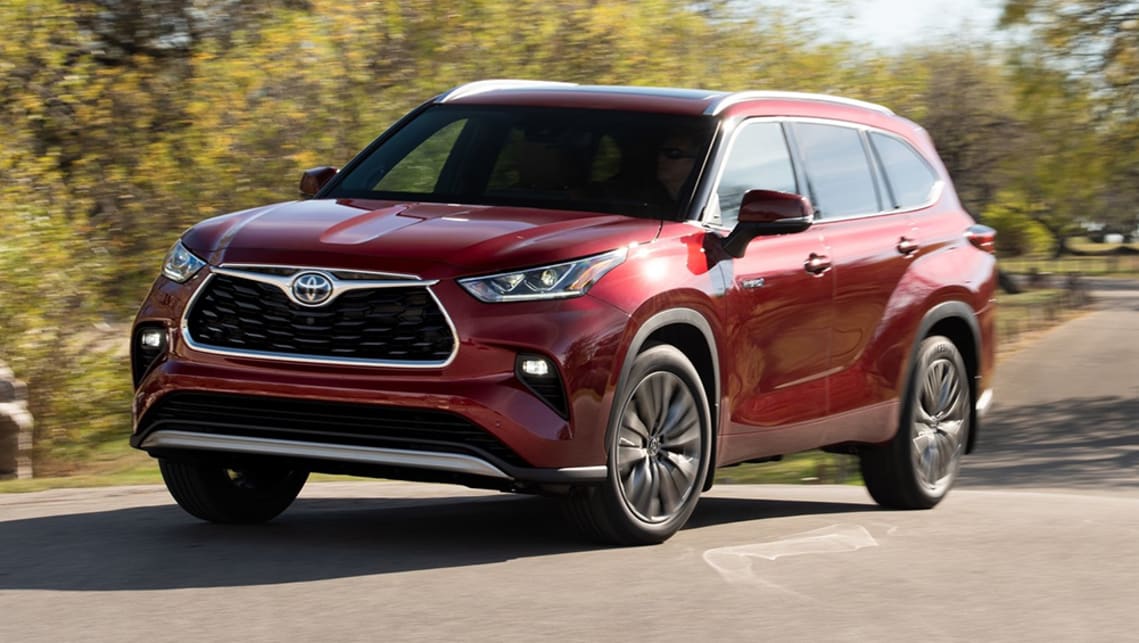 Toyota Kluger, Kia Sorento, Hyundai Santa Fe and Nissan Pathfinder: Why you should wait to buy your next large SUV

Cars keep getting bigger and bigger, but if you have a family of five, the chances are something like a Toyota RAV4 or Mazda CX-5 just doesn’t have enough space for your needs.

Enter the large SUV, which can blend practicality, space and design into one neat not-so-little package.

And there’s plenty to choose from with every major brand, but it’s the Toyota Kluger, Mazda CX-9 and Hyundai Santa Fe that lead the way.

There’s plenty of activity going on behind the scenes though, with several key new models headed our way in the near future.

Here’s what you need to know about what’s on the way so you can make the right choice for you and your family.

The Sorento will go on sale in late August, replacing the model that first launched in 2015.

Kia may be the junior partner to Hyundai, but it will be the first to market with its all-new family-sized SUV. The Sorento – which shares its underpinnings with the new Santa Fe – will go on sale in late August, replacing the model that first launched in 2015.

While the platform is new, the engines will be largely carried over from the old model, with a 148kW/440Nm 2.2-litre turbo-diesel and 200kW/332Nm 3.5-litre V6 both paired to a new eight-speed automatic transmission.

However, the new model will cost more than the outgoing version. The new range retains the same trim line-up as before – Si, Sport, SLi and GT-Line – with prices starting at $43,690 before on-road costs for the Si petrol FWD and stretching to $59,690 for the GT-Line diesel AWD.

It’s only been two years since the South Korean brand launched the well-received new Santa Fe, but already a significantly facelifted model is on the way. Due to arrive in the fourth quarter on the year, the updated Santa Fe features a revised look and some major changes underneath to help it stay appealing into the next decade.

Specifically, it’s believed the new Santa Fe features an updated platform that allows for electrification, which is important given the sales success of the likes of the Toyota RAV4 Hybrid and Subaru Forester e-Boxer.

There’s been no official confirmation of what will power the new range down under, but it’s already on sale in the European market and that may provide a clue. The current 2.2-litre turbo-diesel and 3.5-litre V6 petrol are expected to continue but at least one of the hybrid options from overseas could be available in Australia.

The new Santa Fe isn’t the only big SUV coming to a Hyundai dealer in the final months of 2020. After initially only being available in left-hand drive for America, Hyundai Australia has convinced the global bosses to send the upper-large Palisade our way.

Sitting above the Santa Fe, it will give Hyundai a rival to the likes of the Toyota LandCruiser Prado (in size but not off-road ability) with space for eight occupants as standard; with the option of a seven-seat layout.

The Palisade will be available with two engine options; a 217kW/355Nm 3.8-litre V6 petrol or the 2.2-litre turbo-diesel making 147kW/440Nm. Both are paired with an automatic transmission, with the V6 available front-wheel drive only and the diesel mated to the brand’s all-wheel-drive system.

The new Kluger will be the latest model to switch to the Toyota New Global Architecture.

But before you rush out and buy one of the new South Korean SUVs, you should know that Japan will launch its own new model offensive starting in the first half of 2021. And it will be the biggest name of all in the large SUV market, the Toyota Kluger.

A new generation of the Japanese giant’s very popular SUV will hit local dealerships next year with petrol and hybrid power to try and stay ahead of the chasing pack. Adding a hybrid is logical given the way the smaller RAV4 Hybrid has been received, and the likelihood Hyundai and others will have large SUV hybrids soon too.

The powertrain in question is a 2.5-litre petrol engine paired with two electric motors (one on each axle) for a total output of 179kW/237Nm. There’ll also be a conventional petrol V6 engine making 218kW/356Nm mated to an eight-speed auto and with the choice of front- or all-wheel drive.

The new Kluger will be the latest model to switch to the Toyota New Global Architecture (joining the likes of the Corolla, RAV4 and Prius) which has been designed specifically to improve ride and handling to make the brand have more dynamic appeal.

Pricing and more details won’t be revealed until closer to its Australian launch.

Nissan has committed to overhauling and updating its aging line-up of vehicles so expect the new Pathfinder to be unveiled sometime in 2021.

The perennial underperformer for Nissan is set for a major change in 2021. While the smaller Juke, Qashqai and X-Trail are all among the most popular choices in their respective segments, the bigger Pathfinder has always struggled against the Kluger, Santa Fe, Sorento and CX-9.

Which may explain reports the new-gen Pathfinder will be a radical overhaul with an all-new, bolder and more aggressive look and more premium interior.

Nissan has committed to overhauling and updating its aging line-up of vehicles so expect the new Pathfinder to be unveiled sometime in 2021 and hopefully hit Australia by the end of 2022.

In terms of the new look, you can probably take hints from the recently revealed new X-Trail that’s due in Australia early in 2022. Reports from the US (where the Pathfinder development is being led) indicate the new model will feature a boxier, more rugged look; ironically like the previous body-on-frame Pathfinder the brand ditched for the current unloved design.

Inside it will likely follow the same template as the X-Trail too, with more technology and better materials, while still having space for seven.

Under the bonnet it’s likely to carry over the 3.5-litre V6 petrol engine but now paired with a new nine-speed automatic. There’s also reports from the US that a new hybrid powertrain will be available but it’s unclear what form that will take. It could be either an update of the current option or the introduction of the brand’s unique e-Power technology.