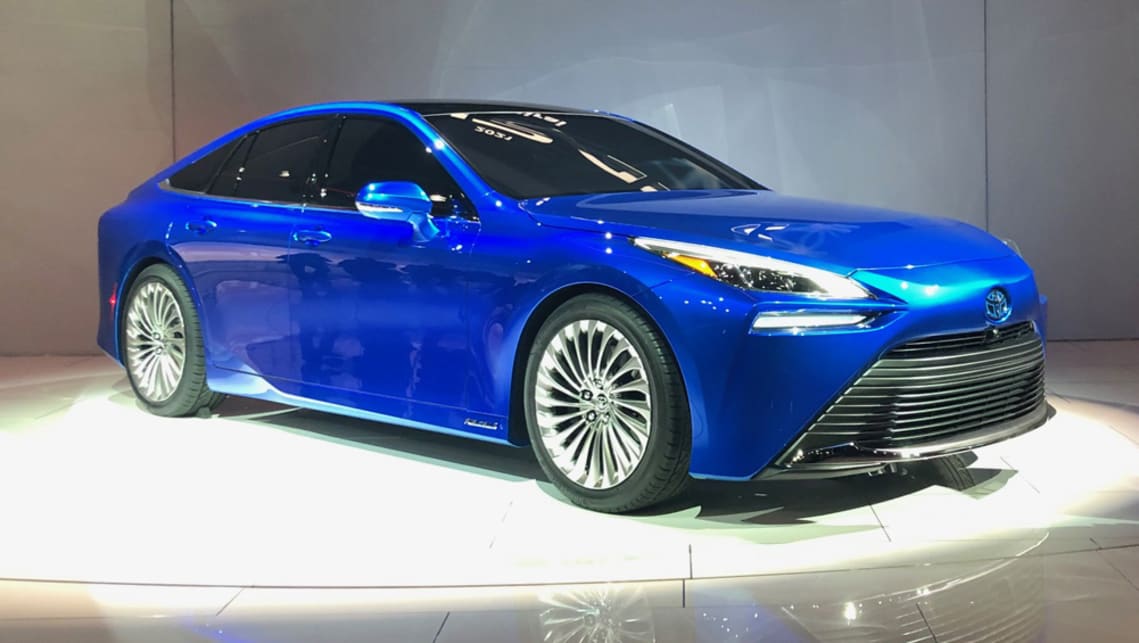 Toyota determined to make hydrogen cars as popular as the Prius

Toyota is ready and willing to take the same ground-breaking role it played in educating the world about the benefits of hybrid cars as it tries, once again, to raise the profile of hydrogen fuel-cell electric vehicles (FCEV) with its all-new Mirai.

Toyota senior engineer for fuel-cell development Jackie Birdsall told CarsGuide at the Los Angeles motor show that she believes hydrogen vehicles will one day be as common as the Prius is now.

“We are committed to fuel-cell technology because it’s a clean, scalable platform that can meet a broad range of needs, and Toyota actually started developing this technology at the same time as it was working on hybrids, so we’ve been at it a long time,” Ms Birdsall added.

“Much as we had to educate people about hybrids, we have to take that same road with fuel cells.

“The good news is fuel cell technology is gaining momentum around the world.”

Toyota alone has sold 3.8 million hybrid cars since 2008, which it claims has prevented the emission of 88 million tonnes of carbon dioxide (CO2) into the environment.

For comparison, the car-making giant managed to sell or lease just 6000 of the original Mirai, but the new version – built in a factory that even uses hydrogen-powered forklifts – is a far more attractive and practical proposition.

Revealed at last month’s Tokyo motor show, the 2021 Toyota Mirai looks sporty rather than dowdy and, from side on, could easily be mistaken for a Lexus with its classy, coupe-like lines and special, multi-layered Hydro Blue paint.

As Ms Birdsall likes to say, “it’s as easy on the eyes as it is on the environment”.

She points out the focus on this car was giving it more mass appeal, so it’s now longer, lower and wider, rides on 20-inch wheels, and is built on a rear-wheel-drive platform for better driving involvement.

It is also now a five-seater thanks to its larger size, and gets a modern interior with a 12.3-inch multimedia touchscreen system.

Vitally, it will now go 30 per cent further between those all-too-rare hydrogen filling stations (even California, one of the world’s most switched on hydrogen markets has just 38 stations), with a range of 650km.

“You’ve probably heard our boss, Akio Toyoda, talking about how Toyota won’t be building any more boring cars, and that was our goal with the new Mirai, which is just as exciting around corners as the technology driving it,” Ms Birdsall said.

Toyota Australia vice-president of sales and marketing Sean Hanley is already on the record as saying he is keen to look at the second-generation Mirai for our local market.

“I think it’s a wonderful opportunity for Australia, and Australian industry, and I think we will continue to work with government and energy companies and other car manufacturers to make a hydrogen society real, because we truly believe hydrogen FCEVs have a great future in this country,” he said.

Globally, Toyota will need hydrogen cars to take off to help it reach its stated goal – known as the Toyota Environmental Challenge 2050 – of reducing the amount of CO2 produced by its cars by 90 per cent in that year, compared to 2010 levels.