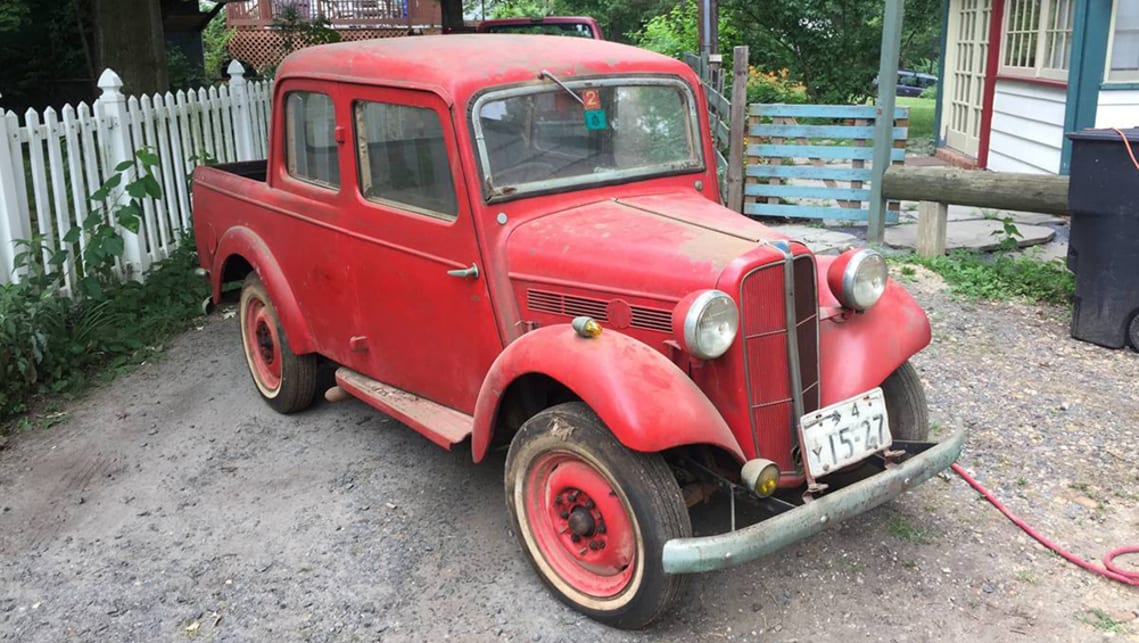 The origins of the dual-cab ute

It’s fair to say the dual-cab ute has changed the local motoring landscape in a big way.

When the two best-selling vehicles in the nation (and when, in some months, up to five of the top 10 sellers) are dual-cab utes, you can see the extent of that effect.

But where did the dual-cab ute concept come from?

Is it a relatively new thing, or are there vehicles out there from the dim, distant past that are now forgotten purely because they were ahead of their time?

For our money, four vehicles from around the same pin-point in history defined the dual-cab ute layout and deserve the title of the originators of the concept.

The Volkswagen Type 2 dual-cab ute came to market a few years after the original VW Kombi and single-cab utility, landing in 1958.

Interestingly, though, it was not VW that made the first Type 2 dual-cab.

Instead, aftermarket coachbuilder Binz was responsible for the first dual-cab Kombi utes, but once VW management saw the genius of the concept – not to mention the profits to be made – they hit the green button and began producing the factory version by the end of 1958.

The design itself was fabulous but flawed, including the drop-side gates (brilliant) and the high bed-height (flawed) forced upon the design by the height of the upright engine in the ute’s tail.

But the high bed did make for a flat cargo floor with no wheel-arch intrusion, and the rest of the driving experience was typical split-window Kombi, which is to say slow, noisy and potentially fatal if you hit anything bigger than a butterfly head on.

But, believe it or not, 1958 was not the year of the first dual-cab, meaning that we have two more brands and three vehicles fighting it out for the title.

Let’s start with the International Harvester A120 Travelette.

Based on the A-Series IH pick-up range, the Travelette featured a three-door layout (one rear door, on the kerb-side) but could seat six passengers and still carry a decent load.

And in a move that is eerily close to our modern utes, the Travelette was available with either two or four-wheel drive.

The ute was six-cylinder powered, had a 3.3m wheelbase and was considered advanced for its use of a 12-volt electrical system.

IH upped the game to make the Travelette a four-door dual-cab for the 1961 model year.

But another vehicle that can lay claim to the invention of the dual-cab was born in 1955 and was the product of none other than Datsun.

Based on the 120 series commercial vehicles, the 120 (also known as the 122) Coupe Utility was an odd looking customer with a stretched cabin (and shortened tray) with just two doors.

But two doors or not, there was definitely two rows of seats in there, and that’s close enough for the mid-50s, we reckon.

Power came from an overhead-valve, one-litre four-cylinder and the vehicle morphed into the U220 for the 1957 model year, complete with 12-volt electricals.

But wait! It seems Datsun really does get the chocolates here; part of our digging around revealed that there was an even earlier Datsun dual-cab.

Dubbed the Datsun 6147, and also known as the Ranch Sedan, the vehicle also used a two-door, dual-cab layout with a short tray tacked on the back.

It would have used Datsun’s 860cc, flathead four-cylinder, good for about 18kW.

The styling features a lot of pre-war cues, and if you find one in a shed somewhere, grab it, because there can only be a handful (if that many) left in the world.

Mind you, finding one outside Japan is a long shot as, like the other pre-1960s Datsun dual-cab pick-ups, the Ranch Sedan was a Japanese domestic market-only car.

Certainly, we’d never heard of the 6147, so there’s every chance that somebody beat even Nissan to the dual-cab concept.

Anybody out there with an advance on 1953?