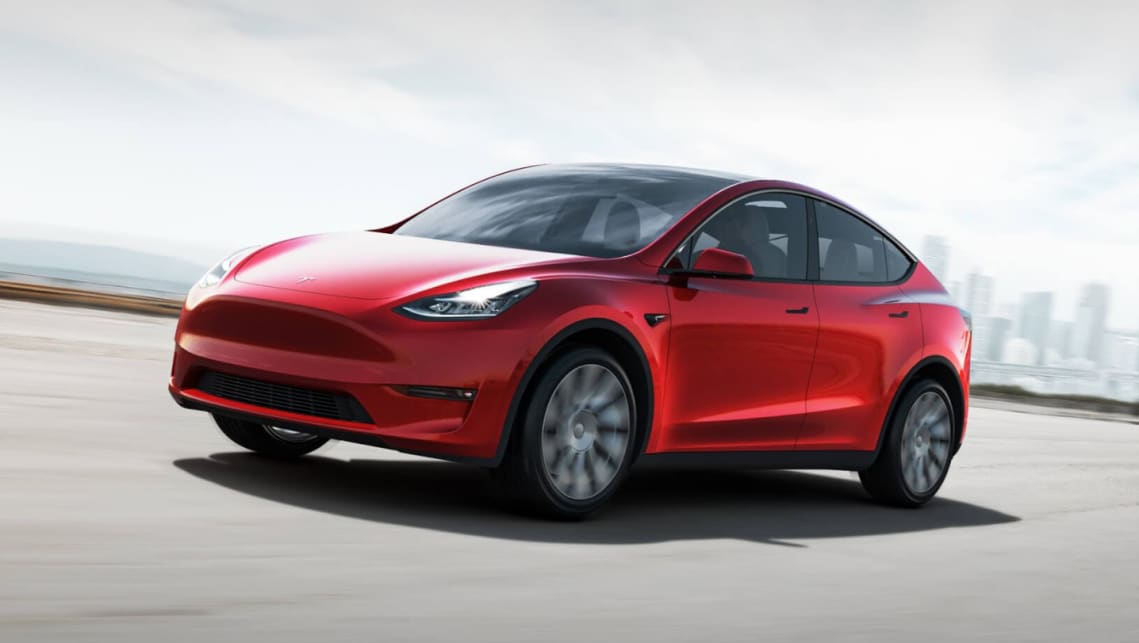 Tesla Model Y 2020: What we know so far about the incoming electric SUV

Revealed in March of 2019, the Model X’s little brother promises to again boost Tesla to new heights, cashing in on the seemingly ever-expanding SUV segment.

With its international launch bearing down, here’s what we know so far about the Model Y.

As of February 2020 – it’s officially the world’s most efficient EV SUV.

The Model Y was rated by America’s Environmental Protection Agency (EPA) as the most efficient electric SUV on the market.

Although the agency uses a rather arcane method for calculating the vehicle’s “mile per gallon equivalency”, the Model Y just managed to outperform the next most efficient SUV, the Hyundai Kona Electric.

It also significantly outperformed an incoming rival, the Audi e-tron, and an early segment arrival, the Jaguar I-Pace. It is also more efficient than the much larger Model X.

Despite these accomplishments, it is still easily outperformed by the lighter and smaller Model 3 sedan. Time will tell if the Model Y will be knocked off of its efficiency throne before its Australian release.

It is genuinely capable of 507 kilometres of driving range

The Model Y is already exceeding the brand’s own bold expectations. It remains to be seen whether its delivery timing will be as smooth…

This driving range was confirmed by the EPA’s testing, and actually outperforms Tesla’s own 505km estimate.

“This is above what we previously stated by a significant margin” Tesla boss Elon Musk reportedly said of the development, putting the gains down to a “great effort of our engineering team”, which has been producing the Model Y in limited numbers for the last few months.

The Model Y is yet to be tested against the WLTP standard used in Europe, and so still has a 505km (WLTP estimated) driving range on the Australian version of Tesla’s site.

It will initially be offered in just two variants in Australia.

The Model Y will come in either Performance form (capable of accelerating from 0-100km/h in a claimed 3.7 seconds with a 241km/h top speed), or Long Range guise,  which will up driving range to the aforementioned 507km – 27km more than the Performance manages.

Other markets will be able to buy a more affordable rear-wheel-drive Standard Range variant, although it is unclear whether it will ever make it to Australia.

The Model Y is expected to be Tesla’s top seller

The seven-seat option for the Model Y will arrive some months after the SUV’s debut.

If you live in a major city, you’ve probably seen a few Teslas around, but when Model Y production gets into full swing, expect that to see more… much more if Tesla’s outspoken boss is to be believed.

“This is just my opinion, but I think it will outsell the S, X, and 3 combined,” Musk said in October of 2019 after driving what he called a “Model Y release candidate” (a software development term for a late-stage beta product).

Model Y delivery dates have moved forward, with “small volumes” moving off production lines now, and deliveries to customers estimated to have moved from October 2020 to the end of March, according to the brand’s 2019 fourth quarter earnings report.

There’s no indication yet what this will mean for the Australian delivery timing of the Model Y. Unlike on the brand’s US site, the Australian site does not offer a delivery estimate yet.

Seven seats are just one of a few options

No matter which variant you chose, Tesla is promising the option for seven seats in the small SUV, courtesy of its low floor and high roof. International outlets have suggested a $3000 (USD) option cost for this.

The Performance variant, on Tesla’s US configurator, seems to offer the ‘Performance Upgrade’ pack as a no-cost option, although we’re not sure what the final cost will be given that it significantly overhauls the car to include 21-inch ‘Uberturbine’ wheels, performance brakes, lowered suspension, aluminium sports pedals and an unlocked top-speed.

What we don’t know: the cost

Some pundits suggest (based on similar pricing to the Model 3) that the base Model Y could cost over $100,000 once delivered in Australia.

Just as with the Model 3’s release, Tesla is expected to be tight-lipped on the exact retail price of a Model Y to Australians right up until it is almost ready to make deliveries.

Over in the US, pricing varies from USD$52,990 for the base Long Range, up to $60,990 for the Performance variant. Again, exchange rates tell only half the story, with delivery and logistics costs needing to be factored in alongside some rather brutal taxes.

One keen pundit has even made a Model Y price calculator plugged into current Australian exchange, tax, and stamp duty rates, based on similar variables to those that affected the Model 3’s pricing.

That calculator suggests a minimum delivered cost of $102,000 for just the base Long Range, provided your state or territory offers no incentives or rebates on the purchase.

So, while the Model Y might be slightly more efficient and offer more range than Hyundai’s Kona, at least the Kona comes in at roughly $30,000 less if this pricing estimate turns out to be even vaguely accurate.