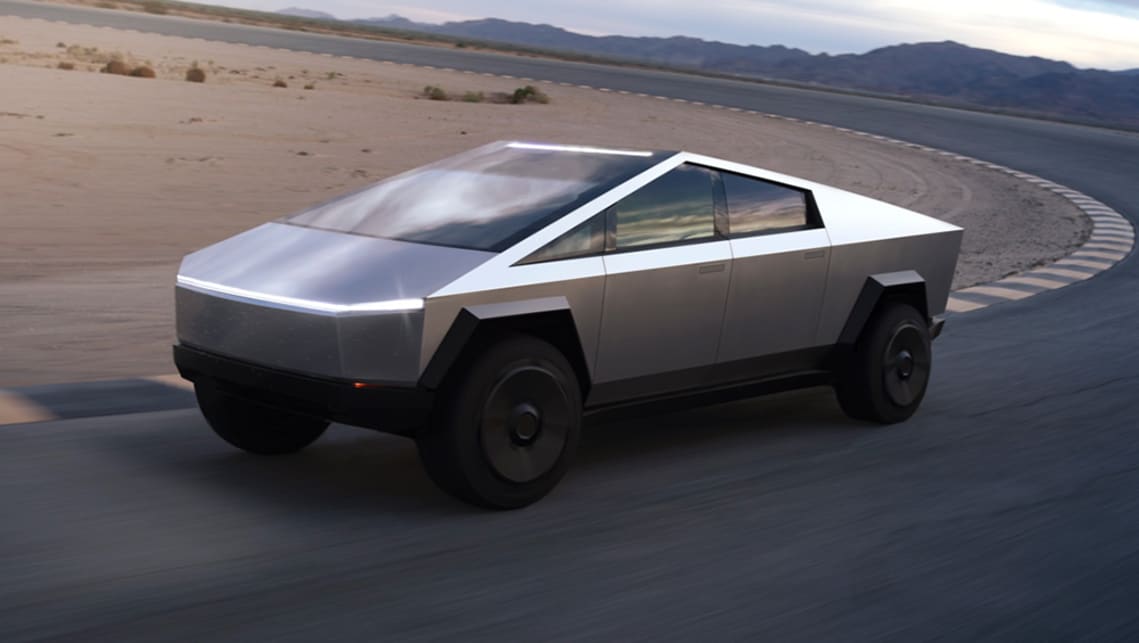 Tesla has sensationally revealed its seventh all-electric model, the long-awaited Cybertruck, which while claimed to be the quickest series-production dual-cab pick-up in the world, won’t actually become available until late 2021.

Australian timing for the full-size, six-seat Cybertruck is yet to be confirmed, although a staggered launch from as early as 2022 can be expected, with all three variants confirmed for local consumption.

Either ways, order books for the Cybertruck that measures 5885mm long, 2027mm wide and 1905mm tall are open right now for keen buyers, with a fully refundable deposit of $150 required.

Single-motor rear-wheel-drive and dual-motor all-wheel-drive variants will enter production first, followed by the tri-motor AWD flagship in late 2022, which the American EV specialist claims can scare supercars by sprinting from a standstill to 97km/h (60mph) in less than 2.9 seconds, while its quarter-mile pass comes up in just 10.8s.

The dual-motor AWD isn’t sluggish, either, completing the 0-97km/h dash in less than 4.5s, while the single-motor RWD is two seconds off its pace.

Tesla isn’t quoting battery sizes yet, but it claims the tri-motor AWD will travel more than 805km on a single charge, while the dual-motor AWD and single-motor RWD have a driving range of more than 483km and 402km respectively. All are measured on the EPA cycle.

The Cybertruck naturally supports the company’s Supercharger network and is capable of receiving power from a 250kW+ DC fast charger.

While the Cybertruck undoubtedly impresses with its straight-line performance and range, it still packs in plenty of utility thanks to its 1981mm-long tub that combines with an obligatory frunk to offer 2832L of lockable exterior cargo capacity.

Braked towing capacity starts at more than 3402kg for the single-motor RWD and rises to more than 4536kg and 6350kg for the dual-motor AWD and tri-motor AWD respectively, easily eclipsing the 3500kg standard in the mid-size segment, while maximum payload is 1588kg.

The Cybertuck is capable off-road, too, with its self-levelling air suspension with adaptive springs and dampers able to increase its ground clearance from a standard 305mm to 406mm, while its approach and departure angles top out at 35 and 28 degrees respectively.

As far as its exterior design is concerned, the Cybertruck appears to have travelled back in time, with its wedge-like shape punctuated by clean bodywork and a unique triangular roofline as well as full-width headlight and tail-light clusters.

At the Cybertruck’s reveal event, Tesla boss Elon Musk said “we need something different” that “doesn’t look like anything else”, and this is certainly that.

While most pick-ups use a body-on-frame chassis, the Cybertruck throws the rulebook out the window with an exoskeleton made out of ultra-hard 30x cold-rolled stainless steel that can withstand sledgehammer shots, as demonstrated live in California today.

Also demonstrated live was the Cybertruck’s transparent metal glass, dubbed Tesla Armour Glass, although it shockingly cracked when a metal ball was thrown at it.

Nonetheless, Mr Musk described the Cybetruck as “really tough, not fake tough”, promising that its bodywork “won’t scratch, won’t dent”, while it “corners like it’s on rails” despite its apparent weight.

Inside, the Cybertruck mimics the Model 3 mid-size sedan with a 17.0-inch central touchscreen multimedia system, although its racecar-style steering wheel and granite-look dashboard are new touches.

Being a Tesla model, the Cybertruck comes Autopilot advanced driver-assist systems as standard, while those keen for ‘full self-driving’ can upgrade their order with the technology for a guaranteed price of $8500 as it is expected to become more expensive in the future.

Tesla also revealed an all-terrain vehicle (ATV) shortly after the Cybertruck’s debut, with it able to be stored and charged in the Cybertruck’s tub when not in use. Its ingress and egress are eased by the tailgate’s retractable tonneau cover and fold-out ramp.