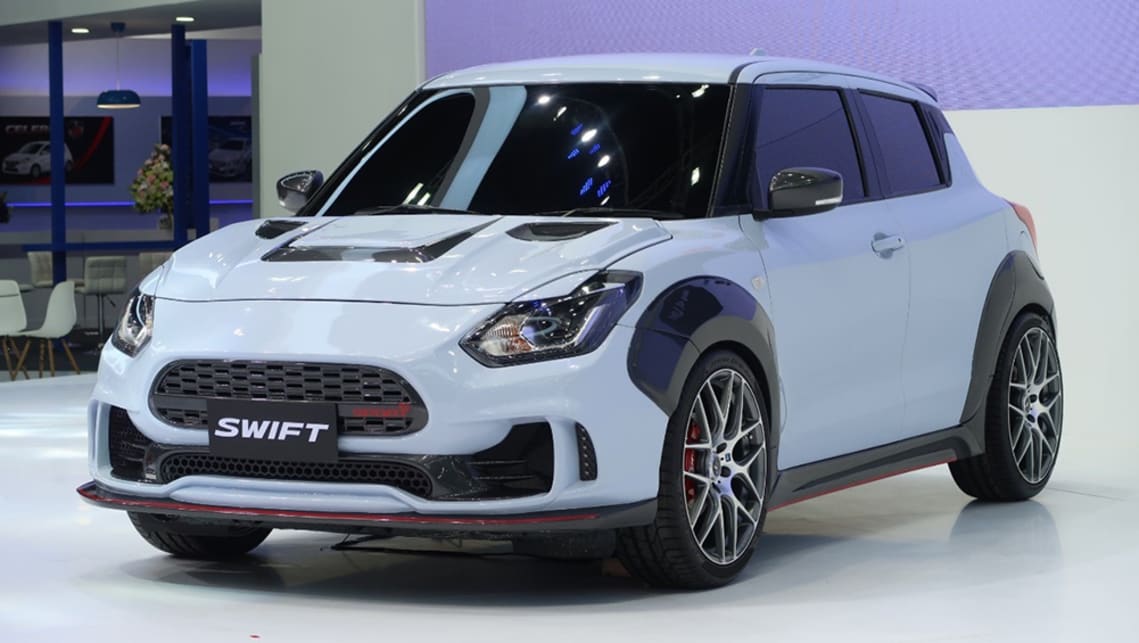 No need to adjust your set, this really is the most visually dramatic version of the popular Suzuki Swift Sport yet, and it could lay the groundwork for a hot hatch to challenge the yet-to-be-revealed Toyota Yaris GR.

Aptly named Swift Sport Extreme, this concept shown at the Thailand motor show takes the ‘regular’ Swift Sport to the next level, but production plans are yet to be announced.

No performance upgrades have been confirmed at this stage, either, so it’s unclear if the Swift Sport Extreme keeps the Swift Sport’s 103kW/230Nm 1.4-litre turbo-petrol four-cylinder engine or gets a more potent unit.

What is apparent, though, is the Swift Sport Extreme’s aggro exterior upgrades, starting with the front end that gets a smaller blacked-out grille, a resculpted front bumper with prominent air intakes, and a sporty splitter.

According to Suzuki, spoilers are so nice, you have to them twice.

But perhaps the Swift Sport Extreme’s most striking design elements are its bulging, vented bonnet and gloss-black fender flares, which feature silver alloy wheels with low-profile tyres below, and are linked front and rear by chunky side skirts with the same gloss-black finish.

Things get a little bizarre at the rear end, as not only does the Swift Sport Extreme have a ducktail spoiler above its window, it also has a secondary spoiler between its tail-lights. A body-colour diffuser with square exhaust tailpipes either side complete the upgrades.

The concept’s windows are heavily tinted, so there’s nothing to share yet regarding its cabin’s upgrades – if any. That said, if it were to translate to a production model, expect sportier treatments.

As reported, a Swift Sport facelift is due in Suzuki Australia showrooms in April. For reference, the current model is priced from $25,490 plus on-road costs.