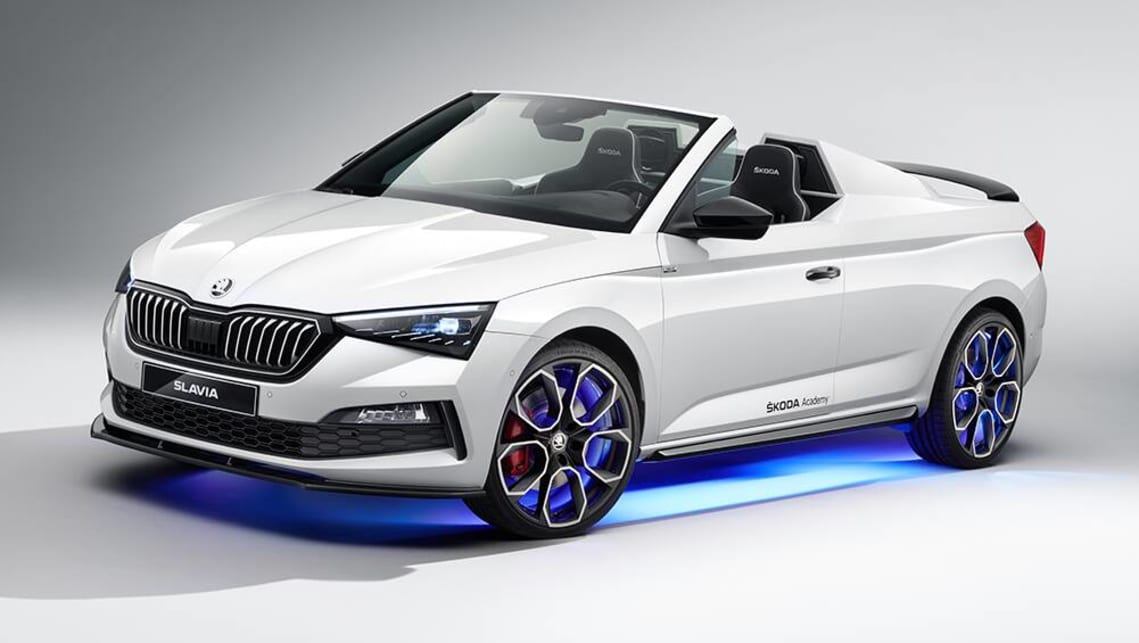 Skoda has surprisingly revealed its very own Mazda MX-5 rival, the Slavia, which is an open-top roadster based on the incoming Scala small hatch.

But before you get too excited, it’s worth noting the Slavia is just a concept. In fact, it’s the latest one from the Skoda vocational school in Mlada Boleslav, Czech Republic, which annually tasks students to produce a one-off vehicle in-house.

Inspired by the 1958 Skoda 1100 OHC racecar, the Slavia naturally started life as a Scala, but soon its roof was removed and rear doors welded in place, while its underbody was reinforced.

Then a rear cover was added behind the Slavia’s remaining front seats, with it highlighted by two flying buttresses that integrate into the redesigned bootlid, which is topped by a prominent spoiler. As a result, it measures 4362mm long, 1793mm wide and 1410mm tall.

Finished in White Crystal Blue paintwork, the Slavia borrows its 20-inch Xtreme alloy wheels (with 235/30 tyres) from the Kodiaq RS large SUV, while its brakes package and wheel hubs are shared with the Octavia RS mid-size car. It also gets an upgraded exhaust system.

That said, the Slavia’s most striking feature is its underbody LED lighting, which can be set to blue, red or white. And to really cap the exterior transformation off, the bootlid’s Skoda lettering doubles as a brake or reversing light.

Inside, the Slavia stands out from the Scala crowd with its Sparco race seats, four-point seatbelts, black perforated leather upholstery with carbon trim and white stitching and piping. The steering wheel and gear selector are also trimmed in white leather up top.

Like the Scala, the Slavia is powered by a 110kW/250Nm turbo-petrol four-cylinder engine, which sends drive exclusively to the front wheels via a seven-speed dual-clutch automatic transmission.

As reported, the Scala is due in Australian showrooms imminently, with its four-variant range priced between $27,690 and $34,690 plus on-road costs.