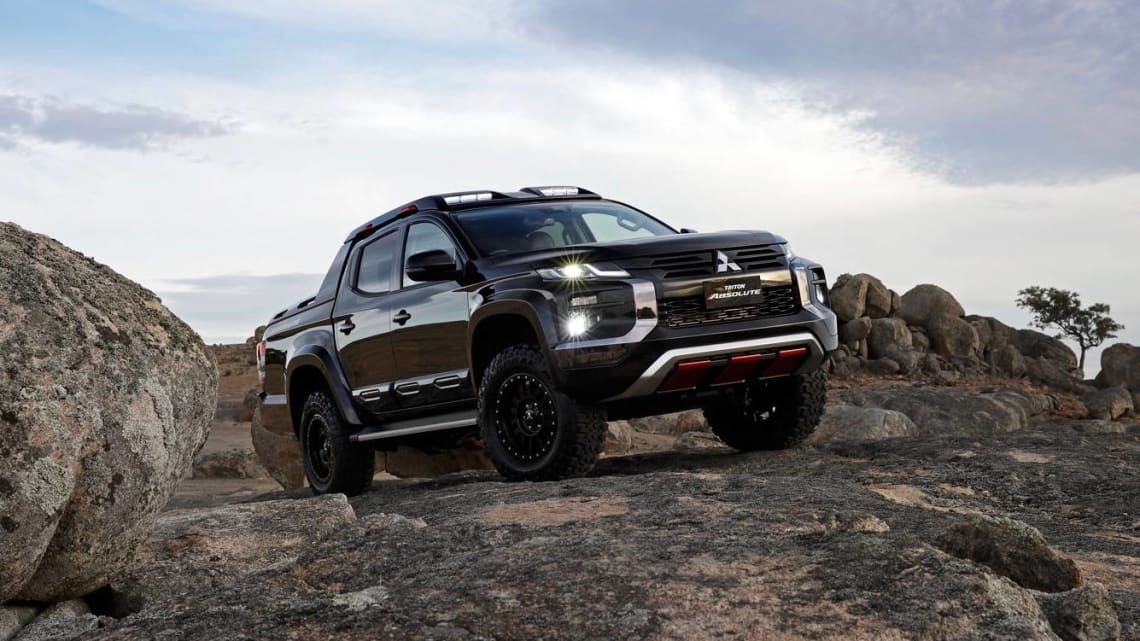 Mitsubishi is something of an unlikely success story.

Despite a relatively old fleet of models (the current Pajero first went on sale in 2006) and only a single passenger car (the Lancer has finally disappeared leaving only the Mirage), the brand continues to be a consistent presence in the top 10 – finishing an impressive fourth in the 2019 sales race.

But that also means there’s potential for growth, with new models that could expand the appeal of the brand even further.

Here are our picks for what we’d like to see in Mitsubishi showrooms in the near future.

In March 2019, Mitsubishi unveiled the Triton Absolute concept at the Bangkok Motor Show, a tougher version of its popular dual-cab ute that would give the brand a rival to the Ford Ranger Raptor and Nissan Navara N-Trek Warrior.

Unsurprisingly Mitsubishi Australia has been pushing its Japanese colleagues to get this new flagship model into production, even though it will need a new badge as the Absolute name is already in use.

Regardless of what it’s called, the continued growth of high-end, well-equipped utes is a market too big and too lucrative for Mitsubishi to ignore for much longer.

The compact Xpander could appeal to bigger families.

The people mover market isn’t a big one, not since the rise of seven-seat SUVs over the last decade. But, as Kia has demonstrated with the Carnival, there’s still sales to be had.

The Toyota Tarago is also now gone, replaced by the more expensive Granvia, leaving most other competitors in the segment to field models based on commercial vans.

The more SUV-like shape of the compact Xpander, and the more rugged Xpander Cross, could appeal to bigger families who need a seven-seater but don’t want such a large van as a Carnival, Hyundai iMax and VW Multivan.

Reports suggesting the Mitsubishi Pajero will be replaced have proven false.

As mentioned earlier, the current Pajero has been around since John Howard was still in office, so it desperately needs a completely new model. Fortunately, if Japanese media reports earlier this year are accurate, a new Pajero could hit the road by 2022.

Given Mitsubishi still managed to sell more than 2800 Pajero in 2019, despite its age, it suggests there is still a loyal following for the famous nameplate.

There have been reports the all-new Pajero will share its underpinnings with the next-gen Nissan Patrol, which would make sense given the alliance between the two Japanese brands, and could pack a hybrid powertrain to future-proof it for the next decade.

The ASX is one of the great motoring success stories of the past decade. Now it’s 10th year on sale (and after four major facelifts), it remains a highly-popular compact SUV.

In fact, it was the most popular small SUV in Australia in 2019, out-selling the much newer and more polished Mazda CX-3, Hyundai Kona and Honda HR-V.

While part of its success is driven by its competitive pricing (and it’s no doubt highly profitable because Mitsubishi hasn’t had to invest in expensive new underpinnings) a totally refreshed model should allow for upgrades to the dynamics, performance and efficiency which might keep it competitive for another 10 years.

The Lancer was a staple of the Mitsubishi range for so long.

Small car sales are in a steady decline, so why should Mitsubishi bother with a new Lancer? Well, as Kia has demonstrated, maintaining a presence in the city- and small-car markets allows for incremental sales growth, while also introducing first-time car buyers to your brand.

As with the Pajero/Patrol, it would make sense for Mitsubishi and Nissan to work together to develop a shared small car platform that could keep costs down – both development and the sticker price.

The Lancer was a staple of the Mitsubishi range for so long, and while the ASX may have replaced it for many, even as recently as 2018, Mitsubishi managed to sell more than 7000 examples of the long-serving small car.

A return of the Evolution

The e-Evolution concept was revealed at the 2017 Tokyo Motor Show.

Using a new ASX as a base, Mitsubishi could bring back its most famous nameplate – Evolution. While it was previously associated with the Lancer (because of its rallying success), the fact is SUVs are more in demand and reviving the small car will be enough of a challenge for Mitsubishi.

More importantly, the company spent years teasing the possibility of taking the ‘Evo’ nameplate and applying it to an SUV.

In 2017 it took the wraps off the e-Evolution concept at the Tokyo Motor Show, a fully electric, triple-motor, all-wheel-drive compact SUV, which was (at the time) rumoured to reach production by 2023. With those specifications it could pack the performance potential to return the Evolution name to its glory days.