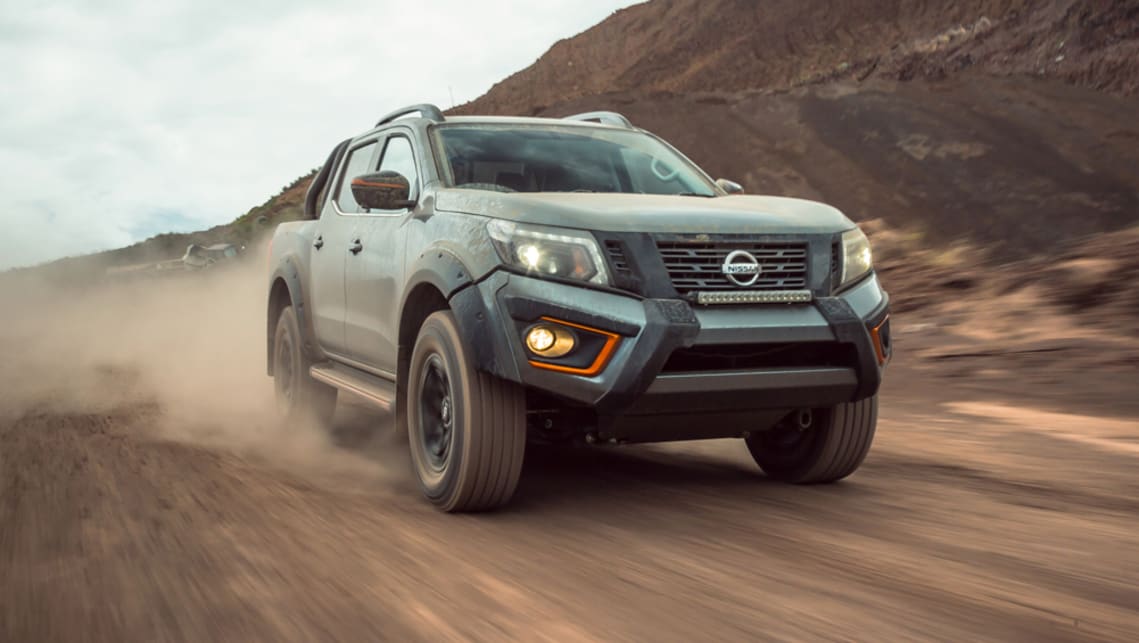 Nissan has uncovered its new flagship dual-cab pick-up, the N-Trek Warrior, that was designed and validated in Australia to take on the likes of Ford Ranger Raptor, HSV Colorado SportsCat and Toyota HiLux Rugged X.

Taking the existing N-Trek, which kicks off at $56,450 before on-road costs, the Warrior adds a number of locally tuned off-road components to boost its capabilities both on- and off-road.

Starting with a lift kit, the Warrior sports a 40mm-higher ground clearance at 268mm, while the approach and departure angles have also been increased by two and one degree respectively to 35 and 29 degrees.

Springs and dampers have also been switched out for more off-road-focused components, while the smaller 17-inch wheels allow for the fitment of 275/70 Cooper all terrain tyres, which contribute 25mm to the Warrior’s lift.

As such, the inner guards have also been reworked to accommodate the wider tyres.

From the front, the Warrior wears a hoopless, body-coloured steel bulbar and 470mm LED light bar, as well as dark orange-coloured foglight bezels.

Springs and dampers have been switched out for more off-road-focused components.

The Warrior’s undercarriage is also beefed up with thicker protection, and the towbar crossmember has been reworked to accommodate a full-sized spare wheel and tyre.

Like its N-Trek donor car, the Warrior features grade-specific exterior decals, while the ‘Navara’ emblazoned tailgate is unique to the flagship variant.

Inside, much of the N-Trek switchgear carries over, meaning an 8.0-inch multimedia touchscreen with Apple CarPlay and Android Auto, partial leather seats with orange fabric inserts, front seat heating and satellite navigation.

The rest of the N-Trek’s equipment also carries over to the warrior, including blacked out fender flares, alloy sports bar, side steps, rear bumper, headlight inserts, door handles, front grille and roof rails.

Likewise, the engine, a 2.3-litre twin-turbo diesel outputting 140kW of power and 450Nm of toque, is also a carryover.

The Warrior’s undercarriage has been beefed up with thicker protection.

Both a six-speed manual gearbox and seven-speed automatic transmission will be available.

With all modifcations fitted, the Warrior retains the same towing capacity and payload rating as the N-Trek, 3.5 tonnes and 923kg respectively.

Despite being assembled by automotive engineering firm Premcar in the Melbourne suburb of Epping, the Navara N-Trek Warrior will still retain Nissan’s five-year/unlimited kilometre factory warranty.

Nissan Australia is yet to reveal pricing on the new N-Trek Warrior, but expect it to nudge closer to the $75,900-mark of the Ford Ranger Raptor.

Nissan will also hope to steal sales away from the HSV Colorado SportsCat (priced from $62,490) and Toyota HiLux Rugged X (from $62,490), that both feature a number of off-road-focused enhancements.

Production on the Navara N-Trek Warrior begins in November for a December on-sale date.