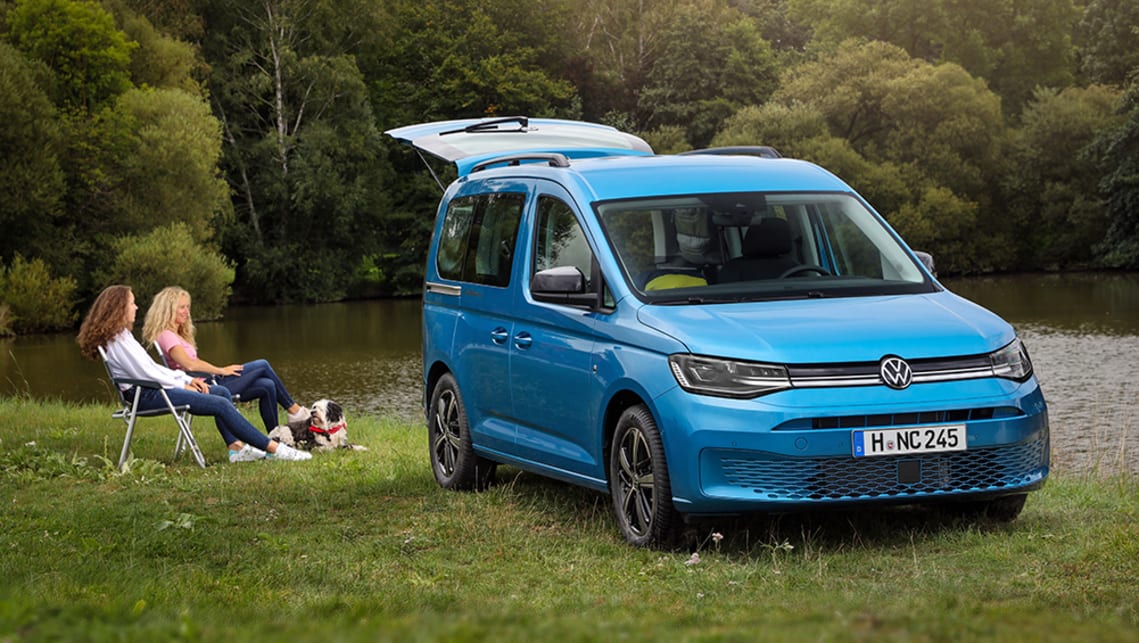 Volkswagen has revealed the next-generation Caddy camper van, with the new lifestyle model named California instead of Beach.

Based on the fifth-generation Caddy light-commercial vehicle that was revealed in February, the California is available with a standard or long wheelbase, meaning it measures either 4501mm or 4853mm in length respectively.

Either way, the California comes with a fold-out bed (1980mm long and 1070mm wide) with cup springs and a mattress. It folds to a third of its size and is stored above the boot space. Alternatively, a free-standing two-person tent with ‘air poles’ can be had as an accessory.

Of note, the second row of seats can be removed if more interior space is required, with it no longer part of the bed set-up. And an optional 1.4m2 panoramic sunroof ensures there is a nice view inside at all times.

But when it is time to sleep, there are curtains available for all windows. They are secured by magnets for the front-side and rear glass, but they are also locked in by fasteners for the windscreen and panoramic sunroof.

The rear-side windows are instead covered by a storage bag system, which can take items weight up to 5kg on each side. And to aid ventilation, fly screens are integrated into the front doors, between the glass and frame.

However, it’s the California’s optional mini kitchen that really impresses, with it hinged to the left boot space well, beneath the bed. When the tailgate is open, it can be pulled out and used without fear of rain while cooking.

The mini kitchen has two parts, with a single hob gas cooker with a windshield and a shelf integrated into the top, while a cutlery tray and storage space for cooking utensils and provisions are found at the bottom.

And yes, there’s even a securely locked box with a floor vent for a 1.85kg base bottle. As a result, the California is technically classified as a motor home. Naturally, a table and two chairs are on hand, stowed in a bag underneath the bed.

The California has 55kW and 90kW turbo-diesel engine options available from launch, and while front-wheel drive is standard, Volkswagen’s 4Motion all-wheel-drive system is an option.

While the new Caddy LCV will enter Australian showrooms early next year, the California doesn’t have a local launch date yet, with 120 examples of its Beach predecessor sold in 2019 as a toe-in-the-water exercise to gauge buyer interest.

Volkswagen ruled the experiment a “success” and will “absolutely” look to bring in niche models like the California as special editions in the future, so stay tuned.