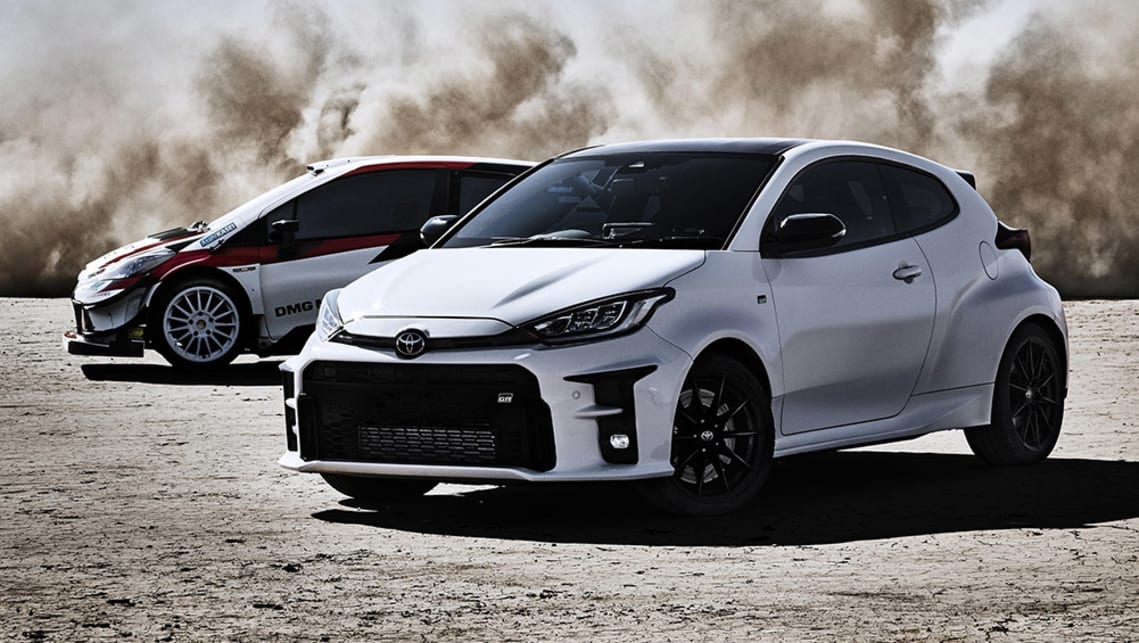 New Toyota Yaris GR 2020 vs the world: Does the latest hot hatch stack up to the best?

Toyota’s Yaris GR has gone official, packing a healthy 200kW of power and 370Nm of torque from its 1.6-litre three-cylinder engine, but how does it compare to the reigning hot hatch champions?

As a result, Toyota promises the Yaris GR will accelerate from zero to 100km/h in less than 5.5 seconds.

Its nearest competitor for size is the Ford Fiesta ST Performance, which also uses a three-cylinder engine, albeit with a 1.5-litre displacement, to produce 147kW/290Nm.

Ford’s baby hot hatch also makes use of a six-speed manual gearbox, but sends drive exclusively to the front wheels.

In Ford’s favour though, the Fiesta ST Performance will sport a Quaife limited-slip differential and launch control to shoot it from 0-100km/h in 6.7s.

The VW Polo GTI is also in the same light-hatch segment, but uses a 2.0-litre four-cylinder engine for an output of 147kW/320Nm, but sends drive to the front wheels through a six-speed dual-clutch automatic transmission for a 6.7s 0-100km/h time.

Pricing for both the Fiesta and Polo are an identical $31,990 before on-road costs, but given the Yaris GR’s inflated performance, expect to see an inflated pricetag to match.

In fact, the Yaris GR could very well be priced close to, if not more than, hot hatches in a size-class above, such as the Hyundai i30 N, VW Golf GTI, Ford Focus ST, Subaru WRX and even the much-lauded Honda Civic Type R – all of which are powered by 2.0-litre turbo-petrol engines.

All four aforementioned models are also slower to 100km/h than the Yaris GR, despite differing engine outputs with acceleration times of 6.1, 5.7, 6.0 and 6.2s respectively for the six-speed manual i30 N, manual and automatic Focus ST, three-pedal WRX, and dual-clutch auto Golf GTI.

There is also the Renault Megane RS to consider, which uses a 205kW/390Nm engine in Sport and Cup trim and is priced from $45,990.

Drive is sent to the front axle in the French hot hatch, enabling a 0-100km/h sprint time of 5.8s.

The 228kW/400Nm Honda Civic Type R is on the pricier end of the small hot hatch segment at $51,990 and, despite being a front-driver, can match and often outpace its all-wheel-drive competitors such as the Ford Focus RS, VW Golf R and Subaru WRX STI.

In spite of its on-track performance, the six-speed manual-only Civic Type R is still slower than the Yaris GR in the landmark 0-100km/h sprint, managing a time of 5.7s.

It’s only the aforementioned all-paw Focus RS, Golf R and WRX STI that will beat the Yaris GR’s 0-100km/h time, but the Ford is currently unavailable as the world waits for a new-generation model, and the VW and Subaru wear pricetags starting from $52,140 and $54,990 respectively.

A big piece of the puzzle will be how much the Yaris GR costs, and early speculation is pointing to a figure in the mid-$40,000s, but given the performance potential on offer, would that price be justified?

We’ll have to wait until the vehicle launches locally in late 2019 to find out how it stacks up in the bends, as well as on Aussie roads, but given the taster we had in an overseas preview drive, Toyota has delivered an ultra-capable hot hatch.