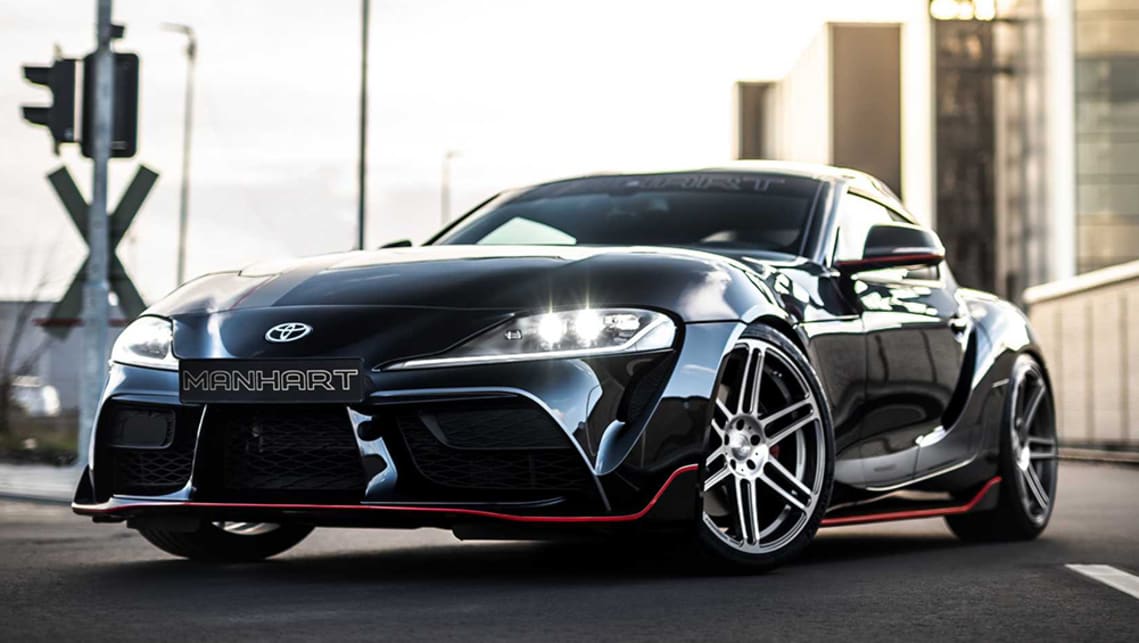 BMW-tuning specialist Manhart has wrung extra performance out of the Z4 platform- and engine-sharing Toyota Supra, taking outputs to 336kW/650Nm.

Dubbed the Supra GR 450, representing its new power output in metric horsepower, Manhart has liberated the extra grunt with an ECU retune and stainless-steel rear silencer.

Buyers can also opt for either black or carbon-fibre finish on the exhaust outlets, as well as a Manhart downpipe and high-flow catalytic converter.

Not content to just turn up the wick on the engine though, Manhart also offers lowered H&R springs or KW Variant 3-coilover suspension with bespoke tuning for better cornering.

To top it all off, the Manhart Supra GR 450 also gains a unique look thanks to body-wide decals with red accent striping, as well as staggered 20-inch Concave One alloy wheels finished in gloss or matt black.

The extra punch is an 86kW/150Nm gain over the standard Supra’s 250kW/500Nm output from the 3.0-litre turbocharged inline six-cylinder petrol engine, and puts the Toyota coupe in contention against the likes of the 331kW/600Nm Audi RS5 Coupe, 331kW/550Nm BMW M4 Competition and 351kW530Nm Lexus RC F.

Performance figures are yet to be revealed for the tuned Supra, but a stock car will accelerate from zero to 100km/h in 4.4 seconds with drive sent to the rear wheels via an eight-speed automatic transmission.

Pricing for the Supra GR 450 pack is also yet to be revealed, but each individual component can be purchased from Manhart’s online store.

The Toyota Supra and BMW Z4 are also getting a power bump from factory next year, taking outputs to 285kW/500Nm.