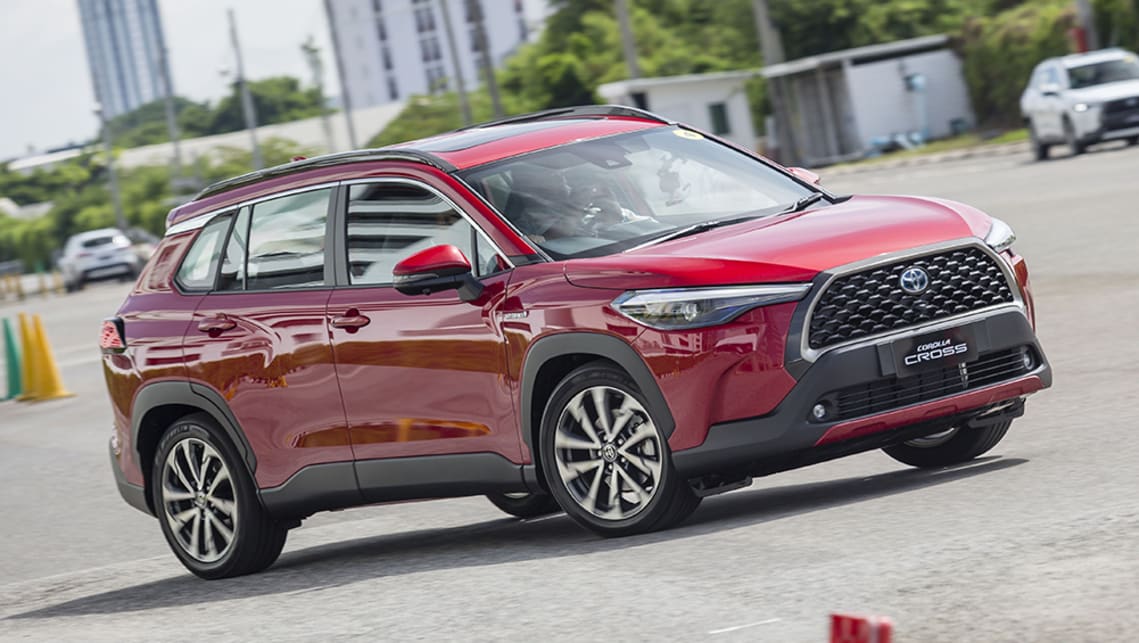 Toyota is set to supercharge its domination of the SUV sphere and possibly even change the way Australians buy small cars with the all-new Corolla Cross – a hybrid in more ways than one – when it in late 2022.

Built on a variation of the TNGA-C platform that underpins the Corolla as well as Toyota’s current small SUV, the C-HR, it’s fair to view the Corolla Cross as a restyled and raised Corolla wagon, and is thus constrained by size and shape to the small-car field. The clue is in the name: Cross for crossover. It will be the second Toyota ‘Cross’ car, after the all-new Yaris Cross launches in August.

Vitally, the Corolla Cross will be built from launch in Thailand alongside the existing Corolla sedan, instead of in Japan like the Corolla hatch and much-larger RAV4, where manufacturing costs are higher. This should help keep prices extremely competitive – lower even than either the C-HR, which (like the RAV4) also features more expensive and sophisticated independent rear suspension instead of a torsion beam arrangement as per the Corolla Cross.

If all this sounds a little familiar to regular CarsGuide readers, it is exactly the same formula Mazda uses with the CX-30, which is a Thai-built, raised crossover/wagon version of the current Mazda3 small car that – for Australia – is sourced out of Japan.

Where the Corolla Cross is set to run away from all its rivals, however, is its availability of a proven hybrid option within an affordable, family friendly crossover package – something that has catapulted the latest RAV4 to market leadership as well as long waiting lists, as Australians finally come around to the fuel-consumption benefits and low running costs of hybrids. At the halfway point of 2020, one-in-five mid-size SUV sales went to the RAV4 – an unprecedented level of domination for the class.

At present, the only powertrain announced for the Corolla Cross centres around a 1.8-litre four-cylinder engine/CVT combination, offered in either 103kW/177Nm 1.8-litre naturally aspirated petrol or 72kW/142Nm petrol-electric version, with the latter adopting a 53kW/163Nm electric motor for a combined maximum output of 90kW. Both are front-wheel drive only.

Subaru, of course, is enjoying success with its conceptually similar XV Hybrid, but that car is very obviously related to the Impreza small car and is thus constrained by its hatchback body-style and accompanying small boot.

If Toyota can price and position the Corolla Cross as a high-riding crossover family car starting at under $30,000, it should enjoy the same, enthusiastic buyer response that the RAV4 does, while still being ‘Corolla’ enough for small-car buyers seeking a compact and practical runabout to buy.

Lastly, the Corolla Cross is just another name for a long line of high-riding Corolla-based small crossovers Toyota has offered since the early 1980s, revealing how forward-thinking Japan’s number one carmaker was nearly 40 years before Corolla Cross’ unveiling and more than a decade before the pioneering RAV4 debuted.

Australians received their first taste of a car-based Toyota crossover with the L20-series Tercel 4WD wagon in 1983. Aimed at the popular Subaru Leone 1800 Sportwagon, it gained a solid niche following but was discontinued in 1988 for the larger AE95 Corolla wagon 4WD that sold steadily until the RAV4 burst on to the scene in early 1994. The rest, as they say, is history.

Will the Corolla Cross have the same impact when it arrives in late 2022? Don’t bet against it.