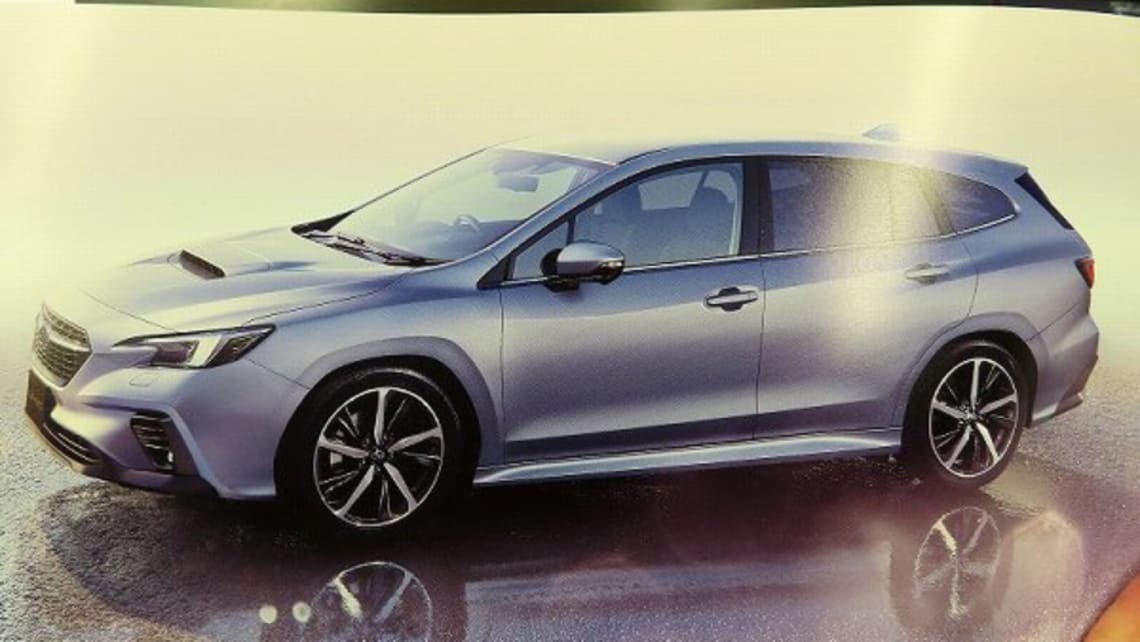 The images include the not-before-seen cabin, which includes a large tablet-style 11.6-inch multimedia touchscreen, as seen in the US-market Liberty and soon-to-arrive-in-Australia Outback, as well as a 12.3-inch digital instrument cluster, a new flat-bottom steering wheel, a raised centre console treatment and a much more modern layered dashboard design.

The new Levorg’s interior was leaked to Japanese press.

Further details leaked from the dealer materials include a 561-litre (VDA) boot capacity (up from the current car’s 489L boot) and a not-before-seen new touch control system for the electric tailgate.

According to Japanese media, there is a touch sensitive panel in the Subaru badge on the rear which activates the tailgate so long as the key is within proximity.

The new Levorg will have a much larger boot and new convenience features.

Pricing and specs for the Japanese market have also been partially leaked, revealing that the new ‘lean-burn’ 1.8-litre four-cylinder boxer engine debuting in the Levorg has power outputs of 130kW/300Nm (up from the outgoing entry-level 1.6-litre engine which produces 125kW/250Nm). There is no word from the new leaks on a rumoured 2.4-litre turbo engine option.

According to Japanese media, the Levorg will also debut the next iteration of Subaru’s EyeSight safety technology which was touched on by Subaru Australia at a press briefing earlier in 2020. The new suite (apparently dubbed EyeSight X) will include 360-degree monitoring (much like Tesla vehicles), a new adaptive cruise control system with navigation integration, as well as an auto-SOS feature.

We already know the Levorg will be 65mm longer, 15mm wider, and 10mm lower than the outgoing car, with a wheelbase extension of 20mm. Previous information also suggested active dampers will come to the Levorg range for the first time.

This single official image of a production version of the 2021 Levorg appeared in a Japanese Subaru teaser earlier this year.

It is unclear how many of these features will reach the Australian market, or when the new Levorg will arrive. The next Subaru product to hit our shores will be the new-generation Outback by the end of 2020.

It is understood the Levorg’s new 1.8-litre engine is a stop-gap measure as Subaru gears up for mass electrification of its lineup by 2030. The brand says it will not bring in new nameplates for electrified models like its rivals, but will gradually electrify its existing nameplates.