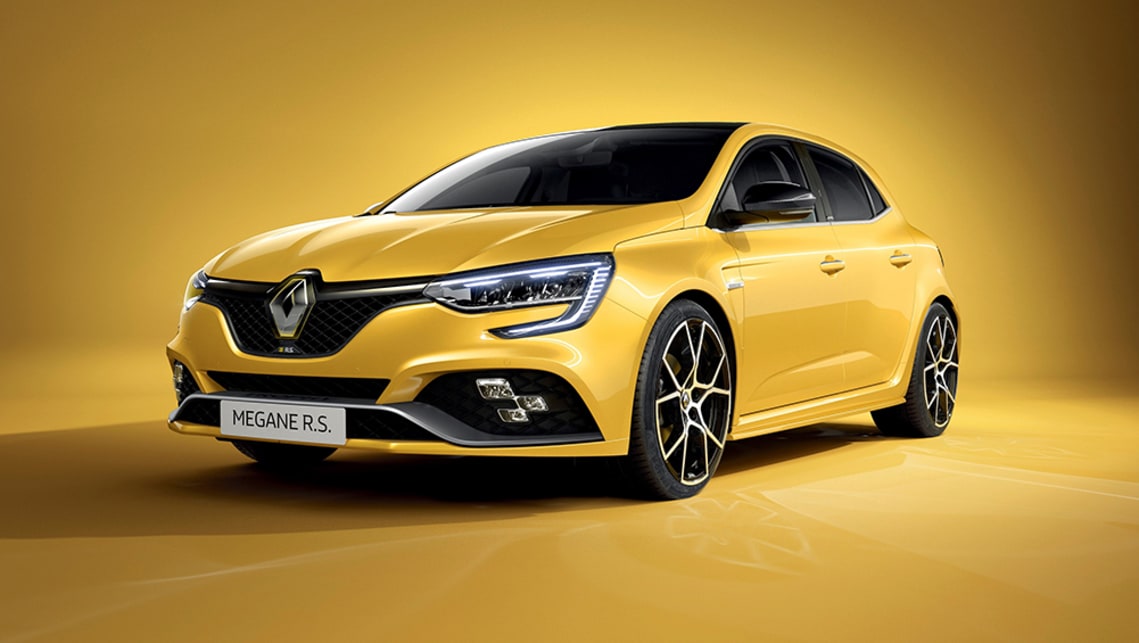 Renault has revealed a mid-life facelift for its Megane RS, which is headlined by an increase in entry-level power that will push the new line-up to the front of the hot-hatch pack when it arrives in Australia in about a year’s time.

While the model’s 1.8-litre turbo-petrol four-cylinder engine carries over, power has been boosted from 205kW to 221kW in the Sport grade, while torque jumps to 400Nm (+10Nm) and 420Nm (+30Nm) when mated to the manual and automatic transmissions respectively.

“This gain in power translates into better acceleration, even at high revs, while the torque – one of the best in the category – brings renewed driving pleasure and enjoyment,” Renault said in a statement.

If the Cup’s outputs sound familiar, it’s because they were previously the reserve of the flagship Trophy grade, which returns without engine tweaks.

Speaking of grades, the mid-range Cup has been axed, with its focused chassis (mechanical Torsen limited-slip differential and stiffer shock absorbers, springs and anti-roll bars) now only offered in the Trophy.

Blink and you’ll miss it; the Megane RS has redesigned LED tail-lights.

For both grades, drive is still sent exclusively to the front wheels via either a six-speed manual or a six-speed EDC dual-clutch automatic.

As part of the facelift, the Hyundai i30 N-rivalling Megane RS also gets tweaked LED headlight and tail-lights and fresh sets of alloy wheels.

Inside, it picks up a 9.2-inch touchscreen multimedia system (up from 8.7 inches), a 10.2-inch digital instrument cluster, an RS Monitor that displays key vehicle data in real time, new climate controls and a redesigned steering wheel.

Meanwhile, an upgraded suite of advanced driver-assist systems will enable Level 2 self-driving, with the Megane RS able to stay in its lane and maintain a safe distance from the vehicle in front at speeds up to 160km/h.

A Renault Australia told CarsGuide the Megane RS will continue to be part of its product plan, “with Australian vehicles expected to go into production towards the end of this year”, adding it’s too early to confirm an official launch date.

The Megane RS has taken a big technological step forward inside.

For reference, the full-time Megane RS line-up currently ranges in price from $45,990 plus on-road costs for the manual Sport to $55,990 for the automatic Trophy.

Renault has also uncovered facelifted versions of the non-performance Megane variants, which were discontinued in Australia last year due to limited demand.

That said, there is a possibility they could return, with the spokesperson telling us Renault Australia is “currently reviewing the case”.

This study also includes the Megane’s new plug-in hybrid variant, dubbed E-Tech, has joined the range as part of the facelift.

It pairs a 1.6-litre naturally aspirated four-cylinder engine with two electric motors for a power output of 119kW. With a 9.8kWh lithium-ion battery in tow, claimed electric-only driving range is 50km (WLTP).