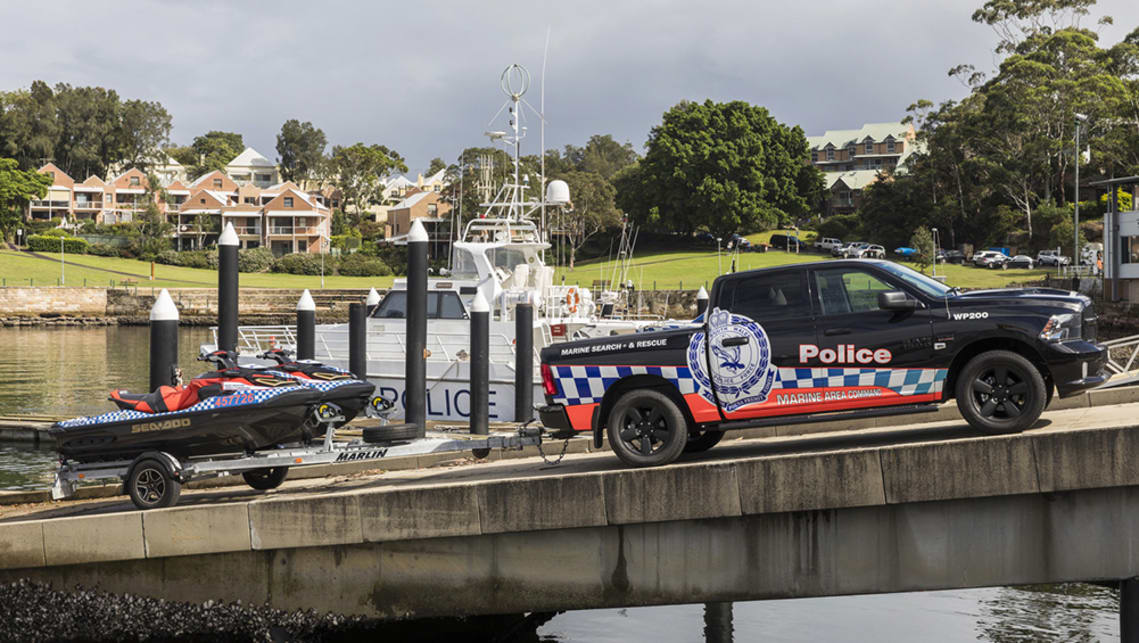 New South Wales Police have taken delivery of another Ram pick-up, this time a 1500 to serve in its Marine Command division to tow jet skits and rigid inflatables in and around the state.

The full-sized ute will be based at the NSW Police Marine Area Command (MAC) centre in Balmain, Sydney, but is expected to travel up and down the coast while on duty.

As with all Ram 1500 utes, the police vehicle is powered by a 5.7-litre Hemi V8 that punches out 291kW/556Nm to all four wheels via an eight-speed torque converter automatic transmission.

NSW Police Marine Command boss Stephen Hergarty said the grunt and towing capacity afforded by the Ram 1500 was key to its enlistment.

“These trucks go everywhere in NSW with the MAC enforcement team, from Tweed Heads down to the Murray,” he said.

“The 4.5-tonne max brake towing is incredibly useful as it allows us to easily tow up to four jet skis at a time – or one of our bigger rigid inflatables – out to Dubbo, for example, for the Commissioner’s Rise Up youth program, compliance around boat safety on the water, or the South Coast to assist in recent bushfire evacuations.”

The local right-hand-drive conversion process done in Melbourne also helped the Ram 1500 get across the line, Mr Hergarty added.

“That we’re able to support local manufacturing is certainly a factor in our decision-making process,” he said.

“The requirements we need to operate within means we have to be on top of our game when it comes to towing capacity and how we enforce the law – we can’t be underweighted on tows, so the Ram 1500 fits the bill perfectly.”

Aside from the powertrain and obvious livery, the police Ram 1500 also includes the brand’s cargo management system that features a lockable gun box.

Last year the NSW Police also took delivery of a Ram 2500 to assess its capabilities on duty.