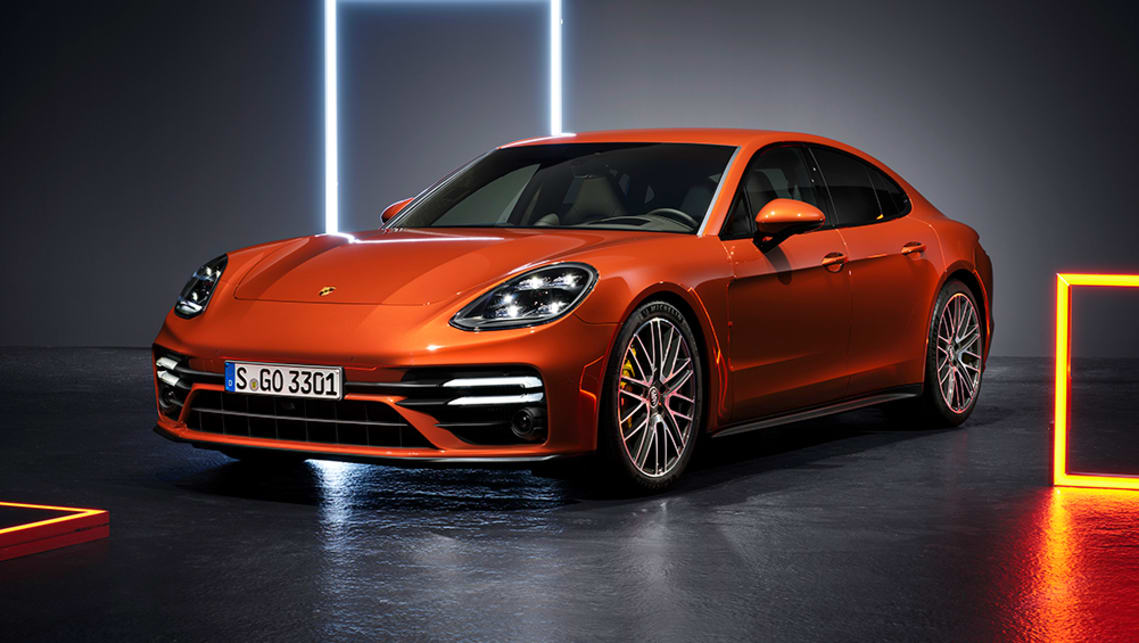 Porsche has revealed the second-generation Panamera’s midlife facelift, with the upper-large car to double down on its performance credentials when it arrives in Australia in December with a new Turbo S flagship that’s quicker than most supercars.

The Turbo S succeeds the Turbo – and possibly the conspicuous-by-its-absence Turbo S E-Hybrid plug-in hybrid (PHEV) – by taking its 4.0-litre twin-turbo V8 petrol engine and increasing peak power by 59kW, to 463kW, and maximum torque by 50Nm, to 820Nm.

Of note, the new Turbo S is only available as a sedan in Australia, at $409,500 plus on-road costs, with the Panamera’s Sport Turismo wagon body-style not set to be part of the local grade, which is $18,200 dearer than its predecessor.

The Turbo S sedan’s superior outputs mean it outperforms both the pre-facelift Turbo and 500kW/850Nm Turbo S E-Hybrid sedans by completing the zero-to-100km/h sprint in just 3.1 seconds while on the way to its top speed of 315km/h, 0.7s and 9km/h and 0.3s and 5km/h better than the former and latter respectively.

In Australia, the unnamed entry-level sedan has returned but swapped its 3.0-litre single-turbo V6 petrol engine for a 2.9-litre twin-turbo unit, although its outputs are still 243kW/450Nm. In better news, its pricing has decreased by a massive $19,100, to $199,500.

The same is true of the 4 sedan, which is all-wheel drive instead of rear-wheel drive – just like the rest of the range, which has an eight-speed PDK dual-clutch automatic transmission as standard – although its price has been reduced by $19,300, to $209,700.

Compared to the pre-facelift 4 E-Hybrid and Turbo S E-Hybrid, the 4S E-Hybrid has a larger lithium-ion battery (up 3.8kWh to 17.9kW), helping to improve electric-only driving range by up to 30 per cent, to 54km (WLTP).

Conversely, the GTS grade is back and still has a version of the Turbo S’ engine under the bonnet, although its peak power has been lifted from 338kW to 353kW, while maximum torque has held steady, at 620Nm.

Visually, the facelifted model stands out from the second-generation Panamera crowd with the Sport Design front fascia, which is now standard range-wide (excluding Turbo S) and therefore no longer an option for most variants (it was already fitted to the GTS).

The Turbo S goes it alone with a new, bespoke front fascia featuring larger air intakes and dual foglights instead of single items. It also has a body-colour insert.

At the side, the Panamera has three fresh sets of 20- and 21-inch alloy wheels to choose from, while its rear end features a new tail-light design that’s full-width and incorporates redesigned LED clusters, which are darkened in the GTS.

The Panamera adaptive dampers have been revamped to improve comfort, while tweaked active anti-roll bars increase control. The power steering system has also been given a once-over, while new-generation tyres are fitted.

Standard equipment has also been boosted in Australia, with a speed-sensitive power steering system, adaptive LED Matrix headlights, a head-up display and blind-spot monitoring now fitted range-wide, having previously been the reserve of the Turbo S E-Hybrid.

Soft-close doors and cooled front seats are now standard in the unnamed entry-level and 4 grades to match the rest of the range, while the GTS gets a sports exhaust system. The latter also picks up an ioniser alongside the 4S E-Hybrid and Turbo S, which adds 18-way power-adjustable front sports seats with memory functionality.