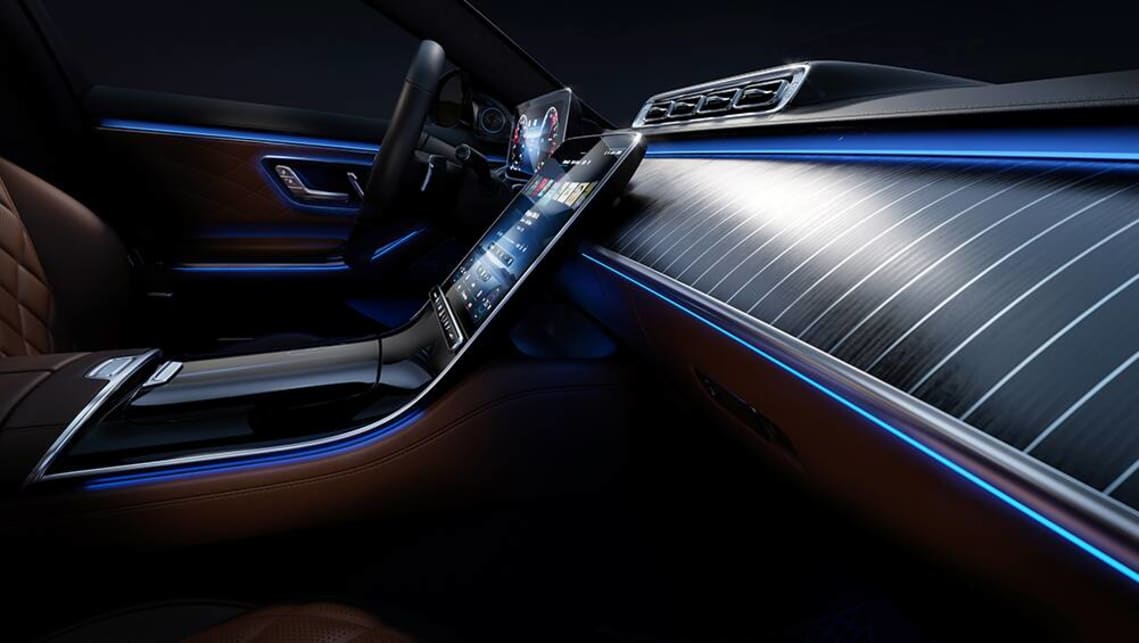 According to Mercedes-Benz, “modern luxury attains the next level in the interior of the S-Class”, which will officially enter its seventh generation upon its reveal on September 2, with Australian deliveries expected to start next year.

Ahead of the new upper-large sedan’s reveal, though, Mercedes-Benz has once again released more details on it, this time focusing on its luxuriousness.

The next-generation cabin of the S-Class continues to be revealed in small sections, with the entirety of the cockpit now uncovered, including the simplified dashboard design, which has been inspired by yachts and therefore become as horizontal as it gets.

As reported, the new flagship model does away with 27 physical buttons in favour of a portrait-orientated 12.8-inch central touchscreen, which is powered by Mercedes-Benz’s upgraded MBUX multimedia system.

This ‘floating’ unit rests on an angle against the middle dashboard, which is dominated by “unusually large” trim, an element that is now featured throughout, even acting as a divider between the two rear occupants in examples fitted with the First Class suite package.

While various trim options are available, Mercedes-Benz is particularly proud of the open-pore wood veneer pictured here, which is “permeated by delicate, form-following inlays made of real aluminium”, but we digress.

Active ambient lighting has also been introduced, with it comprised of about 250 LEDs – or one bulb every 1.6 centimetres in the fibre optics – making it up to 10 times brighter than its predecessor (20 levels are available), so much so that it’s easy to see in daylight.

This feature is now functional, too, with it reinforcing alerts, such as for the autonomous emergency braking, lane-keep assist and exit warning systems, by turning red, while ‘impulses’ are visible when adjusting the climate controls in individual zones.

Five new-generation seat options are available, all of which are upholstered in leather that has a three-dimensional design via its perforation and hand-stitching. Even the pillows attached to the rear headrests are now heated, acting as neck warmers.

The seats are more adjustable, especially when it comes to reclination, and now feature radial fans for cooling, and six air bladders for massaging, which are located closer to the surface in order to be more clearly felt.

Better yet, the front headrests feature integrated speakers as part of the surround-sound system, which is able to more easily direct zone-specific information, such as turn-by-turn directions for the driver.

Speaking of which, don’t make the mistake of thinking the driver doesn’t much attention, as their seat and the steering wheel and side mirrors can be automatically adjusted to create the optimal – but readjustable – driving position by simply entering their height in MBUX.

Of course, there’s more luxury to the new S-Class than trim and leather, with interior space significantly increased in all zones, which can individually take advantage of the updated Energising Comfort Control system, which combines various features to suit certain moods.

The Refresh, Vitality, Warmth, Joy and Comfort programmes have all been tweaked to integrate new features, and passengers are now able to join another individual’s running programmes or suggest their own to another occupant.

This set-up can even use artificial intelligence (AI) to suggest programmes to occupants, based on information regarding their sleep quality and stress level supplied by their smart device/s as well as vehicle and trip data. It also uses eyelid tracking for suggestions.

Air quality is also better in the new S-Class, with Energising Air Control able to effectively filter fine dust, pollen and odours. And, of course, the Air Balance package with an ioniser and unique fragrances remains available.

As always, Noise, Vibration and Harshness (NVH) levels have been a particular focus with the new S-Class, with advanced ‘noiseless’ measures taken to help it compete with near-silent electric vehicles (EVs), including Mercedes-Benz’s own EQC mid-size SUV.