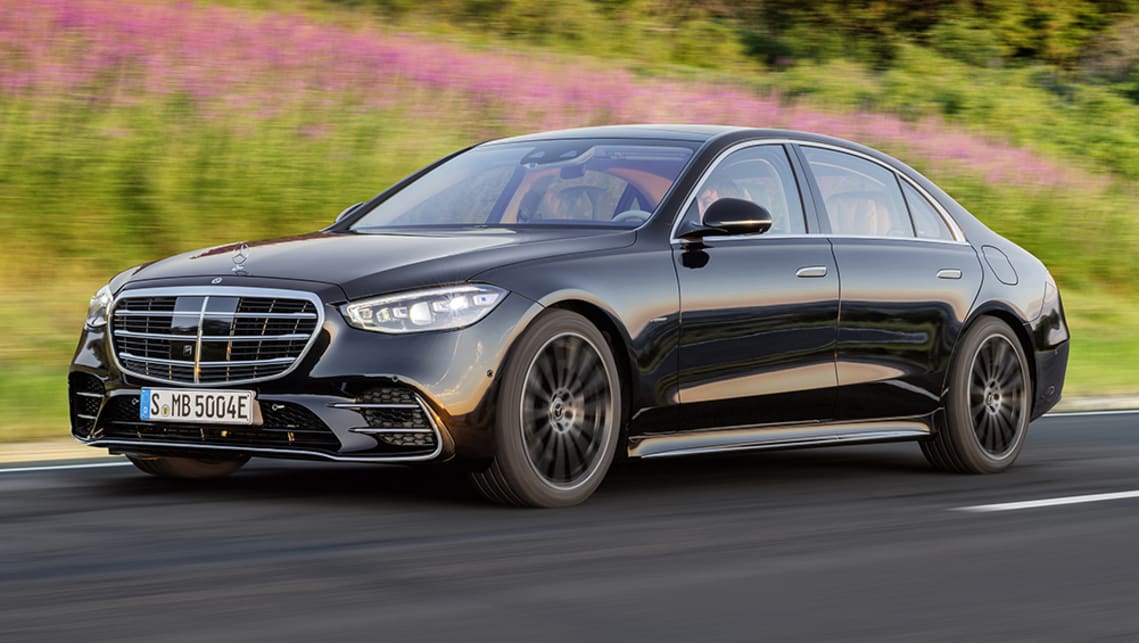 Mercedes-Benz has finally lifted the lid on its all-new seventh-generation S-Class flagship sedan, which will land in local showrooms in the second quarter of 2021 with cutting-edge in-cabin technologies and new safety features.

Overseas, the new S-Class will be offered with one of four engines at launch – two petrol and two diesels – paired to a nine-speed automatic transmission.

All four variants are fitted with Mercedes’ 4Matic all-wheel-drive system, though the S350d can be had in rear-wheel-drive guise.

Mercedes-Benz Australia has confirmed the S-Class will launch in S450 guise with “more details about the full local line-up available closer to its launch”.

Under WLTP examination, the diesel-powered S-Class’ return between 6.5-8.0 litres per 100km depending on configuration, while the petrol-powered vehicles hover between 7.8-9.5L/100km thanks in part to the inclusion of a 48-volt mild-hybrid set-up.

Mercedes is also promising a V8-powered S-Class soon after launch, as well as a plug-in hybrid variant with around 100km of range coming down the line.

This makes the new S-Class bigger in all dimensions barring width, which translates to more rear leg- and elbow-room for passengers. Of note, the new model does feature less rear shoulder-room.

Boot capacity is also 20 litres bigger at 550L, though the volume is affected by optional equipment such as reclining rear seats and a refrigerator box, as well as the plug-in hybrid powertrain.

Exterior styling of the new S-Class is evolutionary rather than revolutionary for a three-box sedan, but it now boasts retractable door handles.

Of course, being an S-Class, the interior is swathed in soft-touch Nappa leather, with various finishes and colours available including red, white and tan.

Front occupants are treated to electronically adjustable seats (19 different ways for the driver), while a massaging function is also available.

The rear seats can be configured in five different ways, while small touches include a heated headrest.

Up to four other screens can be found peppered throughout the interior, while the driver display features a 3D effect and the head-up display can have augmented reality functionality to overlay turn-by-turn directions over the road ahead.

The MBUX system, and more than 50 other electronic components, can also be updated over-the-air to run the latest software or unlock features down the road.

There are also 250 adjustable LEDs littered throughout the cabin to change mood lighting, but also works in conjunction with the safety systems as a visual warning to occupants about any incoming dangers.

As previously reported, buyers can option an E-Active Body Control suspension pack that will raise the side of the S-Class if it detects an imminent side impact to reduce harm to passengers.

Rear-axle steering is also an option for the new S-Class, which can reduce the turning circle by 1.9 metres for easier manoeuvrability in inner-city environments.

These technologies will also tie into the semi-autonomous driving capabilities of the S-Class, which can be further enhanced with the optional Drive Pilot technology that will allow Level 3 self-driving.

Full functionality won’t come on stream until the second half of 2021, and only in certain markets around the world, but it will allow the S-Class to drive itself “in situations where traffic density is high or in tailbacks, on suitable motorway sections in Germany” so that drivers can “undertake secondary activities such as browsing on the internet or dealing with emails”.

Other automated functions include parking/unparking via smartphone and entering/exiting multi-storey carparks.