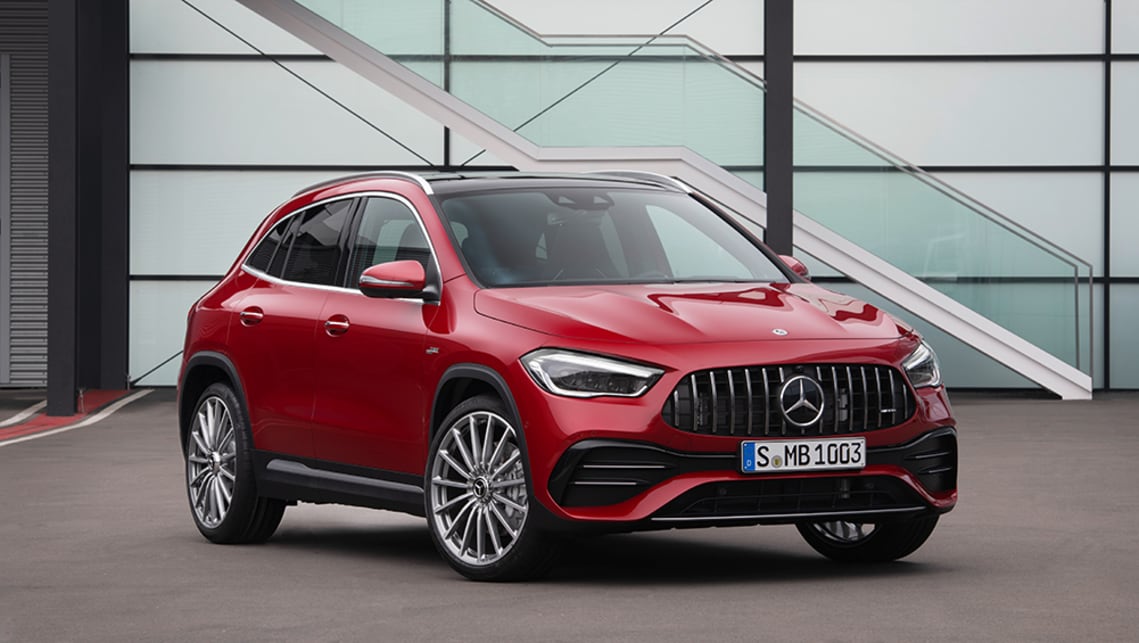 Mercedes-Benz has revealed its second-generation GLA small SUV, with an Australian launch scheduled for the third quarter next year.

Unsurprisingly, there are many similarities between the BMW X1-rivalling GLA and the A-Class small car, which was the first member of Mercedes-Benz’s next-generation small-vehicle family.

In fact, exterior design is the GLA’s biggest point of difference, with it forgoing the sleekness of the A-Class for a much buffer look that befits an SUV of any size. That said, it’s still very aerodynamic, with a drag coefficient of 0.28.

As such, the GLA offers more front headroom (+22mm) and rear legroom (+116mm) than its forebear, while cargo capacity is up 14L, to 435L, with the split-fold rear bench upright.

That said, the GLA’s origins are most apparent inside, with it more or less sharing its cockpit design with its siblings, steering wheel and all.

While the new GLA does look quite buff, it’s actually rather aerodynamic, too.

Specifically, a central touchscreen sits side by side with a digital instrument cluster behind a single pane of glass, which is flanked by five turbine air vents and a single row of physical climate controls.

Several engine options are available, but only the GLA200’s 120kW/250Nm 1.3-litre turbo-petrol four-cylinder engine and AMG GLA35’s 225kW/400Nm 2.0-litre unit have been detailed at the time of writing.

Turbo-diesel four-cylinder and plug-in hybrid options are promised, though, but the latter is likely to launch after its internal-combustion counterparts.

The front-wheel-drive GLA200 and all-wheel-drive AMG GLA35 are both mated to dual-clutch automatic transmissions, with the former getting seven speeds, while the latter gets one more.

Look familiar? The new GLA shares its cockpit with the A-Class and other recent Mercedes-Benz small cars and SUVs.

The zero-to-100km/h sprint takes 8.7 seconds for the GLA200, while the GLA35 makes its performance focus known with a 5.1s effort (if it’s signature Panamericana grille wasn’t enough of a giveaway).

The GLA features Mercedes-Benz’s latest suite of advanced driver-assist systems, including a version of autonomous emergency braking that operates up to 60km/h when detecting pedestrians and stationary vehicles.

Unlike the A-Class, the GLA features multi-link rear suspension as standard, while the front axle features MacPherson struts. The AMG GLA35 goes one step further with adaptive dampers.

Mercedes-Benz Australia says pricing and specification details for the new GLA range will be confirmed closer to its launch, while an AMG GLA45 flagship with up to 310kW/500Nm is expected further down the line.