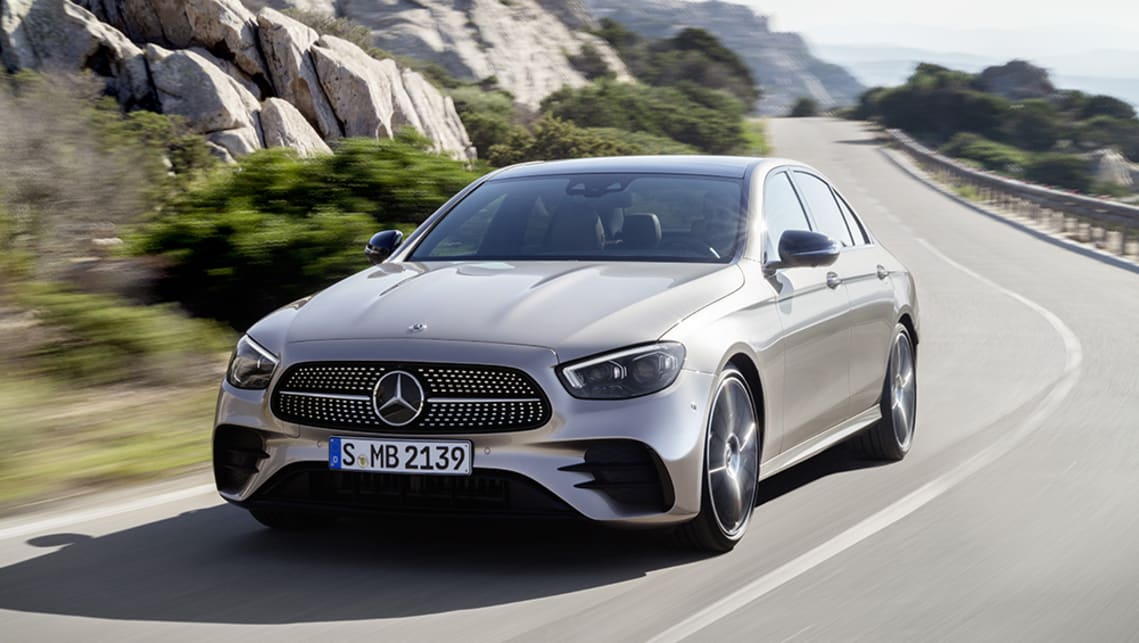 Mercedes-Benz has given the E-Class sedan a thorough visual update, with the facelifted version of the luxury saloon adding a lot of additional technology and safety features.

The exterior changes include a revised front-end look with a newly shaped bumper, grille and LED headlights, and the rear has seen newly designed tail-lights, a new boot lid and revised rear bumper, too.

The company has also stepped things up in the cabin, with a new steering wheel the focal point for the changes. The multi-spoke wheel now has different prongs for different jobs: the upper spokes are to control the driver info screen and media screen, while the lower spokes are for cruise control and phone controls.

The wheel ‘buttons’ are touch-capacitive, and have haptic feedback – plus the steering wheel has a hands-off capacitive sensor, rather than a torque sensor. If the sensors don’t detect the driver’s hands on the wheel, a “cascade” of warnings will commence, eventually activating Emergency Brake Assist in case of a medical emergency.

As with the previous version, E-Class models come with a pair of large screens, but the brand’s MBUX voice control system is new in the update, and in some markets the sat-nav system uses augmented reality and the car’s cameras to show you your way.

The multi-spoke wheel now has different prongs for different jobs: the upper spokes are to control the driver info screen and media screen, while the lower spokes are for cruise control and phone controls.

The car’s cameras can now also allow the vehicle to park in marked bays autonomously – not just the parallel and perpendicular spaces as before. And when parked, a new optional system, dubbed Urban Guard, can keep an eye on the car using its camera system to ensure it isn’t damaged or vandalised – it’s a similar system to Tesla’s Sentry mode, and will advise the driver via their smartphone app if something isn’t right.

Further safety changes include Active Distance Assist Distronic adaptive cruise control with route-based speed adjustment (it can use map data and traffic sign recognition to adjust speed), traffic jam assistance, and there’s a new program called PowerNap as part of the plug-in hybrid models, which is designed to relax the driver while they recharge.

When it comes to engine options, there is a breadth of options for buyers. The company will have seven plug-in hybrid powertrains globally, including petrol, diesel, rear- and all-wheel drive.

Full engine details and specs – as well as the entire Australian pricing and spec details – are still to be confirmed. The car will arrive on sale locally in the fourth quarter of 2020.

The facelifted Mercedes E-Class model range will be completed by a Coupe model and Cabriolet variant in the coming months. The current-generation E-Class has been on sale in Australia since 2017.