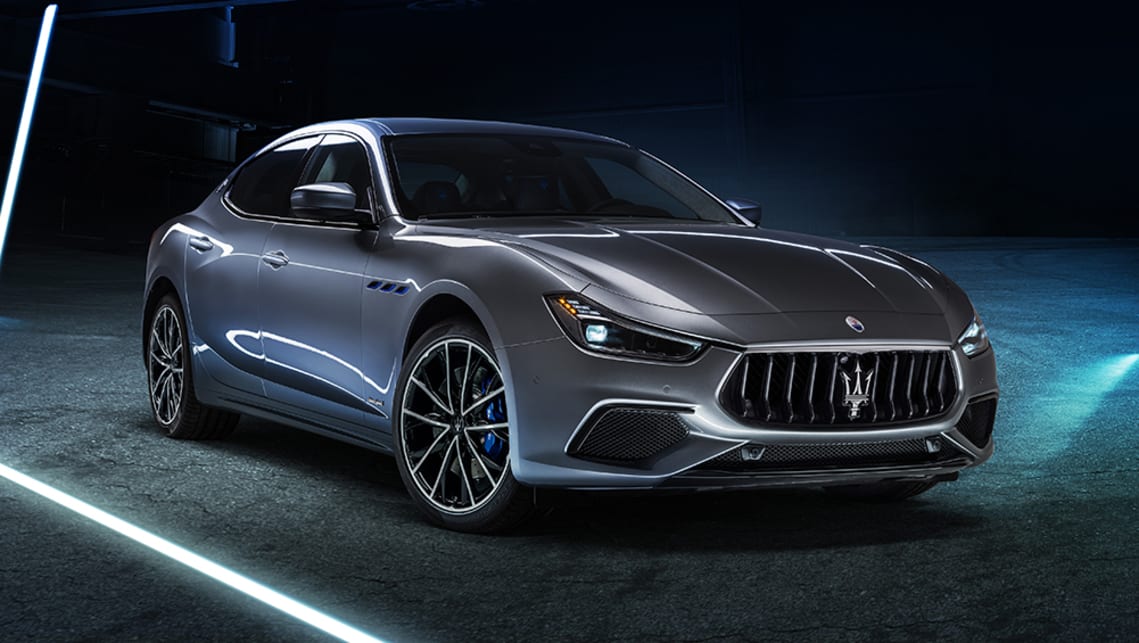 Maserati has revealed its first electrified model, the Ghibli Hybrid large sedan, which is partly powered by a four-cylinder engine.

The 2.0-litre turbo-petrol unit is mated to a 48V mild-hybrid system, which features a boot-mounted battery, a DC/DC converter, a Belt-driven Starter Generator (BSG) and an electric supercharger (eBooster).

The latter primarily provides a power boost at low engine speeds, but also steps up at the redline when the Sport drive mode is activated. Either way, this combination’s peak power is 246kW at 5750rpm, while maximum torque is 450Nm at 4000rpm.

Sending drive exclusively to the rear wheels via an eight-speed torque-converter automatic transmission, the Ghibli Hybrid can sprint from a standstill to 100km/h in 5.7 seconds while on the way to its top speed of 255km/h.

That said, the whole point of the Ghibli Hybrid is efficiency, with fuel consumption on the combined-cycle test (WLTP) being 8.6 to 9.6 litres per 100 kilometres, while carbon dioxide (CO2) emissions are 192 to 216 grams per kilometre.

Compared to its V6-powered Diesel sibling, the Ghibli Hybrid is not only about 80kg lighter, at 1878kg, but is also quicker in a straight line while offering similarly efficiency.

According to Maserati, despite its obvious implications, the Ghibli Hybrid still produces the brand’s signature growl, with the exhaust system’s fluid dynamics tweaked and resonators added to ensure it stays true.

Picking the Hybrid out of the BMW 5 Series-rivalling Ghibli crowd is easy thanks to its unique dark blue trim, which features prominently inside and out.

Speaking of which, the Hybrid is the first version of the MY21 Ghibli, which introduces new bumpers and tail-lights as well as a redesigned gear selector and an optional wireless smartphone charger.

A 10.1-inch touchscreen powered by Maserati’s latest MIA multimedia system is also new, with it based on the emerging Android Automotive operating system.

As with other Ghibli models, GranSport and GranLusso variants of the Hybrid are available, but a Maserati Australia spokesperson told CarsGuide local specification – and therefore pricing – is yet to be finalised ahead of the new model’s expected launch early next year.