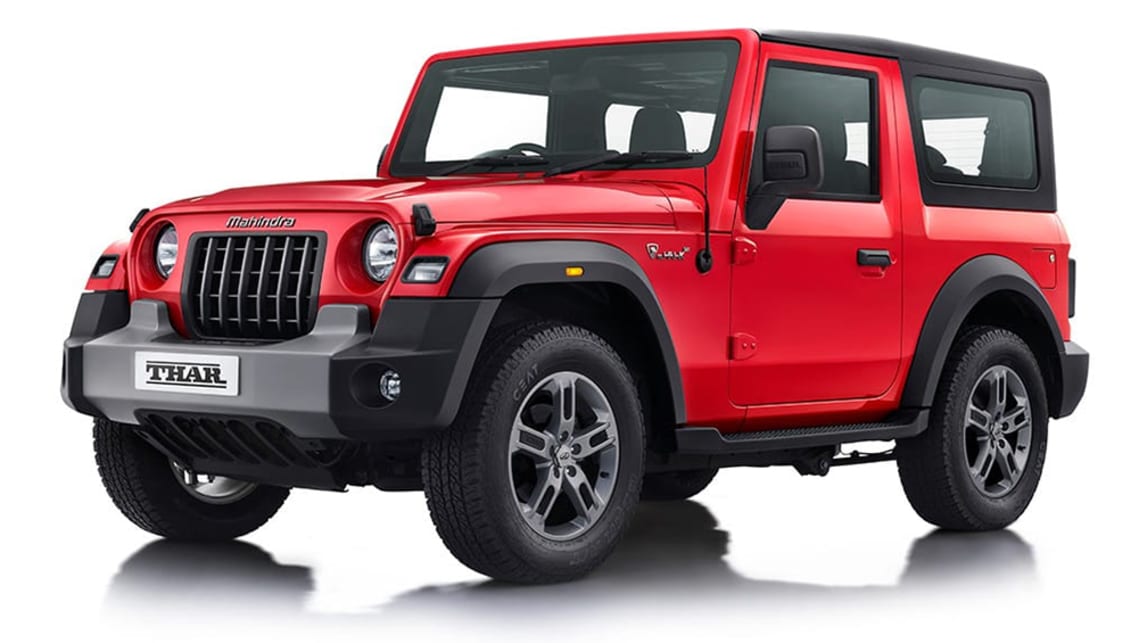 Mahindra has revealed the next-generation Thar light SUV, an off-roader that looks like the Jeep Wrangler but shapes up as a direct rival for the Suzuki Jimny.

True to its off-road roots and similar to the Suzuki, the new Thar has a ladder-frame chassis, although it does feature independent front and multi-link rear suspension.

Ground clearance is 226mm and wading depth is 650mm, while the Thar’s approach (41.8 degrees), departure (36.8 degrees) and breakover/ramp-over (27.0 degrees) angles are all claimed to be class-leading.

The Thar has two turbocharged four-cylinder engine options: a 112kW/320Nm 2.0-litre petrol and a 97kW/320Nm 2.2-litre diesel, which actually help it outmuscle the Jimny.

Both units are mated to either a six-speed manual or a six-speed torque-converter automatic with a part-time four-wheel-drive system, a two-speed transfer case and a rear differential lock.

Styling-wise, the Thar is almost a carbon-copy of the Wrangler, but this is deliberate due to Mahindra’s history with building the Willys Jeep in India in the 1940s – a license it still possesses, even though Fiat Chrysler Automobiles (FCA) now owns the Jeep brand.

The Thar is exclusively available as a two-door but has three roof options (hardtop and convertible or fixed soft-top) and two seating configurations (four forward-facing or two forward-facing and four side-facing).

Inside, a 7.0-inch multimedia system, Apple CarPlay and Android Auto support, a multifunction display and roof-mounted speakers lead the technology highlights for the Thar, which has a black cabin with silver accents and faux carbon-fibre trim on its centre console.

The current-generation Thar was considered for Australia but did not meet local safety regulations, with its side doors unable to withstand significant impacts.

As promised by Mahinda Australia in March 2018, that’s not the case with the next-generation Thar, which will therefore be sold in more markets than its predecessor, including locally from the first half of next year.