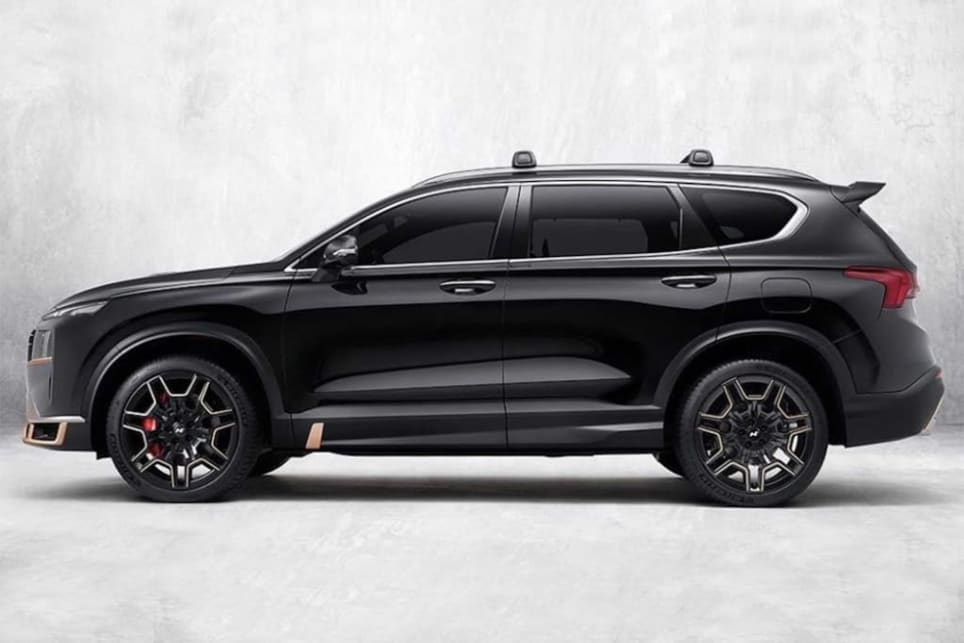 Hyundai was a late-comer to the performance car party, but it appears poised for a rapid expansion of its range of N-badged models. That includes the possibility of its family-friendly Santa Fe SUV getting the N Performance treatment.

The company has unveiled this Santa Fe N Performance concept car in South Korea, previewing a range of parts for the domestic market but also opening the door for a full-blown production-spec Santa Fe N in future.

This “Customising Show Car” (as it was officially, but awkwardly, dubbed) isn’t just a body kit and some new alloy wheels. It actually features a range of N Performance parts, including upgraded dampers, springs, brake calipers as well as a new body kit and 21-inch alloys with carbon fibre caps. Inside there are more upgrades with N sports seats finished in quilted Alcantara.

Under the bonnet there’s a new 2.5-litre four-cylinder turbocharged petrol engine good for a claimed 216kW of power and 418Nm of torque.

A Hyundai Australia spokesman not only left the door open for a Santa Fe N, but N variants of all models, saying: “The Santa Fe N Performance parts are not yet available to the public, if they were to go into production we would be very keen to bring them to Australia. In fact, we would be aiming to get a full range of N Performance upgrades for all models.”

That follows confirmation that the brand will begin expanding its N range before the end of 2020. The all-new i20 N will arrive in the fourth quarter along with the i30 sedan N Line and Sonata N Line.

Next year will see the long-awaited arrival of the updated i30 N hatch with the brand’s new dual-clutch transmission with plans for at least two more N models. One of those new models will either be the updated i30 Fastback N or possibly an N version of the i30 Sedan.

But the bigger news will be the arrival of the new Kona N, the brand’s first SUV N model, that could open the floodgates for hi-po, high-riders for the brand. Recently we reported that a Tucson N is likely to be added as part of the new-generation range.