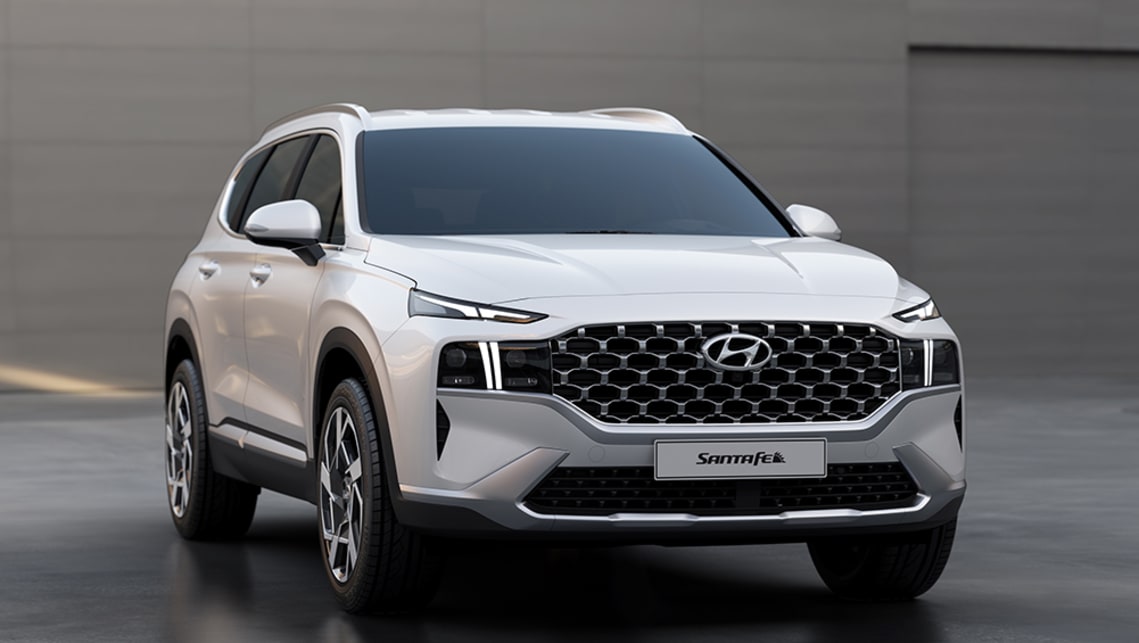 Hyundai has revealed a significant facelift for the fourth-generation Santa Fe large SUV, which is due in Australian showrooms in the second half of this year.

While Hyundai has so far stopped short of confirming the news, the facelifted Santa Fe is rumoured to use to a new platform, which enables electrification. That said, engine and transmission details are yet to be announced.

What we do know, though, is “the new Santa Fe’s redesigned interior now provides more space, comfort and convenience compared to the previous model”. Needless to say, the operative word there is ‘space’, with it adding fuel to the new-platform fire.

Either way, the latest Santa Fe looks much bolder than its predecessor, which was bold in itself. Up front, it continues to split its daytime running lights (DRLs) from its headlights, although the former are now integrated into the shorter, wider ‘cascading’ grille.

In fact, the fresh design is punctuated by a split ‘T’ signature, while the bumper has a larger air intake than before. Aside from body-colour cladding, the Santa Fe looks the same at its side, but its dimensions are likely to have changed if it’s switched platforms.

At the rear, the Santa Fe has a redesigned bumper that’s finished in body colour and has a full-width reflector. This theme is mimicked by the fresh tail-lights, which are connected by a thin light bar. And yes, the split ‘T’ signature is found there, too, albeit on its side.

Inside, the Santa Fe has a new centre stack and console that replaces the gear selector with a shift-by-wire set-up, similar to that of the Nexo and Kona Electric SUVs. The dashboard is now topped by a 10.25-inch touchscreen running Hyundai’s latest multimedia system.

Of note, Hyundai has put time and effort into making the Santa Fe feel more premium, “with every component finished in premium soft-touch materials”, according to the brand.

Time will tell if Hyundai has used the facelift to improve the Santa Fe’s safety, with airbags that fully cover the third row high up on the wishlist for families.

Hyundai Australia says more information, including pricing and full specification, will be released closer to the Kia Sorento rival’s launch.