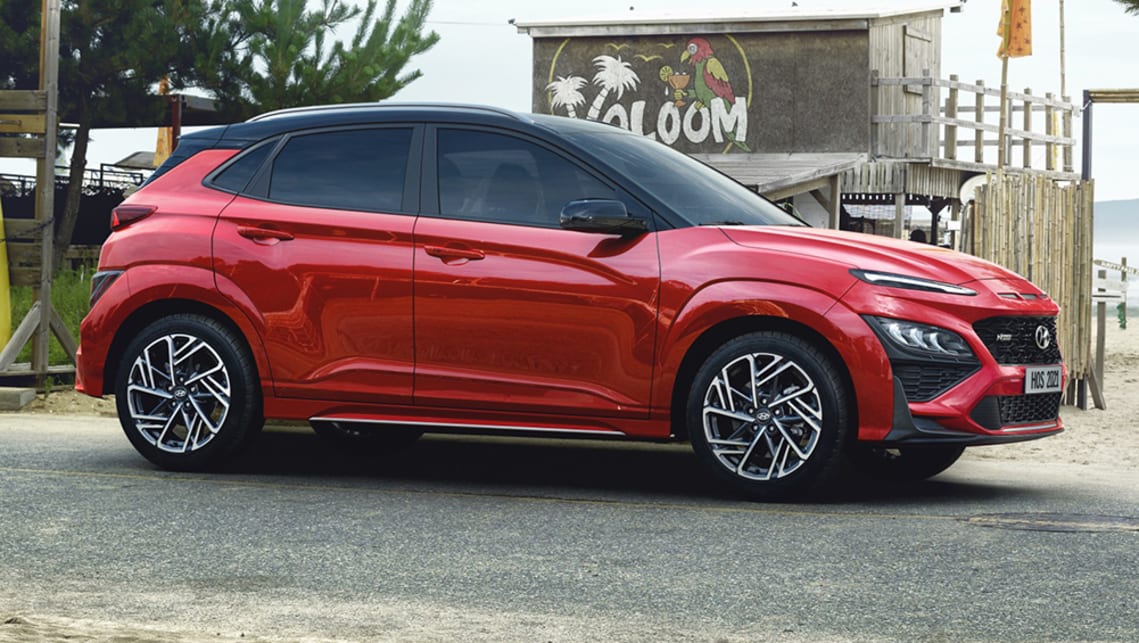 Hyundai has ripped the covers off its new Kona small SUV, revealing the top-spec-for-now N-Line variant and refreshed styling across the line-up that will land in Australian showrooms in the first quarter of 2021.

At the front, the new Kona wears a new grille, bumper with prominent skid plate and foglights, which combine to emphasis the crossover’s width.

From the rear, fresh tail-lights and a new bumper are fitted, while 17- and 18-inch wheel designs are new for 2021.

Of note, the 16-inch wheels found on the base grades, as well as the 17- and 18-inch wheels of the Kona Electric carryover from before.

The N-Line variant however, ditches the front bash plate in favour of a sportier bumper complete with extra air intakes and lower-chin splitter.

Hyundai is yet to fully detail engines available on the new N-Line, but “at the top of the line-up” is a 1.6-litre turbo-petrol engine outputting 145kW. No torque figures have been revealed.

This engine is paired to a seven-speed dual-clutch automatic transmission (DCT) and sends drive to the front or all wheels.

The former is paired with a six-speed automatic transmission, while the latter scores a seven-speed DCT.

Debuting with the Kona refresh is 48-volt mild-hybrid technology that is available to the 1.6-litre turbo-diesel and 88kW 1.0-litre petrol versions, neither of which are currently available in Australia.

Though just a facelift, the Kona is now 40mm longer than before, affording more cargo capacity and rear-seat legroom.

Inside the Kona is a reworked dashboard with a streamlined centre console area featuring an electric handbrake.

Drivers are treated to a 10.25-inch digital instrument cluster, while the multimedia screen can also be had with a 10.25-inch touchscreen display.

Hyundai is also touting a “higher level of quality and refinement”, as well as new ambient lighting features that will illuminate the front footwells and cupholders.

New in-cabin finishes are also available, with leather seats offered in black, beige or khaki – the latter two new to the 2021 update.

New however, is an e-call function that will automatically alert emergency services if the airbags have been deployed and the button is pushed.

Five new colours are available on the 2021 Kona, including ‘Surfy Blue’, ‘Dive in Jeju’, ‘Ignite Flame’, ‘Cyber Grey’ and ‘Misty Jungle’, which are added to the existing five hues. Each colour can also be optioned with a black two-tone roof and mirror cars.

However, specs have yet to be confirmed for Australian-market Konas, which – along with pricing –will be announced by Hyundai at a later date.

For reference, the current Kona line-up kicks off at $24,300 before on-road costs for the Go 2WD, and tops out at $65,290 for the Electric Highlander.