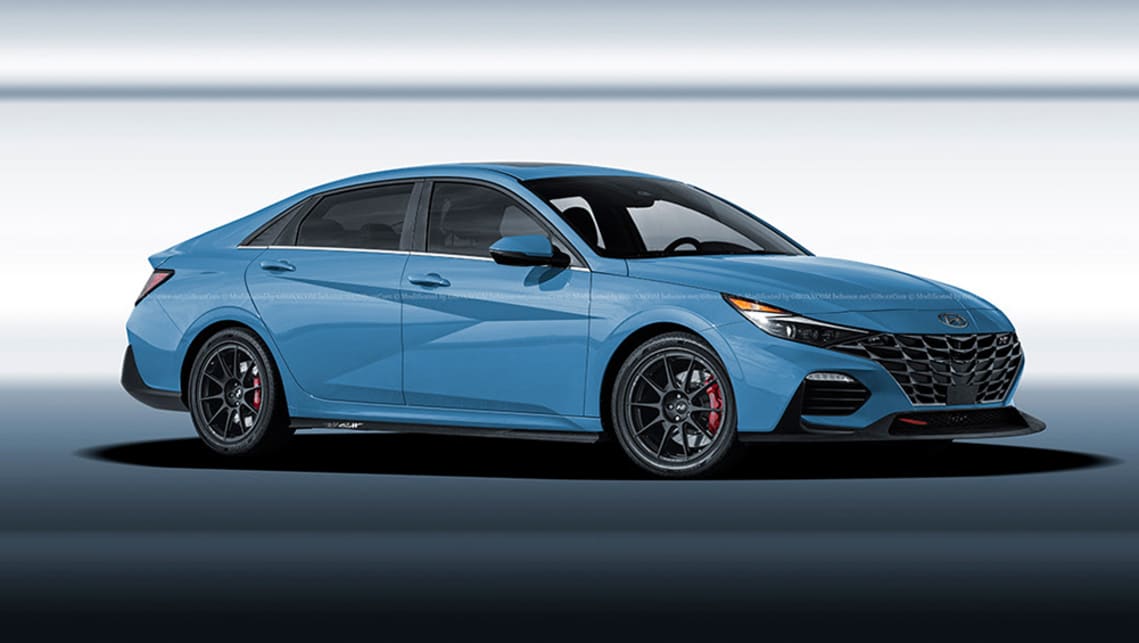 Hyundai’s new i30 sedan, formerly known as the Elantra, has been imagined in high-performance N trim.

Penned by Russian designer Aksyonov Nikita, these renderings add a number of details to the upcoming model like large multi-spoke wheels, low-profile tyres, lowered suspension and an aggressive body kit.

While a go-fast variant has yet to be confirmed for the i30 sedan, Hyundai is planning to expand its performance N range to cement itself in the sportscar market.

Hyundai’s N division released its pivotal i30 N hatch in 2017, and followed with the Fastback version a year later. It has also developed a Veloster N, i20 N light car and Kona N small SUV, with the latter two expected to launch locally.

Big wheels and a lowered ride height give the i30 sedan an edgy stance.

The i30 N sedan, as pictured here, could draw power from the 202kW/353Nm 2.0-litre turbocharged four-cylinder engine used in the current i30 N line-up.

That could be matched with a six-speed manual gearbox or to the eight-speed dual-clutch automatic transmission that Hyundai is currently developing.

Alternatively, the i30 N sedan could be positioned as a softer offering and use the 1.6-litre turbocharged four-cylinder engine found in the Hyundai Veloster Turbo.

Of course, the performance sedan would also feature beefier brakes and stiffer suspension, and likely be offered with adaptive dampers and a limited-slip differential to better handle the added grunt.

The standard version of Hyundai’s next-generation i30 sedan boasts a sharp new exterior, with a more steeply raked roofline for a “dramatic four-door coupe look”.

When it launches in the second half of this year, the car will be offered with both a naturally aspirated 2.0-litre petrol engine as well as a 1.6-litre hybrid powertrain.

While it is only speculation that Hyundai will bring out a hi-po N variant of the upcoming i30 sedan, it is expected to release an N Line grade which will add similar aesthetic upgrades like a body kit, unique wheels and other sporty touches.