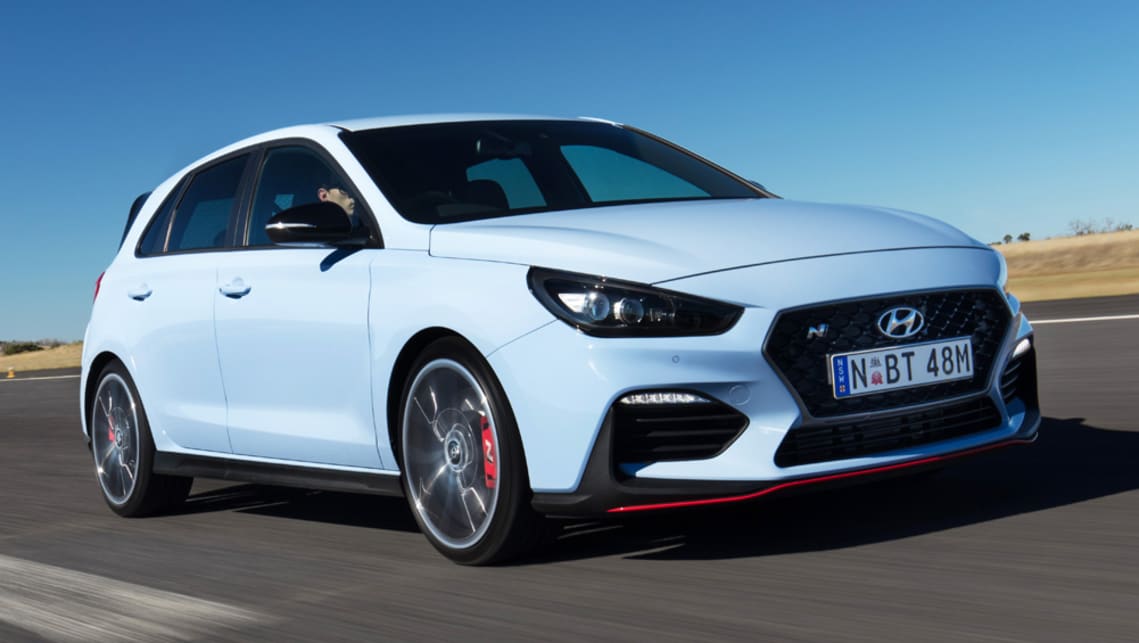 New Hyundai i30 N 2021: What we know so far about the updated VW Golf GTI rival

It’s safe to say the Hyundai i30 N has been a surprise hit.

For a first-time effort, the South Korean company has caused a stir in the hot hatch market few expected. It has won critical praise, awards and buyers with its combination of performance and value.

But the current i30 range is rapidly approaching automotive middle age, having first hit Australian roads in 2017. So a mid-life update is due in 2020 and that means a refreshed i30 N is likely to follow in 2021.

Here’s what we expect the updated model to offer when it does arrive.

Expect a reshaped front bumper to complete a new-look front end for the 2021 i30 N.

Spy shots of the 2021 i30 have been popping up from Europe during the year as testing ramps up. The clearest images to date suggest a range of minor tweaks to the styling, in keeping with a typical mid-cycle upgrade.

There appears to be a new grille treatment, with bolder horizontal bars intersected by angular accents. While it’s unclear based on any images seen so far, it’s likely to expect a reshaped front bumper to complete the new-look front end.

At the rear there are new LED taillights as well as what appear to be larger exhaust tips.

The news all hot hatch fans love to hear – more power is on the way. Hyundai Australia’s recent entry into the World Time Attack wasn’t simply a marketing stunt. The company worked directly with engineers in Korea to test a new prototype turbocharger and intercooler on the i30 Fastback N that hot lapped Sydney Motorsport Park. So expect that new package (or something very similar) to feature on the 2021 i30 N. Hyundai never revealed any details of how much extra power the Time Attack entry produced but don’t be surprised if the 2021 model is punching out more than 220kW.

Currently, the i30 N is only available with a six-speed manual.

Hyundai has said since day one it will offer a two-pedal option for the i30 N, due to the overwhelming preference for automatics by local buyers. An eight-speed wet dual-clutch has been in development for years to fill that need but has been delayed multiple times.

It’s expected to debut on the 2021 model now, so it will appeal to more buyers while also offer faster shifts and a wider spread of ratios to extract the best from the new engine.

Whether the front-wheel drive layout will be retained for an entry-level i30 N is unclear at this stage.

Another open secret from the brand for a while now is the possibility of an all-wheel drive i30 N to directly tackle the Volkswagen Golf R.

The i30 N sits on the same ‘PD’ platform as the Kona SUV, which features an all-wheel drive system, so the mechanical elements are already in place. In fact, Hyundai’s N division has already built a Kona N prototype, according to development boss Albert Biermann.

He told CarsGuide at the recent Frankfurt Motor Show that the next N model would be “sitting a little bit higher” a clear pointer to the Kona.

Whether the front-wheel drive layout will be retained for an entry-level i30 N is unclear at this stage, but it seems plausible that the company would expand its performance offerings by having both in the range.

There was some disappointment when the limited edition i30 N Project C missed the cut for Australia when it was unveiled in September. It featured a range of newly developed option parts for the i30 N, including a carbon fibre bonnet, lightweight O.Z. Racing alloy wheels and sports seats.

Securing access to those parts in some way remains on the agenda for Hyundai Australia. Local product planning chief, Andrew Tuitahi, said they could be utilised for special editions or the updated model.

“I think we’ll see some of those parts come to Australia as special editions or some limited runs, maybe,” Tuitahi told CarsGuide in September.. “Or we’ll even see some of those things at product enhancements and when new models come out they’ll be parts for those cars.”