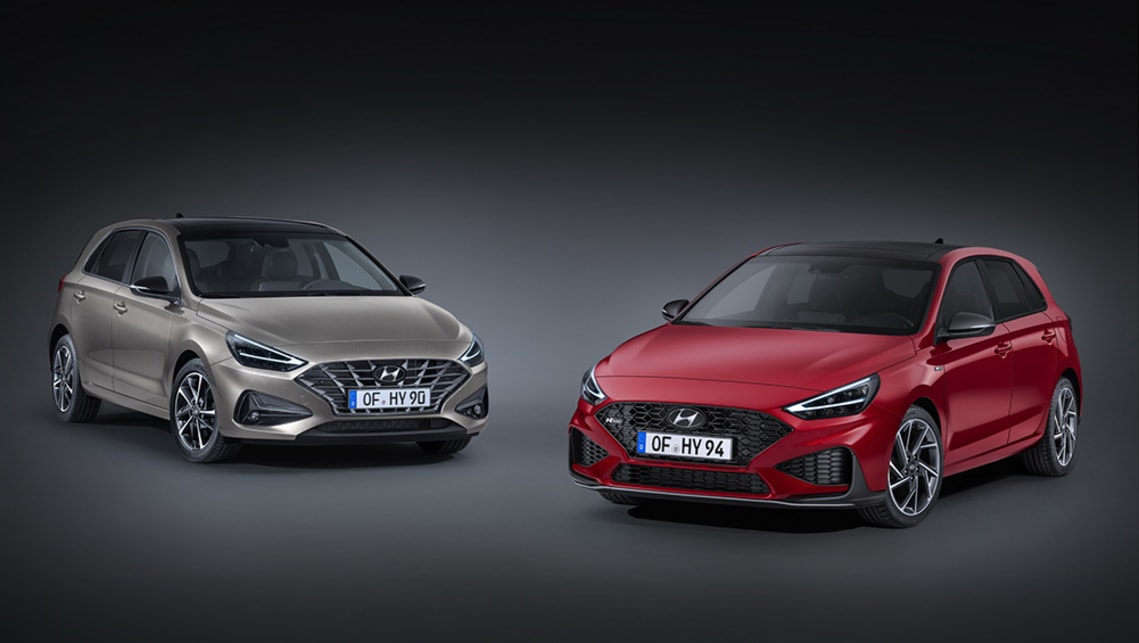 Hyundai has revealed the mid-life facelift of the third-generation i30 small car, which is due in Australian showrooms in the second half of this year.

The exterior changes are predictable, with the i30’s headlights and tail-lights inheriting new arrow-shaped LED signatures. In the former, this new design element actually encompasses the daytime running lights.

The ‘cascading’ grille is wider and more angular than before, and features a flashy new insert in regular variants, while the sporty N-Line grade gets a customary mesh item.

Both regular and N-Line versions get their own new bumpers front and rear, with the latter incorporating a more aggressive diffuser.

Fresh sets of alloy wheels ranging from 16 to 18 inches in diameter round out the external changes alongside three new paintwork options (Dark Night, Silky Bronze and Sunset Red).

The i30’s tail-lights now have an arrow-shaped LED signature.

Inside, the i30 adopts a 10.25-inch touchscreen multimedia system and a 7.0-inch multi-function display, the former of which supports wireless smartphone mirroring.

The Mazda3 rival’s suite of advanced driver-assist systems has expanded to include rear autonomous emergency braking and steering assist, among others.

However, the big news is addition of a 48V mild-hybrid system to overseas engine line-up, which sees only the 100kW 1.6-litre turbo-diesel four-cylinder unit carry over, albeit with electrification.

An 88kW 1.0-litre turbo-petrol three-cylinder engine is now available overseas, mated to either a six-speed manual or a seven-speed dual-clutch automatic, while its 117kW 1.5-litre four-cylinder counterpart is also new and comes with the same transmission options.

Whether or not these mild-hybrid powertrains make it to Australia remains to be seen, with Hyundai keeping market specifics close to its proverbial chest so far.

Australian pricing and specification will be announced closer to the i30’s launch. For reference, the current regular line-up ranges in price from $19,990 to $35,490 plus on-road costs.

As reported, a facelifted i30 N hatch and Fastback sedan will be revealed at a later date and are expected to go on sale locally early next year. They will be headlined by a new eight-speed dual-clutch automatic option.