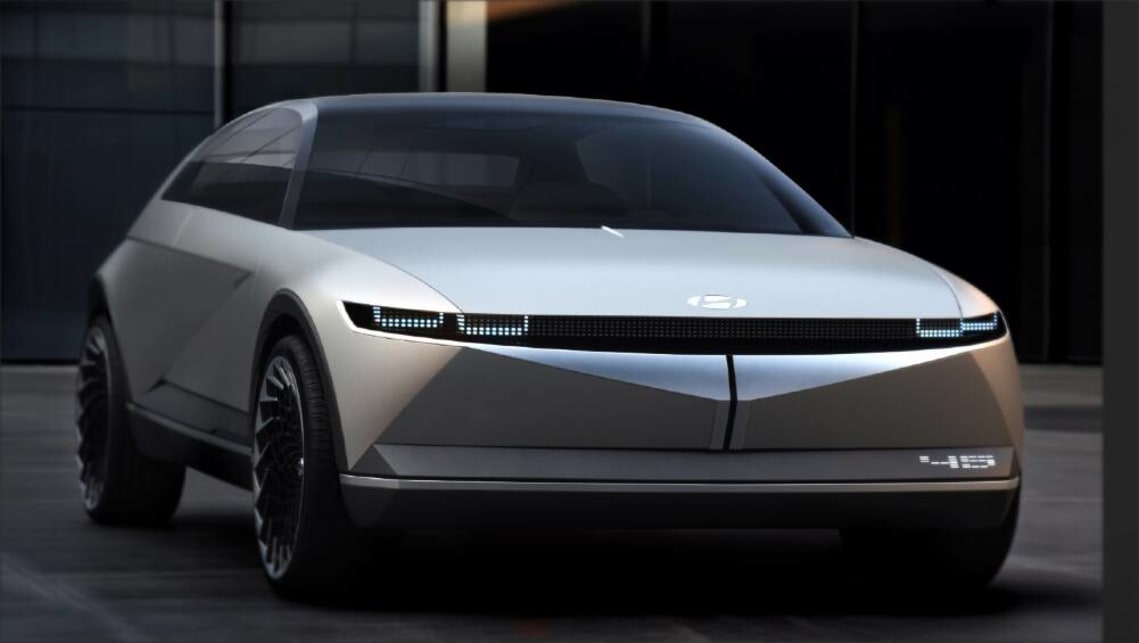 New Hyundai 45 2021: Everything we know about the Tesla Model Y rival

Some concept cars are worth paying more attention to than others. Case in point is the Hyundai 45.

While it might have looked like the Hyundai 45, that wowed the crowds at the 2019 Frankfurt Motor Show, was too radical for the South Korean brand, new spy photos from Germany this week have all-but-confirmed it will be headed to a showroom in the near future.

Officially Hyundai hasn’t guaranteed the car will make production, with the company’s spokesman explaining that several factors including government regulations, component supplies and manufacturing issues will all factor into the final decision to greenlight the 45.

“At the moment, the product plan for the all new battery electric vehicle from Hyundai Motor Company, reported to be confirmed in some subject media coverage, is not fully established and impacted by aforementioned factors,” the spokesman said.

But while Hyundai won’t confirm production the close-to-production look of the prototype spotted testing suggestions the company is well down the path of adding it to the range. In fact, reports from South Korean indicate a factory has been chosen ahead of its official launch in 2021.

Named to honour the 45th anniversary of the Pony Coupe Concept, as well as the 45-degree angles used to create its shapes, Hyundai’s design chief SangYup Lee called it the evolution of its ‘Sensuous Sportiness’ design language.

The production-ready test mule spotted at Germany’s Nurburgring this week retains the same angular look as the concept, albeit less-extreme. It features a squared-off bonnet, short overhangs front and rear and tapered rear hatch. It’s even riding on very similar wheels as the concept car, suggesting the company is trying to stay as true to the original as possible.

The 45, or whatever name it carries into production, won’t just showcase the brand’s latest design, it will also sit on its newest electric vehicle technology. Hyundai’s Electric-Global Modular Platform (E-GMP) will underpin the production car, as we reportedly recently.

The E-GMP is being developed by Hyundai and sister-brand Kia to power the next-generation of battery-powered vehicles for the range. Hyundai has also confirmed the same underpinnings will be used for a production version of the Prophecy concept that was meant to be unveiled at the cancelled 2020 Geneva Motor Show.

According to comments from Lee to Auto Express earlier this year, the E-GMP is a compact skateboard-style platform, with the batteries packaged on the floor between the axles, which allows for flexible body design – hence why it can be used for the boxy 45 and swooping Prophecy.

Few technical details have emerged about the E-GMP but some reports have suggested it will have up to 480km of range in the top-spec models.

As a nod to its self-driving capabilities, the 45’s interior can be configured like a household lounge room.

While the exterior design looks similar to the Frankfurt concept, the cabin will be a major change. That’s because the concept was also showcasing the brand’s autonomous technology so offered a minimalist design and some radical touches. For example, don’t expect the production car to feature the swivelling front seats of the concept that turned the cabin into a lounge room.

The 45 could still feature elements of Hyundai’s latest autonomous technology, previously available on the Genesis models and Nexo fuel-cell vehicle, in a bid to make it more mainstream.

The prototype retains the compact crossover dimensions of the concept, splitting the difference between a traditional low-slung passenger car and a high-riding SUV. That should position it above the Kona Electric in the Hyundai line-up, similar in size to the upcoming new Tucson.

That size will also pit it against electric SUVs such as the Tesla Model Y and Ford Mustang Mach-E that are both on the way in the near future as brands ramp up EV options this decade.

Hyundai has been trying to position itself as a leader in alternative fuels, launching the Ioniq range of hybrids and EV, the Kona Electric and offering the Nexo hydrogen fuel cell to interested fleets.