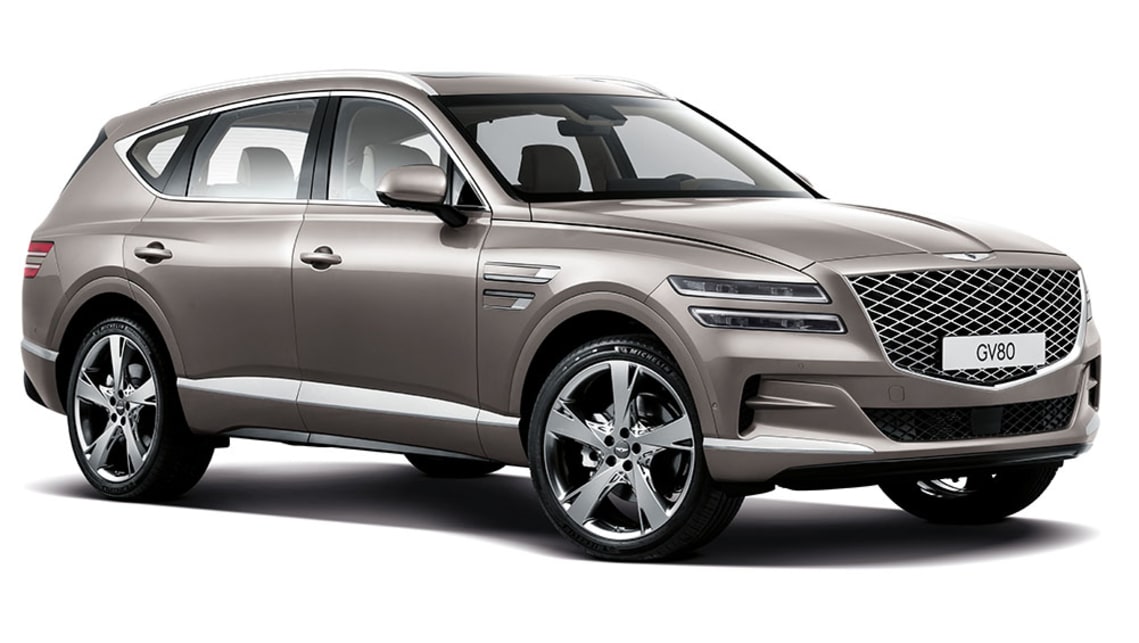 The Genesis GV80 2020 model has been unveiled in Korea ahead of its Australian debut mid-way through 2020.

As the first SUV from the Korean luxury brand, the all-new Genesis GV80 luxury high-rider is the company’s answer to cars like the BMW X5, Mercedes GLE and Lexus RX, and is arguably the model the company needs to succeed in markets like Australia, with just 103 Genesis models (G70 and G80 sedans) sold in 2019.

The company plans to offer a range of engines for the strikingly styled SUV when it launches locally, including a 2.5-litre four-cylinder turbo-petrol (believed to produce 226kW of power), a 3.5-litre twin-turbo V6 petrol (with 283kW/589Nm), and a 3.0-litre in-line turbo-diesel six-cylinder (205kW/588Nm). The only fuel use details currently available are for the diesel, which is said to use about 8.4 litres per 100 kilometres.

The model is based on the Genesis’ all-new Rear Wheel Drive platform, which will also underpin the new-generation G80 luxury sedan, which is also due this year. According to the company, there’s a focus on lightweight chassis components as part of this newly developed architecture.

The platform will allow Genesis to offer customers the choice of rear- or all-wheel drive, and as always, the brand’s parent company Hyundai’s local team has been working for months on making sure the Australian suspension and steering tuning suits local tastes.

The job won’t be as easy as usual, though, with the GV80 coming equipped with a camera-based suspension control technology that can watch the road ahead and adapt the dampers to suit potholes or speedhumps. Similar tech is deployed in high-end Mercedes-Benz models.

The GV80 AWD models will have Multi-Terrain Control, with sand, mud and snow modes available – those modes adjust throttle, transmission calibration and the reactiveness of the electronically controlled limited slip differential at the rear axle.

The design may seem a departure from the existing Genesis models in the range, but there are plenty of cues borrowed from the G90 upper-large sedan which isn’t sold in right-hand drive markets.

The distinctive twin-light headlamps and tail-lights are a bit part of that resemblance, along with the bold grille treatment.

There will be the choice of five- or seven-seat layouts for the Genesis GV80 models sold in Australia, pitching it as a clear competitor to those aforementioned luxury SUVs. However, Genesis Australia has stated it is “too soon to be discussing pricing and model line-up in more detail at this time”, and that “more will be revealed closer to the Australian launch”.

The interior features an “oasis-like” environment, with high-tech elements such as Road-Noise Active Noise Control (RANC) that works to cancel out road noise, much like headphones that do the same thing.

Inisde, the media system has the option of touch screen capability or the Genesis Integrated Controller with handwriting recognition.

The cabin has a broad look to it, and the dash is adorned with a 14.5-inch split-screen multimedia system. According to Genesis, the “number of hard buttons and switches was intentionally kept to a minimum”, while “soft materials cover every surface, from the inside of the door handles to the quilted knee pads that line the lower sides of the console”.

There’s a dial-style shifter for the shift-by-wire transmission, while the media system has the option of touch screen capability or the Genesis Integrated Controller with handwriting recognition. Further, the navigation system can be had with an augmented reality suite, whereby a camera at the front of the car overlays the sat nav directions with real-world vision and instructions.

The company is pushing the GV80 as a safety leader, too, with a new smart cruise control system with machine learning – an AI-based system that can learn the behaviour of the driver and implement a level of autonomous driving when appropriate.

The GV80 also has 10 airbags fitted, including a front-centre airbag that deploys between the front occupants in the event of an accident. That tech is required for a 2020 NCAP / ANCAP crash test rating, which is expected for the GV80.

Genesis will offer the GV80 with the choice of 11 exterior colour options and five interior trim hues.

Stay tuned for more on the Genesis GV80 SUV in the coming months, and our global first drive review due very soon.