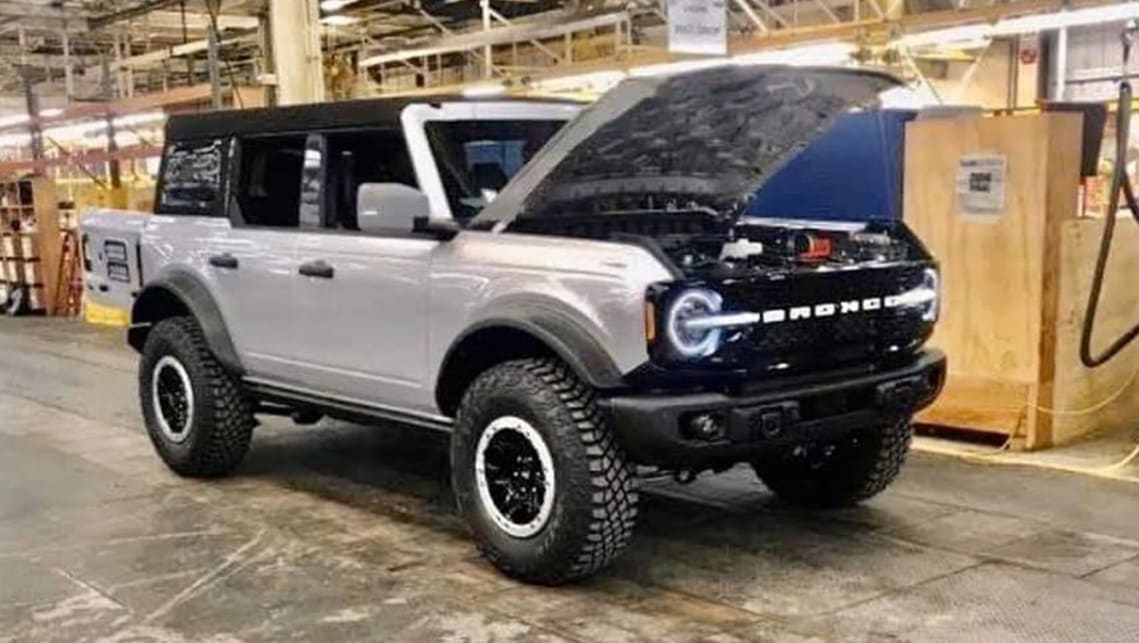 Images of the reborn Ford Bronco and its baby sibling have seemingly been leaked ahead of their official reveal in the near future.

Posted on FullSizeBronco, both of the alleged Bronco images show a rugged off-roader based on the Australian-developed T6 platform, which underpins the current Ranger ute and Everest SUV.

One image depicts the front three-quarter angle of a four-door Bronco with a removable soft-top. It has circular LED daytime running lights, a rectangular grille, prominent fender flares and chunky off-road tyres.

The other image shows the side profile of a two-door Bronco with a fixed roof, or at least a full-scale model of one. Either way, it appears to feature the same design elements, although its vertical tail-lights can be glimpsed.

While the Bronco rides on a ladder-frame chassis, its aforementioned baby sibling instead uses the Escape SUV’s monocoque platform and is therefore intended to take on the Jeep Compass.

Is this a pre-production vehicle or a full-scale model? We’ll let you decide.

Consistent with previous dealer leak, the images of this spin-off model posted on Bronco Sport Forum suggest it be called Bronco Sport. The similarities between it and the Bronco are unsurprisingly strong, with near-identical headlight and grille designs used.

Thanks to the trio of alleged images, it appears the Bronco Sport will come fitted with vertical tail-lights with B-shaped brake lights, and a sculpted tailgate with centralised model-specific lettering and an offset Ford badge.

As reported, Australian buyers hoping to take delivery of a Jeep Wrangler-rivalling Bronco are out of luck, as Ford has ruled it out locally, although the door hasn’t been shut on the Bronco Sport.

Ford is expected to officially reveal the Bronco and its Sport counterpart next month, ahead of North American sales beginning later this year.