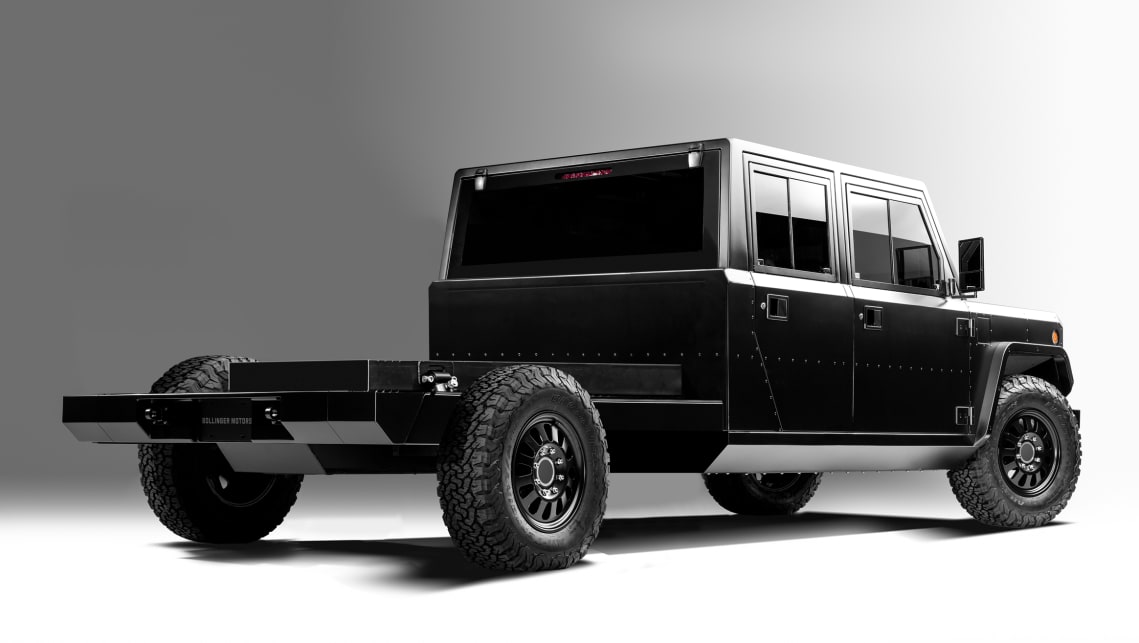 Bollinger, a US-market electric manufacturer which is working to “reinvent” the truck, has revealed a cab-chassis version of its B2 pick-up .

Electric or not, this cab-chassis has serious specs, with Bollinger claiming 458kW/906Nm outputs from its dual-motor set-up.

Bollinger claims the cab chassis is the ideal work vehicle as its massive 120kWh battery (good for a 322km range in the standard B2 dual cab unladen) can also be used to power work tools.

The truck drives all four wheels with low-range capability, and has hyrdo-pneumatic suspension and almost 2.3 tonnes of payload capacity. The brand claims it is “the world’s most capable” electric vehicle.

Bollinger has released a series of images imagining how the B2’s long tray could be equipped with diggers, cranes, workstations or even as a light-duty truck. The images also reveal a previously unseen single-cab variant.

The B2 single cab imagined with a crane attachment.

The B2’s large battery can be charged via a 10kW onboard charger for AC (10-hour charge time) or by a Type 2 CCS combo charger for DC charging for a 75-minute charge time.

Bollinger is set to enter the electric-vehicle market with its B1 off-road SUV and B2 dual-cab pick-up some time in 2021, although it will start the US market . The brand has stated in the past it has scope for an expansion, however, with a right-hand drive version in the works.

As reported, however, the brand might have trouble with Australian Design Rules (ADRs), as they require every passenger vehicle sold in Australia to have airbags. Neither Bollinger vehicle has such basic safety refinements.

Pricing is also yet to be announced, but we wouldn’t hold our breath for a budget offering given this truck’s equipment and specs.

Is this cab-chassis a more realistic proposition than the Cybertruck?

At least this truck’s dimensions are confirmed, with Tesla’s rival Cybertruck’s very design still in a state of flux.

That hasn’t stopped its charismatic boss, Elon Musk, from announcing that a higher-performance ‘Plaid’ variant of the Cybertruck will be available.