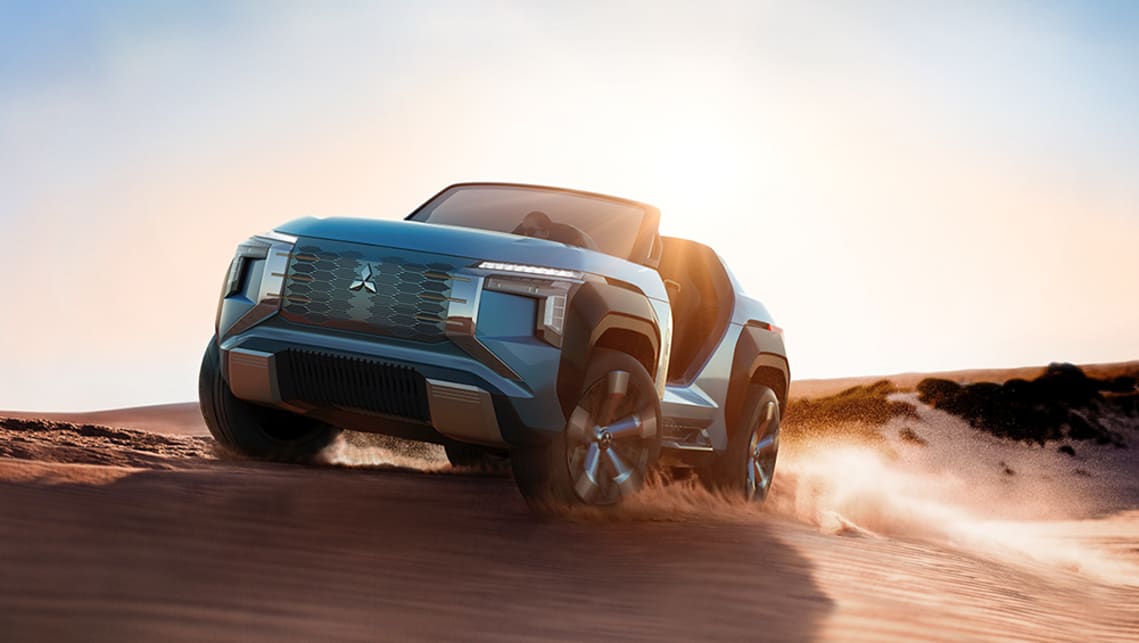 Mitsubishi wants to take on Jeep Wrangler with Mi-Tech concept

Mitsubishi has shocked the crowds at this year’s Tokyo motor show with the unveiling of the Mi-Tech Concept, a dune buggy-inspired small SUV motivated by a plug-in hybrid (PHEV) powertrain with a twist.

The Japanese carmaker says the Mi-Tech Concept “delivers unparalleled driving pleasure and confidence over all terrain in light and wind”, mainly thanks to its four-motor all-wheel-drive (AWD) system and lack of a roof and doors.

Instead of using a traditional internal-combustion engine in tandem with the electric motors to create a PHEV powertrain, the Mi-Tech Concept uses a range-extender-style gas turbine engine-generator that is lightweight and compact.

From the side, the Mi-Tech Concept is punctuated by its oversized fender flares and large-diameter tyres.

Critically, this set-up is also able to run on a variety of fuels, including diesel, kerosene and alcohol, with Mitsubishi claiming that “its exhaust is clean, so it responds to environmental and energy issues”.

The electric AWD system is enhanced by the Mi-Tech Concept’s brake-by-wire technology that allows for “high response, high accuracy control of drive and braking force of the four wheels while delivering a drastic improvement in turning and traction performance”.

For example, when two wheels are spinning out while off-road, this set-up can send the right amount of driving force to all four wheels, ultimately sending enough drive to the two wheels still on the ground so that progress does not remain disrupted.

Further powertrain and drivetrain details – including outputs, battery size, charge times and driving range – are being withheld by the marque that currently has the Outlander PHEV mid-size SUV as the only electrified model in its line-up.

The Mi-Tech Concept’s chunky exterior design is highlighted by the latest interpretation of Mitsubishi’s Dynamic Shield grille, which uses a satin-coloured plate in the middle, while six copper-coloured horizontal bars “accentuate its expressiveness as an electrified vehicle”.

The cabin adopts a horizontal theme that is emphasised by the copper lines found on the dashboard and steering wheel.

There are also T-shaped headlights and a skid plate up front, the latter of which is split into two. From the side, the Mi-Tech Concept is punctuated by its oversized fender flares and large-diameter tyres, while the rear end’s tail-lights are also shaped like Ts.

The cabin adopts a horizontal theme that is emphasised by the copper lines found on the dashboard and steering wheel, while the centre console only has six piano key-style buttons that are made easier to use thanks to the high placement of the front handgrip.

While a small digital instrument cluster is positioned in front of the driver, all relevant vehicle information, such as terrain recognition and optimal route guidance, is projected onto the windshield via augmented reality (AR) – even when visibility is poor.

The Mi-Tech Concept also comes equipped with Mi-Pilot, the brand’s next-generation suite of advanced driver-assist systems, with it operational on unpaved roads in addition to the usual highways and regular tarmac.