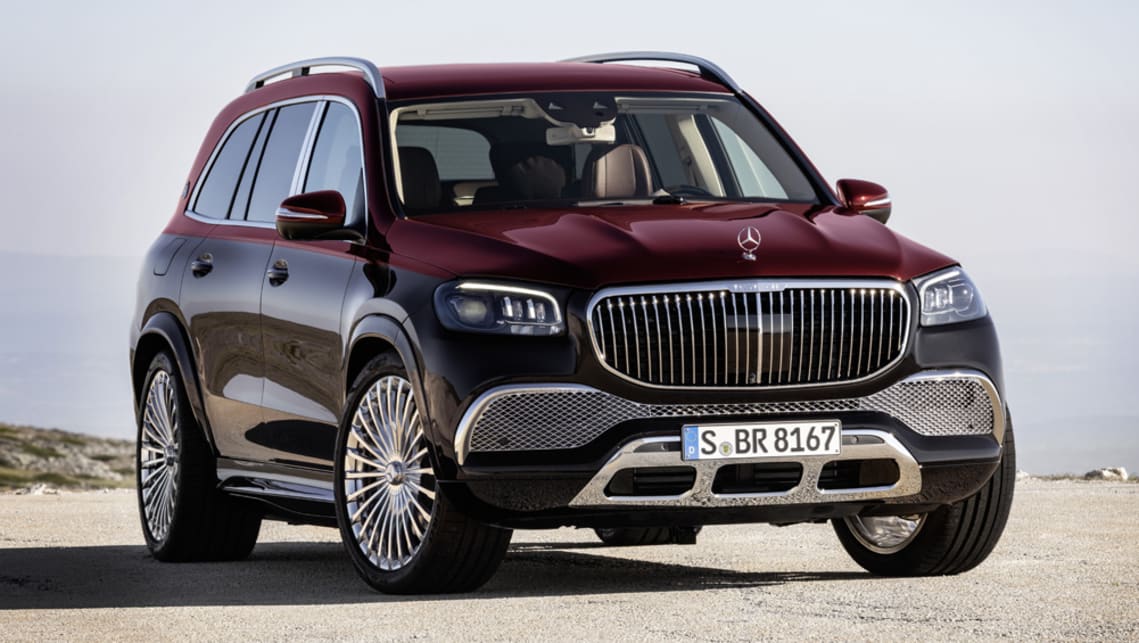 Mercedes has chosen to rip the covers off its first Maybach GLS 600 SUV in Guangzhou, China instead of a traditional motor show, a hint at where the new ultra-luxurious model is expected to sell best.

With the GLS large luxury SUV as a basis, the Maybach-badged model adds a number of ultra-opulent touches to elevate it to compete against the Rolls-Royce Cullinan and Bentley Bentayga.

Expected to land in Australian showrooms in the third quarter of next year, from the outside, the GLS 600 is easily distinguished due to its vertical-slat chrome front grille.

Window surrounds, side skirts, model-specific badging, exhaust outlets and bumper detailing are also finished in the high-sheen effect, while 22-inch wheels are fitted as standard, with 23-inch components available as an option.

With the GLS large luxury SUV as a basis, the Maybach-badged model adds a number of ultra-opulent touches.

The headline changes however, are all found inside the Maybach GLS 600 – more specifically in the second-row seats.

As standard, only four pews are fitted to maximise space, but a five-seat configuration can be added.

In four-seat form, the rear pews can be electronically height adjusted and recline up to 43 degrees, and work in conjunction with the window roller blinds to block out as much of the outside world as desired.

All touch points in the rear are finished in a fine nappa leather, with the choice of further customisation and cushioning available.

As standard, only four pews are fitted to maximise space, but a five-seat configuration can be added.

The seats, of course, are heated, cooled and massaging.

The centre console between the rear seats can be transformed into a table, while a refrigerator with space for champagne bottles and flues are also offered.

To keep unwanted in-cabin sound intrusions, active and passive noise cancellation tech is fitted throughout the interior, and Mercedes-Maybach developed a bespoke fragrance that can be piped through the air-conditioning system.

Rear occupants are treated to extra vents for the climate controls compared to the standard GLS, while the system has been amped up to heat/cool quicker.

Also tucked into the rear console is a Mercedes-Benz User Experience (MBUX) multimedia tablet controller, which can regulate all entertainment functions.

Air suspension is standard, with an E-Active Body Control option aims to further soak up bumps on undulations on the road.

Drivers also have access to a dedicated Maybach drive mode for the first time that maximises rear-seat comfort.

From the front seats, the new Maybach is nearly identical to the GLS donor car.

When the rear doors are open, the vehicle will automatically lower itself to make ingress and egress that much easier, while running boards will extend from the vehicle.

From the front seats, the new Maybach is nearly identical to the GLS donor car, save for the full-leather finishes and model-specific badging.

Though the Maybach adds a number of extra components, the removal of the third-row seats means it weighs about the same as the regular GLS.

Powered by a familiar 4.0-litre twin-turbocharged petrol V8 engine, the Maybach GLS 600 gains a unique tune of 410kW of power and 730Nm of torque that could be expanded to other 600-specific variants.

Paired to a 48-volt mild-hybrid system, fuel consumption is pegged between 11.7-12.0 litres per 100 kilometres.