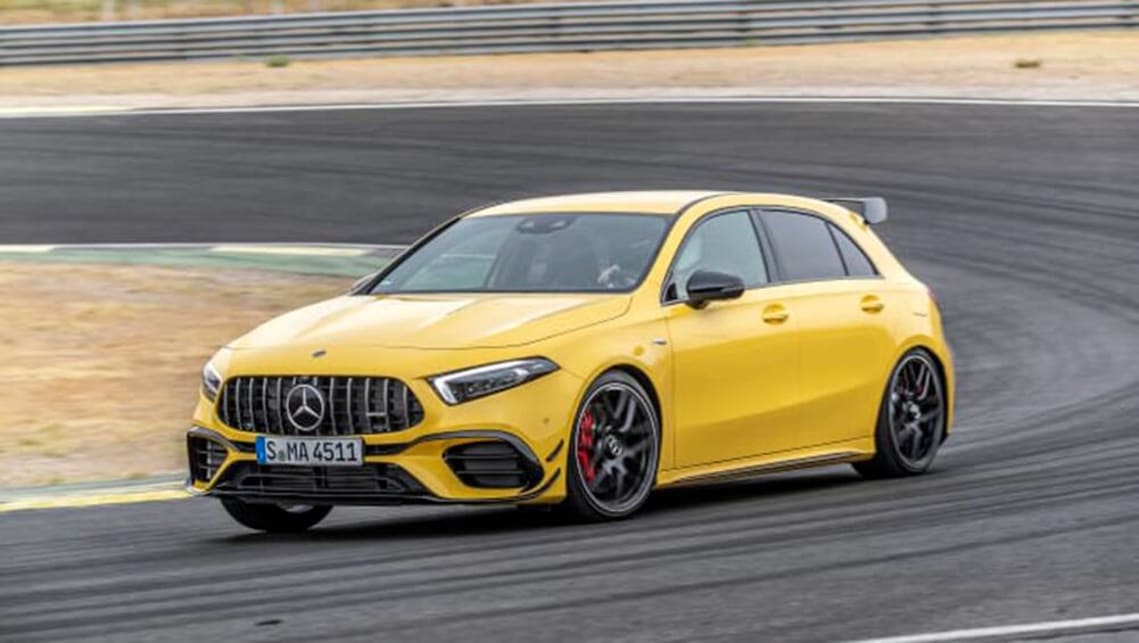 Mercedes-AMG A45 S 2020 vs the world: How does the new ‘sports car’ compare to the Audi RS3 and BMW M2 Competition?

Don’t make the mistake of calling the second-generation A45 a hot hatch, as Mercedes-AMG will be quick to point out it’s not one.

Instead, the new A45 is apparently a bona-fide sports car – something its predecessor allegedly was not.

Granted, it is hard to argue with the German high-performance brand when you consider how astounding the A45’s headline figures are, especially in flagship S form.

That said, before the A45 S arrives in Australia next month, let’s see how it compares to an old foe (read: another hot hatch) and a genuine sports car (read: a model with two doors).

Yep, this is a tasty comparison we can’t wait to see in the real world, but for now, let’s take a look at how the A45 S stacks up against the Audi RS3 and BMW M2 Competition on paper.

Let’s get straight to the point: the A45 S is motivated by the most potent series-production turbocharged four-cylinder engine in the world, with its 2.0-litre petrol unit pumping out 310kW of power at 6750rpm and 500Nm of torque from 5000-5250rpm.

If the latter seems a little off for a turbo-petrol engine, it’s because Mercedes-AMG did some ‘torque shaping’, which makes the output curve more or less mimic that of a naturally aspirated unit. Why? Old-school thrills, apparently.

And it’s mixed news for the M2 Competition and its 3.0-litre twin-turbo inline six-cylinder unit, which comes close in the power stakes (302kW at 7000rpm) but has a comfortable lead when talking the torque (550Nm from 2350-5200rpm).

Transmission-wise, the A45 S is mated to an eight-speed dual-clutch automatic, while both the RS3 and M2 Competition have one less gear to play with, although the latter does also come with the no-cost option of a purist-friendly six-speed manual.

The RS3 Sportback is the A45’s traditional rival.

Surprise, surprise; the A45 S is no slouch in a straight line. The sprint from a standstill to 100km/h takes just 3.9 seconds – a mark supercars were proud of less than a decade ago.

The RS3 isn’t that far behind, at 4.1s, while the M2 Competition is another tenth adrift. Why? Well, it’s the only rear-wheel-drive vehicle here, with the other two sending their outputs to all four wheels. Yep, traction is critical off the line – and every second counts.

Top speed is another area where the A45 S has bragging rights, with it electronically limited to 270km/h. The RS3 and M2 Competition are also handicapped ex-factory, but at a much lower 250km/h.

The M2 Competition is a sports car, but so too is the new A45, apparently.

The move from hot hatch to sports car has had an effect on the A45’s pricing. Okay, that’s understating it a wee bit, as the generational change means it’s $18,108 dearer than before, at $93,600 plus on-road costs.

Yep, buyers are compensated for the extra spend with a more comprehensive package, but the new A45 still stings the wallet a lot harder. Even if it is a generation older, the RS3 is still nearly $10,000 more affordable, at $83,800.

For a full specification breakdown for all three models, check out the related links scattered throughout this article.