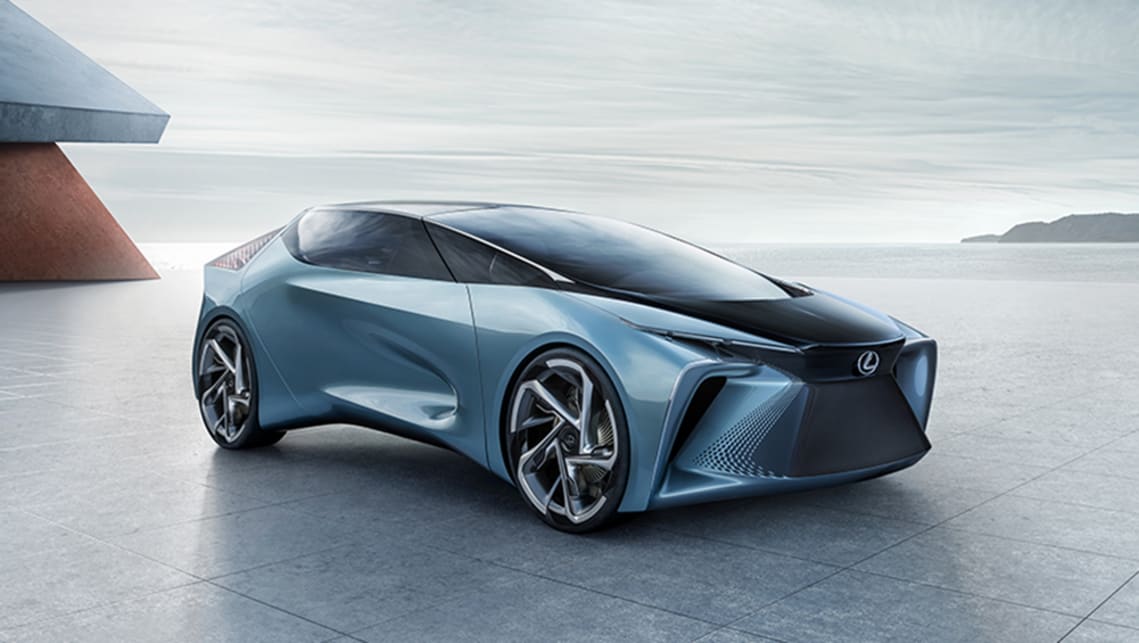 The Lexus LF-30 concept has been revealed at the 2019 Tokyo Motor Show as the brand’s first glimpse of its future dedicated electric car due in 2020.

The LF-30 concept takes what we’re familiar with from previous Lexus concept models – extreme styling, a bold “wing-shaped” headlight signature and an even bolder grille – but this time around the brand has gone even further, with a striking new electric model that bears a name reflecting the future (LF denotes Lexus Future) and its past (30 is to celebrate 30 years of the Lexus brand).

The brand’s goal is to “change the way people think about electric cars”.

This model encompasses the brand’s goal to “change the way people think about electric cars” by bringing an un-car-like and unconventional design, according to Lexus Electrified chief executive, Takashi Watanabe.

“This freedom in design makes possible proportions that are entirely new,”  said Mr Watanabe, before stating that the “iconic spindle design” has been “applied to the entire body” of the concept.

Being a battery-powered car without the need for an engine, Lexus’ engineers have done away with the conventional bonnet-fitted motor as seen in a number of production EVs. Instead, all four wheels utilise hub-mounted electric motors which be run all together in all-wheel drive mode, or you can choose for the car to be front-wheel drive, or rear-drive, depending on the situation, using the Drive Power Control system.

Then there’s the Posture Control Technology, which Lexus says “allows the vehicle to have the right posture on any road or in any driving conditions” and allows the motors to run at different power outputs, depending on what is required. Mr Watanabe said there were three keywords for each of the settings – “Comfort” (FWD), Control (RWD) and Confidence (AWD).

The WLTP range is calculated at 500 kilometres for the large 110kWh, though recharging time is unknown at this stage. But Lexus has confirmed recharging is pegged at a maximum rate of 150kW.

The interior design is something new for Lexus.

The traditional bulky steering components are gone, too, with the brand employing a steer-by-wire system for the concept – that means there’s no physical connection between the steering wheel and the front wheels when turning, a point the brand says “allows more flexible tuning control depending on the conditions”. The brand also claims it offers “more precise driving feel, aligned with the driver’s intentions” – though we’re not sure how.

Indeed, the interior design is something new for Lexus, which is labelled “Tazuna” after the reins you’d find on a horse. For the Mazda fans out there the famous tagline “Jinba Ittai” (horse and rider as one) may spring to mind, and Lexus even went as far as to state its own design is like that of “a rider and horse establishing a mutual understanding”.

The cockpit includes gesture control receivers mounted closely to the steering wheel meaning elements of the car can be controlled “without eye movement and cumbersome switch operation”, which could be a further flow-on effect of the continued criticism of the brand’s button-heavy cabins and complex media interfaces.

Of course the gullwing doors, full glass roof with projector screens and show-car-style cabin are unlikely to make it to the production EV that the LF-30 points the way to, but it is likely that the dedicated battery electric car due in 2020 could introduce some of the other technical elements.