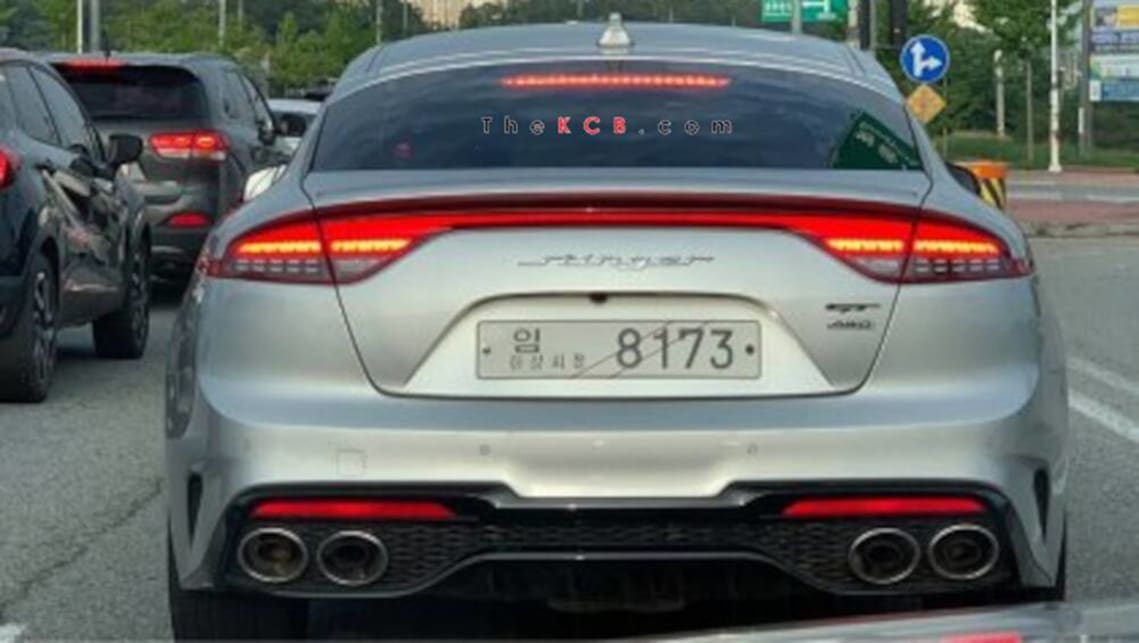 The facelifted version of the Kia Stinger is now tantalisingly close to being revealed, but now we have a very good idea of what visual changes it will bring to the rear-wheel-drive sedan.

Spy shots published by Korean Car Blog show an undisguised Stinger facelift development mule from behind, where most of the visual changes are expected to take place.

The new full-width LED tail-light commands attention, replacing the previous set-up, which linked traditionally split lights with a non-functional horizontal bar. Needless to say, the clusters themselves have been completely redesigned to suit and feature scrolling indicators.

Below, the diffuser insert is all-new, with it incorporating wider reflectors, more mesh grille and much larger quad exhaust tailpipes, which hint at the Stinger facelift’s new variable sports system.

As reported, the extra bark is matched by more bite, with flagship variants fitted with the 3.3-litre twin-turbo V6 petrol engine getting a 2kW power boost, to 274kW, with tweaks made to its canister size and absorption capacity, variable valve timing and ECU.

While the entry-level versions sold in Australia will stick with a 2.0-litre single-turbo four-cylinder petrol engine (likely still producing 182kW), their counterparts in other markets will upgrade to a new 2.5-litre unit with 224kW.

Up front, the Stinger facelift features redesigned LED headlights clusters with four main lamps instead of two, while the integrated daytime running lights are still divided but thicker and more gently curved than before. There are also fresh sets of alloy wheels.

Inside, changes are minimal, although the Stinger facelift’s larger touchscreen (10.25 inches instead of 8.0) can be glimpsed, while a digital instrument is expected to be standard in select variants.

The Stinger facelift will be launched in South Korea next month, so stay tuned for updates ahead of its Australian release, which was originally scheduled to take place in the third quarter of this year.