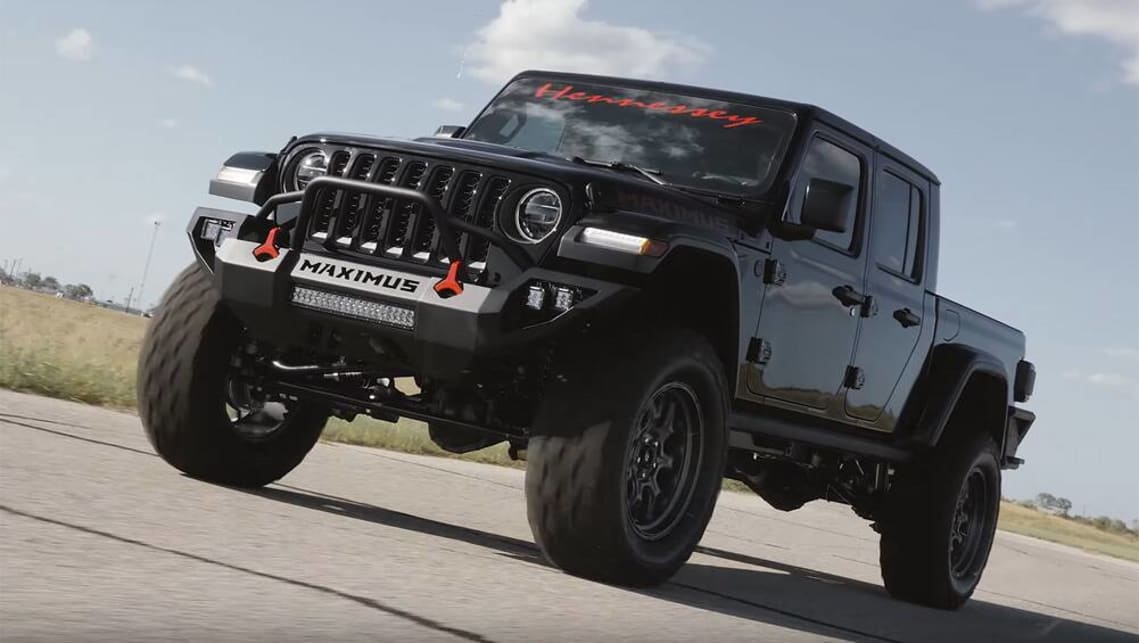 American tuning-specialist Hennessey has created the Maximus 1000, which is described as “the ultimate Jeep Gladiator” thanks to a supercharged 6.2-litre Hellcat petrol V8 heart transplant.

Making its public debut next week at the 2019 SEMA show in Las Vegas, the name Maximus 1000 references its 1000 horsepower power output, which translates to 756kW. Maximum torque reaches a gargantuan 1265Nm.

Not content with just an engine upgrade though, the Maximus 1000 also adopts the eight-speed automatic from its Hellcat-powered cousins (including the Dodge Challenger and Charger, and Jeep Grand Cherokee Trackhawk) and sends drive to all four wheels.

Australia’s popular dual-cab ute segment is overwhelmingly skewed towards diesel powertrains, with the two most potent being the 190kW/580Nm VW Amarok and 190kW/550Nm Mercedes-Benz X-Class flagships that both use 3.0-litre V6 engines.

However, a bit of bad news for Maximus 1000 fans that will not leave them entertained. Only 24 examples will be produced exclusively in left-hand-drive form.

American tuning-specialist Hennessey has created the Maximus 1000, which is described as “the ultimate Jeep Gladiator”.

Hennessey founder John Hennessey said the Maximus 1000 is unique due to its mix of off-road ability and straight-line speed.

“Our clients want exclusive, extreme vehicles that deliver a fun and an exciting driving experience both on and off-road,” he said.

“Our Maximus Jeep with 1000HP is pure ridiculousness on four-wheels. What other vehicle can climb to the top of Aspen Mountain with a KTM dirt bike in the back in the morning and then run 0-60mph in 3.9 seconds at the dragstrip later the same day?”

Hennessy has precedent with hotting up dual-cab utes, as it also produces the Ford Ranger-based Velociraptor, as well as the full-sized Goliath 6×6 that is underpinned by a Chevrolet Silverado.

Most famously though, Hennessey built the Venom GT that set the record for the world’s fastest road-legal car in 2013.