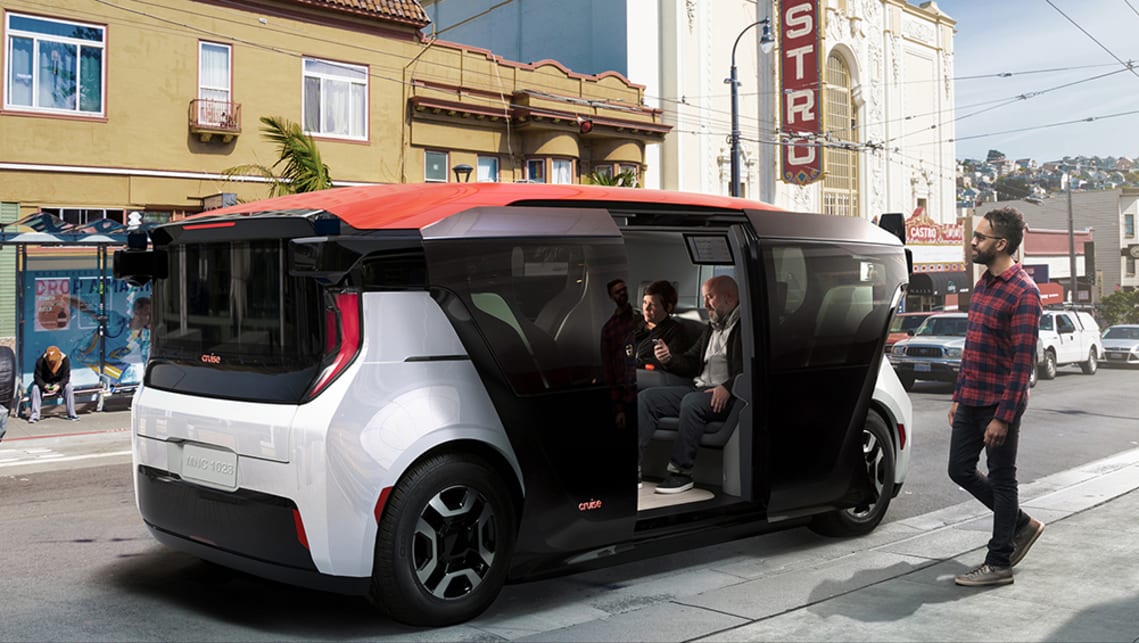 Is this the future of Holden?

What you’re looking at is General Motors’ future. It’s called the Cruise Origin, a new autonomous and electric vehicle that will enter production in the USA by the end of next year – and it could point the way for a radical new future for Holden.

Last week saw the United Kingdom pledge to go fully-electric in 15 years, while at the same time Tesla’s value has surpassed the ‘Big Three’ US automakers as investors believe EVs are the future. Being surpassed by a relative newcomer is something the establishment won’t stand for and has been a catalyst for GM’s new electric future.

“We are investing heavily in the technology and innovation that will help us realize our vision,” she said. “I truly believe that 2020 is the year when all of our work comes together and we move forward with integrated solutions that will be the groundwork for reinventing how we deliver mobility to our customers.”

While there are still some large question marks hanging over Holden’s future, if the brand is to continue, it will ultimately end up falling into line with GM’s wider global plans – and evidently that means a significant amount of EVs and autonomous vehicles like the Cruise Origin.

In simple terms Cruise is a new division of General Motors. The Origin will be its first offering, a mildly-autonomous and electric ride-sharing vehicle that GM wants to begin rolling out across the United States by the end of 2021. While it may look like a pie-in-the-sky concept car GM is very serious about this project.

Like Tesla, Cruise isn’t a Detroit idea, and instead was started by engineer and entrepreneur Kyle Vogt. He made his fortune as co-creator of social media service Twitch before starting Cruise in 2013. He sold the company to GM for US$1 billion in 2016 but stayed with the company as Chief Technology Officer and President.

Former GM president Dan Ammann was installed as CEO after leading the buyout and has already attracted US$7.2 billion in capital.

GM has already confirmed that the Origin will be built alongside the GMC Hummer at a special electric vehicle plant the company is currently working on. As we recently reported, GM and the local government will spend $US2.2 billion to convert its current Detroit-Hamtramck factory into an EV production line.

The reason for the large investment into this new area is because of the potential profits GM sees. According to a CNBC report, Mr Ammann declared the autonomous vehicle market a potential US$8 trillion industry – spread across ride-sharing, freight and other smaller areas.

While GM has survived on its internal combustion engines until now, its investment into Cruise is a key indicator to its future.

How serious is GM about EVs?

GM has tried several times to make a mark in the EV market. In fact, its original offering, the General Motors EV1 of the mid 1990s (specifically its decision to stop selling it despite customers being supportive) was a catalyst for Tesla’s original creators to begin building the Roadster.

More recently the Chevrolet Volt was a plug-in hybrid small sedan that had a short run as a member of the Holden showroom, before being dropped due to underwhelming sales. Currently, GM offers the Chevrolet Bolt hatch in the US but it hasn’t made a significant impact against Tesla’s expanding range.

So, GM made plans for a radical change with its EVs, ditching small cars in favour of giving Americans what they want – pick-up trucks and SUVs. The Detroit-Hamtramck facility won’t just make the Cruise Origin and GMC Hummer, those are just the first confirmed products. GM reportedly has several models planned to add a battery-powered option, including some of its biggest sellers.

It’s likely the same underpinnings used for the Origin and Hummer will fit underneath future Chevrolet pick-ups and SUVs (possibly the popular Silverado and Tahoe nameplates) and Cadillacs (which can carry a greater margin, like Tesla does).

What does this mean for Holden?

In the short-term, probably nothing. The failure of the Holden Volt and the still small market for EVs means the Lion brand is right to stick to its current range of GM products.

However, looking further down the line, if GM can start producing electric pick-ups (or dual-cab utes as we prefer to call them in Australia) then that might change its tune. Holden was quick to add Hummer to its local line-up when it was a standalone brand (albeit briefly), and the reborn electric version might be the kind of statement car the brand needs in its showroom.

The Cruise Origin may seem like a bold vision, but Holden’s partnership with the ride-sharing business Maven suggests the company isn’t afraid to think outside the box. There are an increasing number of small fleets experimenting with autonomous shuttles in Australia, so it represents an opportunity for Holden to try and reinvent itself with the help of Cruise.