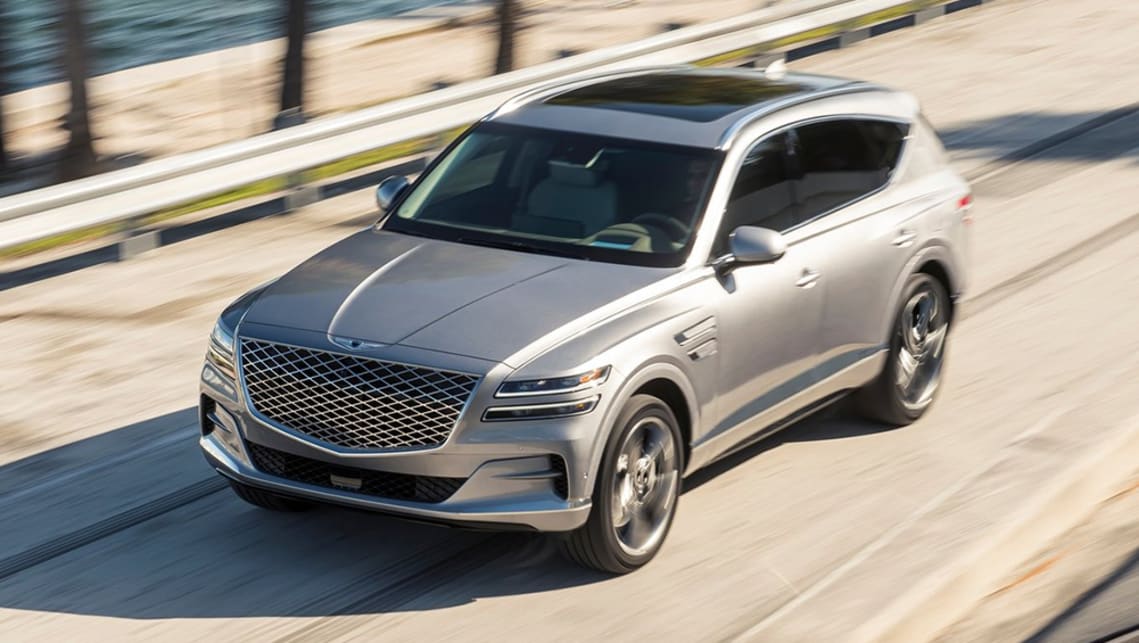 Is it time to take Genesis seriously? Why the arrival of its all-new GV80 SUV could be the turning point for Hyundai’s luxury brand

As Nissan learnt the hard way with the ill-fated Infiniti brand, breaking into the luxury car market dominated by Germany’s Audi, BMW and Mercedes-Benz is not the work of a moment.

It took Lexus nearly 30 years before it was seen as a true rival, and even the more established names like Volvo and Jaguar/Land Rover are still seen as alternative brands to the big three.

So, Hyundai’s attempts to establish Genesis must be seen in the context of a bigger picture, but it’s still hard not to see the arrival of the all-new GV80 as a pivotal moment.

As Genesis’ first SUV, arriving after the brand’s official start in 2019 with the G70 and G80 sedans, there is a lot riding on its shoulders. Unsurprisingly, the sedans have been modest sellers, given the market demand for SUVs, but it has allowed the brand to establish its first ‘Genesis Studio’ (in Sydney’s CBD) and make plans for more as it laid the groundwork.

Indeed, the establishment of the first Genesis Test Drive Centre in Sydney’s Parramatta automotive retail area suggests an understanding that its city-based ‘Studio’ concept may not be accepted by all would-be buyers, and a more traditional approach is needed if it hopes to capitalise on its new SUVs.

The company acknowledges that the arrival of the GV80 marks a turning point for the brand.

“The G70 sports sedan and soon to be replaced G80, whilst both sold in small volumes, helped to establish the Genesis brand in Australia – but we always knew the real growth will come with the introduction of our first SUV,” a Genesis Australia spokesman told Carsguide. “Genesis SUVs will play a significant role in the brand’s future.

“With the imminent arrival of the GV80 and planned expansion to the Genesis showroom network, we expect to see a significant increase in sales.”

Earlier this month, Genesis announced pricing for the GV80 which made it clear it intends to position itself as a better value alternative compared to the German giants.

How the GV80 compares to its rivals

But undercutting on price is only part of Genesis’ plan to try and lure customers. It hopes its ‘Genesis-To-You’ program that allows for concierge-style service, with pick-ups and drop-offs for test drives and servicing, will be a point-of-difference.

“The Genesis suite of ownership benefits are a new offering in the marketplace, and add significant appeal and value to choosing a Genesis over one of the established luxury brands,” the spokesman said. “Genesis will be driven by great product and customer experience – premium product from a premium brand with unmatched premium service.”

How many GV80s the brand will sell locally remains to be seen, with the spokesman opting not to put a number on it and instead playing the ‘quality over quantity’ card.

“We obviously have some internal numbers we have based our business plan on, but we will not be discussing these outside the company,” he said.

“It’s important to note we are placing a heavy emphasis on customer satisfaction, so sales numbers are secondary to the customer experience.”

GV80 is only the beginning too, with a mid-size SUV expected to carry the GV70 name, due to arrive sometime in 2021 along with the brand’s first electric vehicles.

Under former global boss Manfred Fitzgerald, Genesis was vocal in its transition to alternative powertrains, with both EVs and hydrogen fuel-cell electric vehicles (FCEV) likely in the near future. That commitment continues under the current leadership.

While the company unveiled the compact, sporty and electric Mint concept at the 2019 New York Motor Show and promised a production version was coming, the brand’s first EV is likely to be a different proposition.

Instead of a sporty hatchback, it’s likely to take the form of a compact crossover, similar in size to the Hyundai 45 concept also revealed last year; which itself is expected to hit Hyundai showrooms in 2021 as the Ioniq 5. Both models will utilize the new e-GMP EV modular architecture that will underpin a range of Hyundai, Kia and Genesis products in the coming years.

That’s not all though, because spy photographers in Europe have recently spotted what appears to be an electric version of the new G80 large sedan. So, Genesis could have two, very different, EVs on sale by the end for next year.

“Genesis will introduce its first production pure electric vehicle before the end of 2021, we’re actively pushing to bring all future Genesis models to Australia,” the spokesman confirmed.

Genesis Australia is pushing ahead with opening a Studio in Melbourne’s Emporium CBD shopping centre as well as one in Brisbane by the end of 2021. It’s establishing more test drive centres in Sydney and Melbourne to try and cater for what it hopes is greater demand.