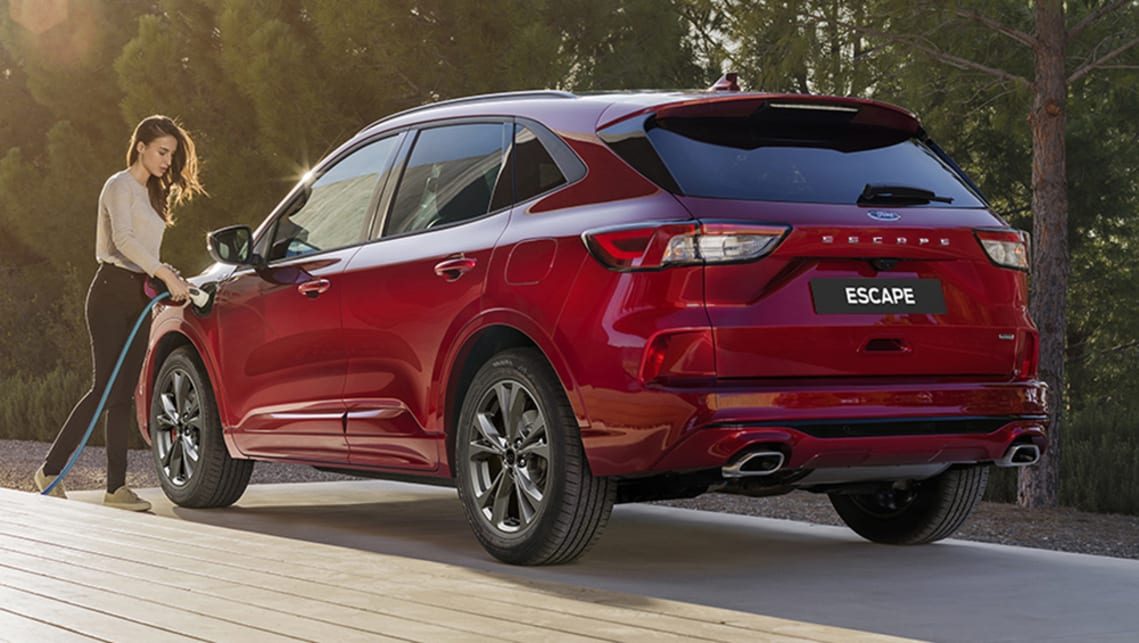 Is a new SUV worth it? Why you should wait for the Ford Escape, Nissan X-Trail, Volkswagen Tiguan and Hyundai Tucson

Aussies can’t get enough of mid-size SUVs, with the segment the second-largest by volume in the country and accounting for a sizeable 16 per cent of the overall market.

With excellent choices like the Toyota RAV4 and Mazda CX-5 dominating the sales charts, it could be pretty easy to pick one of those options if you are in the market for a quality high-riding family hauler.

But let’s say you want to be a bit different, and buy something that will stand out at the supermarket car park amongst the sea of Toyotas and Mazdas.

These upcoming models might fit the bill, and also offer exciting new features that elevate to make the school run a little more thrilling.

The headline feature for the new Ford Escape is the introduction of a plug-in hybrid electric version that will sit atop the range at $52,940 before on-road costs.

With a 14.4kWh battery in tow, the Escape PHEV will boast a circa-50km emissions-free driving range, but is also backed up by a 2.5-litre four-cylinder engine.

Don’t discount the cheaper Escapes either, as a potent 183kW/387Nm 2.0-litre EcoBoost turbo-petrol engine will offer plenty of grunt.

Standard equipment will include an 8.0-inch multimedia touchscreen with digital radio and smartphone mirroring, but the no-cost inclusion of advanced driver-assist systems such as autonomous emergency braking, lane-keep assist, traffic sign recognition, front and rear parking sensors, and blind-spot monitoring is what will appeal most to family buyers.

Nissan’s new-generation X-Trail hasn’t technically been revealed yet, but the US-market Rogue is a strong indicator of what is in store for the mid-size SUV.

Boxy styling and a prominent V-motion front grille characterises the exterior, while upmarket appointments and soft-touch materials will feature throughout the cabin.

Crucially though, the next X-Trail will likely adopt Nissan’s e-Power hybrid system, which uses a small petrol engine to charge the electric motor that drives the wheels, putting it in a better position to take on the electrified Toyota RAV4.

For those that want to stick to petrol power, a 2.5-litre four-cylinder engine will carryover in lower-spec grades, which produces 135kW/245Nm in the US Rogue.

Like the previous two entries on this list, there is an electrified version of the facelifted Tiguan available, offering around 50km of range from its plug-in hybrid powertrain, but it won’t be coming to Australia.

Instead, local buyers should cross their fingers that the newly-revealed Volkswagen Tiguan R performance hero makes its way to local showrooms.

With a 235kW 2.0-litre turbo-petrol engine under the bonnet, the high-riding mid-size SUV matches the sporty Arteon R for outputs, and with drive sent to all four wheels via a seven-speed dual-clutch automatic transmission, it should be about as quick as a Golf R.

Changes to the standard Tiguan line-up include revised looks, the inclusion of USB-C ports and a button-less climate control set-up.

Safety will also be improved with the latest version of lane-keep assist and adaptive cruise control.

Hyundai is yet to reveal its new Tucson mid-size SUV, but we know it’s coming soon with production tipped to kick off next month.

Little is known about the new Tucson, but it is rumoured to adopt much sharper styling and an electrified powertrain to take the fight right to the Toyota RAV4.

A performance N version is also said to be on the cards, which will ditch the 2.0-litre turbo-petrol in the N versions of the i30, Veloster and Kona in favour of a gruntier 2.5-litre engine.