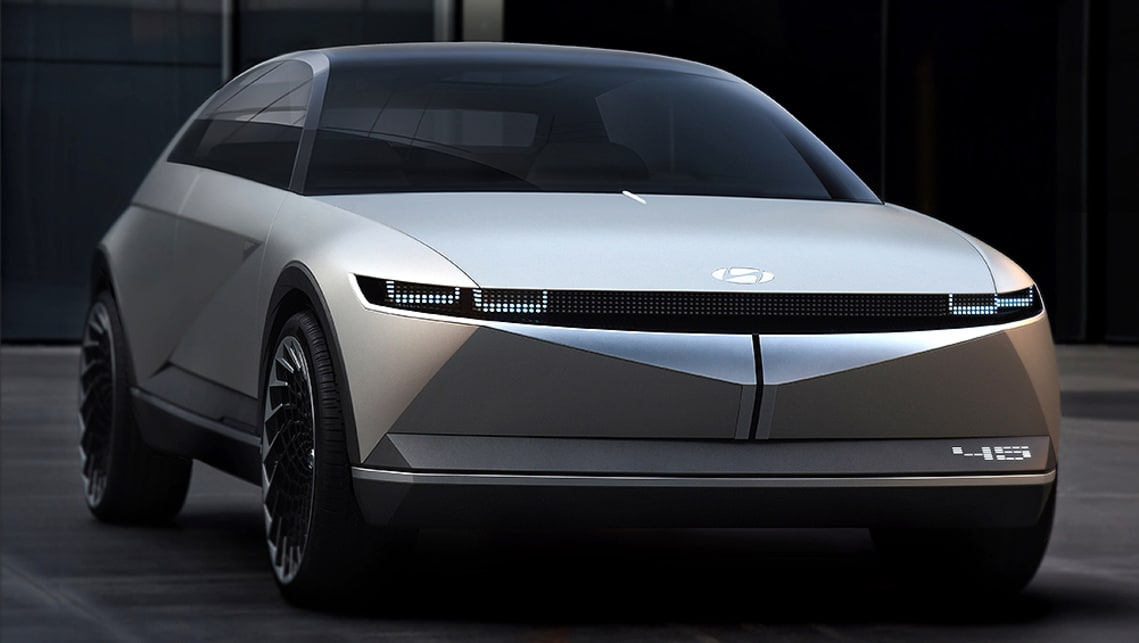 The ‘45’ moniker is a nod to the Pony Coupe Concept that was first revealed 45 years ago, and owes itself in part to the 45-degree angles used throughout the vehicle’s exterior.

Hyundai says the new concept represents an evolution of its Sensuous Sportiness design language, while celebrating the lines of the historic Pony Coupe.

“Through the 45 built upon our design language ‘Sensuous Sportiness’, Hyundai wants to present our vision on how we want to reshape people’s in-car lifestyle in the era of electrification and autonomous driving.”

Hyundai has not specified drivetrain details, although it has confirmed that the 45 uses a ‘skateboard’ floor, which positions a pure-electric powertrain underneath the passenger compartment.

A unique garnish positioned at the bottom of the door hints at long-distance battery compatibility, and active LED lights can show how much battery remains before the driver enters the car.

As a nod to its self-driving capabilities, the 45’s interior can be configured like a household lounge room.

The design also highlights the 45’s self-driving capabilities, with a hidden Camera Monitoring System (CMS) which utilises side cameras instead of traditional wing mirrors.

To overcome issues like dust and dirt obscuring the CMS, a turntable module is used which rotates the lenses past a brush.

In keeping with the self-driving theme, the 45’s interior is laid out like a household living room, with wood, fabric and leather trim for a “warm atmosphere”, and the floor is covered in thick carpet.

The front lounge chair-style seats can rotate to face rear passengers, and the infotainment system can be interacted with via a projection-beam interface – a system which replaces a single central touchscreen with a series of displays integrated into the dashboard.