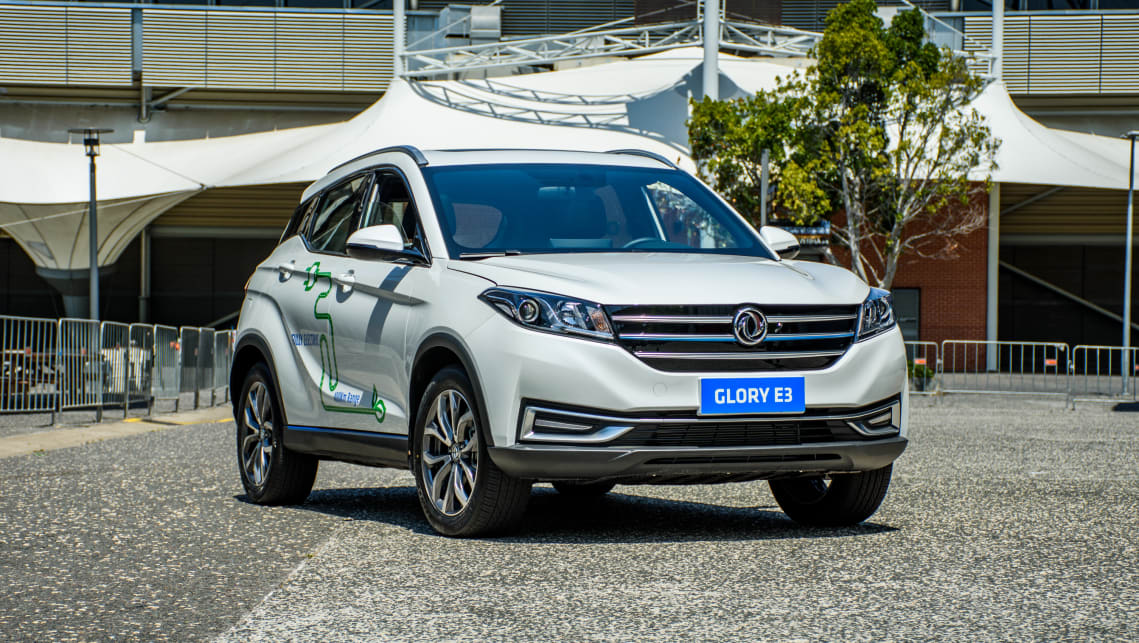 EV Automotive is a new Australian importer, which has tasked itself with the bold undertaking of launching a range of electric-only vehicles into the local market.

The importer will bring in a range of EVs initially sourced from Chinese brand Dongfeng.

Dongfeng is one of the largest manufacturers of EVs in the booming Chinese market and has joint ventures with both Nissan and Peugeot.

EV Automotive plans to offer the Glory E3 mid-sized SUV to the Australian market in 2020 wearing its branding (rather than Dongfeng’s DFSK branding). The SUV offers a 405km range, and a motor capable of producing 120kW/300Nm.

It will be offered in just one spec level with no options and a choice of just three colours. It can be charged via a European-standard Type 2 (CCS) port which has a 20 to 80 per cent “fast charge” time of half an hour, or a “slow charge” time of eight hours.

While it’s early days for EV Automotive, the Glory E3 has promising specs and features.

Apple CarPlay and Android Auto connectivity are yet to be confirmed, but EV Automotive are lobbying Dongfeng to make it available for Australia-bound cars.

Safety is said to include six airbags, lane departure warning, and “forward collision warning”, although it will need full AEB with pedestrian and cyclist detection at a minimum to stand a chance at a five-star ANCAP safety rating.

Although compliance with Australian Design Rules (ADRs) and an upcoming ANCAP rating are still pending for the time being, EV Automotive doesn’t expect any major hurdles for a “late Q1 or Q2” 2020 launch date.

The single spec level will make up some of its “mid sixty-grand” target price with standard items like a digital dash and leather trimmed seats.

While this might not seem cheap for a Chinese mid-size SUV, the Glory E3 will enter a segment in Australia where there will be almost no price competitors.

The smaller Hyundai Kona Elite Electric can be had from $59,990 before on-road costs, and the only other full-electric mid-size SUVs include the Jaguar I-Pace (from $119,000) as well as the incoming Mercedes Benz EQC and Audi e-Tron which will both also exceed $100,000.

The only more affordable alternative will come in the form of PHEVs like the Mitsubishi Outlander PHEV (from $47,490) or hybrids like the Toyota RAV4 (from $35,140).

Expect the Dongfeng to lose all of its Chinese branding before going on sale.

Despite its significant alliances with global brands like Nissan and Peugeot, Dongfeng has no interest in the Australian market, and the Glory E3’s factory right-hand-drive conversion was made possible through significant investments from EV Automotive and other importers who hope to use the Glory EV as a way into European RHD markets like the United Kingdom. It also allows Dongfeng to sell the Glory E3 to the Hong Kong market.

The brand hopes to do away with the dealer network model, aiming to offer a more “Tesla-style” direct-to-consumer sales model, details of which (as well as the method by which the vehicles will be serviced and supported) are light-on for the time being.

The brand says the Glory E3 will be available to purchase online, and has also suggested retail stores for customers to see the cars before they buy.

Expect to have these details as well as full pricing and spec confirmed closer to the Glory E3’s early-to-mid 2020 release window.