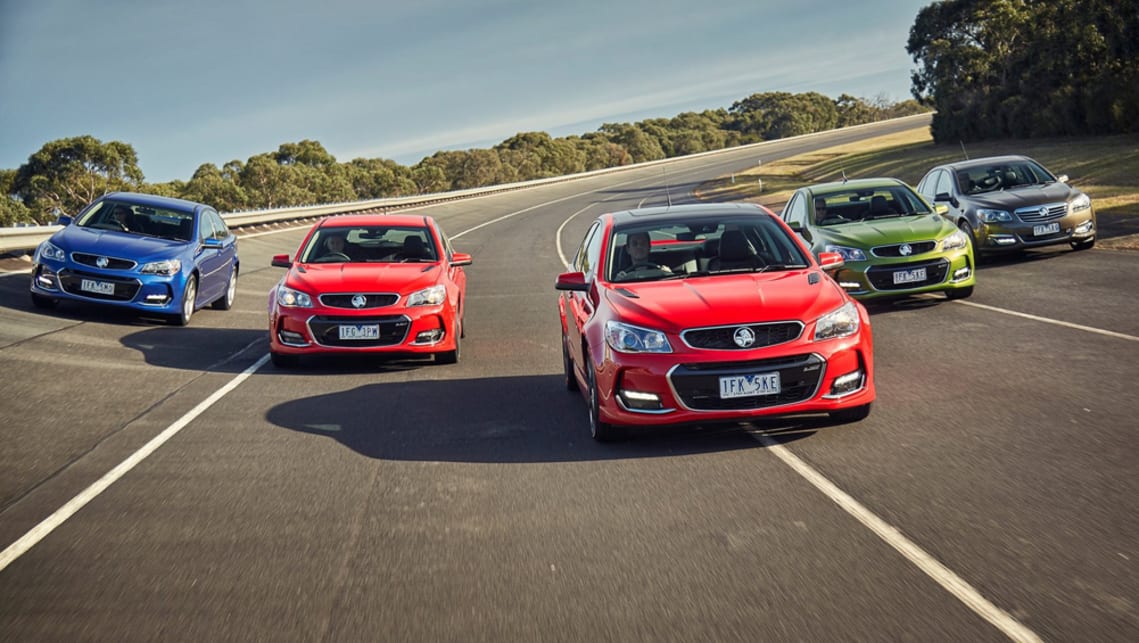 There’s a beautiful, tragic symmetry to the life and death of the Holden Commodore.

It began as a smaller, more fuel-efficient replacement for the Kingswood with assistance from General Motors’ German brand, Opel. The name Commodore was taken from Opel, but the Rekord E that formed the original basis for the car wasn’t strong enough for Australia.

That meant a major engineering job by Holden to create the VB Commodore that launched in October 1978, powered by a choice of six-cylinder or V8 engines, and an Australian icon was born.

Fast forward to 2019 and Holden has made the hard call to end the life of the Commodore, realising Australin buyers weren’t warming to the ZB model. That’s because unlike every other model to carry the name, this one was an Opel Insignia with a new badge. A big chunk of it’s development and calibration was handled by Aussie engineers though.

Unlike the late 1970s, Australian buyers didn’t want a comfortable sedan anymore, they’ve moved onto something different, be it a ute, SUV or modern small car (which would run a VB Commodore close for interior space).

So, the Commodore was born of an Opel and died an Opel. But in between, for 42 years, it was the quintessential Australian car (sorry Ford Falcon fans). Designed here, built here and loved here.

For 15 consecutive years (1996 to 2010) it was the best-selling car in the country, and more than three-million were sold in total.

It won awards, it won Bathurst and it won our hearts. But then we fell out of love and in a few short years it went from favourite to forgotten.

Holden’s decision to introduce the VB Commodore in 1978 wasn’t universally popular at the time because (in case you’d forgotten or are too young) it was launched as a mid-size sedan. It was not the full-size family car the HZ Kingswood was, and there were concerns that buyers wouldn’t like the smaller, European-based design.

The doubts proved unfounded as the VB won the 1978 Wheels Car of the Year award and notched steady sales for the brand.

To underline its durability and suitability for Australian life, Holden entered three new Commodores in the 1979 Repco Round Australia Trial, a two-week torture test covering 19,000km. The trio of Commodores swept the podium, led by the legendary Peter Brock, and the legend of the Commodore had begun.

The VC was introduced in 1980 and saw minor tweaks to the looks, but some major changes under the bonnet. The straight-six and V8 remained, but in a reaction to rising oil prices Holden added a 1.9-litre four-cylinder engine known as the Starfire. It failed to fire and became a forgettable member of the Commodore family tree.

In 1980 Brock waved his magic wand over the VC to create the first ‘Brock Commodore’ to help fund his Holden Dealer Team racing project. It was the birth of the Australian-made sports sedan industry that would boom more than a decade later.

Holden updated the car again in ‘81, introducing the VH with a new look and some changes to the trim levels, but the biggest change to date came in ‘84 with the VK. It had a makeover and introduced new trim lines, but the kicker was the 1985 Commodore SS Group A.

It was a homologation special to help Holden take on the best the world had to offer on the racetrack – where Brock had already notched Commodore wins in 1980, ‘82, ‘83 and ‘84. That meant it got a raft of changes with motorsport in mind, including a more potent 5.0-litre V8 engine. Only 500 were built (because that’s all the Group A rules required) and they have been highly desired by collectors ever since.

The refinement of the first-generation Commodore peaked with the VL that arrived in 1986. Looking smoother and more modern, it also featured a 3.0-litre inline-six-cylinder engine sourced from Nissan to replace Holden’s ageing version.

The introduction of a turbocharged Nissan engine helped it hit a top speed of 200km/h and created a cult favourite among Commodore fans.

The VL was also the basis for Brock’s final custom Commodore – the ill-fated Director. Convinced his ‘Energy Polariser’ helped cars perform better, Brock launched the Polariser-equipped Director against Holden’s will and the company cut ties.

In 1988, Holden finally introduced a second-generation Commodore. They once again turned to Opel, this time taking elements from the larger Opel Senator B and Omega A to create the VN Commodore.

This meant the Commodore was now a genuine large sedan for the first time, finally living up to the Kingswood it replaced a decade earlier and closing the gap to the Ford Falcon. The VN also introduced a new V6 engine, with Holden cutting ties with Nissan and instead building the new 3.8-litre unit based on a Buick design.

At the same time the government encouraged the local car makers to work together, leading to the badge engineering exercise that saw the Commodore labelled a Toyota Lexcen (while, in return, the Toyota Camry became the Holden Apollo).

The VN range also spawned the first Commodore-based utility, with the VG Ute launched in 1990. The stretched wheelbase was also applied to the wagon and allowed for the creation of the Statesman and Caprice luxury offerings, which would go on to be a staple of the Commodore family.

The VR arrived in 1993 sporting a fresh new look which included the ‘twin-nostril’ grille that would become a trademark for the better part of a decade.

The VS featured evolutionary changes but it was enough to finally propel the Commodore to top spot on the sales chart – a position it would keep until 2010 – driven by a combination of private buyer popularity and fleet demand.

The third-generation Commodore arrived in 1997, the VT. It once-again used an Opel as the starting point but had more Australian development than ever before.

Its smooth, rounded styling came around a year before Ford launched its angular Falcon AU and the neck-and-neck battle between the two-sides came to a screaming halt. The Commodore had the upper-hand and took the Holden brand from strength-to-strength.

Buoyed by the popularity of the VT, Holden began to experiment and in 1998 it wowed the car industry by unveiling the Holden Coupe Concept at the Sydney Motor Show. The stylish two-door version of the VT would enter production and revive the Monaro nameplate in 2001.

The other major new development for the VT was the introduction of left-hand drive, thanks to investment from General Motors. It meant the Commodore could be exported to more countries other than New Zealand, with markets in the Middle East and South Africa the first to receive the newly-renamed Chevrolet Lumina. Plus, the Monaro went to the USA wearing the Pontiac GTO nameplate.

VX was a mild update before the VY lobbed in 2002 with a fresh, more angular look. It also introduced three more Holden experiments – cab chassis and dual-cab utes, and all-wheel-drive Commodores.

The Holden Crewman was a stretched version of the one-tonne ute, built from the long body of the Statesman/Caprice duo. It proved short-lived.

An all-wheel-drive system was fitted to the Commodore wagon, creating the V8-powered Holden Adventra. HSV even used the all-paw system on the two-door Monaro to try and create a world-beating sports car. Again, both were short-lived but it highlighted the strength of the Commodore, with Holden having hundreds of millions to invest in these new technologies.

Finally, in 2006, 28-years after the launch of the VB, Holden built an all-Australian Commodore.

No longer relying on Opel, the VE was designed and engineered from the ground up in Fishermans Bend.

Known as the GM Zeta platform it would become arguably the crowning achievement of the local car industry. It was a more grown-up Commodore, with a more aggressive stance and with a world-class ride and handling package.

When Chevrolet wanted to reinvent the iconic Camaro muscle car in 2010, it used the Zeta platform as the basis, and much of the development work was carried out in Australia using Holden engineers and facilities – a major feather in the cap for the company.

And that wasn’t the only exported Commodore, with the Pontiac G8 becoming a cult hit in the US, and the Vauxhall VXR (and HSV version of the VE) also enjoying a short but praised life in the UK.

We even managed to send a heavily-modified version of the Caprice to the US wearing Chevrolet badges for police use.

The Commodore remained Australia’s best-selling car until 2010, a position it had held since 1996, but by then buyers were looking for more fuel-efficient cars or SUVs.

In 2013 Holden introduced a major update, the VF, with revised styling and changes to the mechanical layout with a focus on improving efficiency to keep it appealing.

They also revived the US export program to try and boost production numbers, with the Chevrolet SS being billed as a “four-door Camaro” in its new market.

But it was not enough, despite the fact the Commodore was better than ever before – impressive to drive, good looking and available in a range of styles – Australians had stopped buying large sedans in big numbers.

By the end it was enthusiasts embracing the excellent V8-powered SS-V and the HSV models that helped to prop up sales until the axe fell on local production in October 2017.

Unlike Ford Australia, who opted to drop the Falcon nameplate when it stopped building local cars, Holden vowed to carry on with Commodore. Thus, the fully-imported ZB Commodore was introduced in early 2018 to a mixed response.

On the one hand the Opel designed and built large sedan was efficient and nice to drive, but on the flip side, it was built in Germany and was still an unpopular four-door sedan. In other words, it was right car at the wrong time.

Or perhaps, as history has shown, Holden should have realised at the time that the Commodore may have started as an Opel-based mid-size sedan, but over nearly 40 years, it evolved into a homegrown success story – perfectly tailored to what Australians wanted, until they no longer wanted four-door sedans.

Holden introduced the Commodore to suit a shift in market demand and ultimately that’s what killed it.