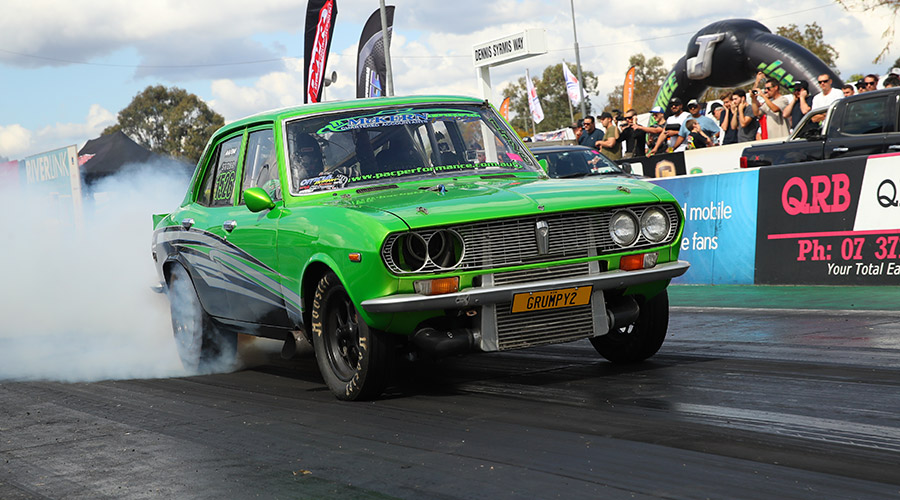 “I am looking forward to yet another GAS v PAC match race – we have been doing this for close on 20 years and it is always as exciting as the last race – neither of us will lift unless we really have to,” laughs Signorelli while insisting “in our opinion the 2Js are proving a lot more reliable and consistent in their winning performances.”

“I reckon hands down the pistons from Team GAS has more wins, George won’t agree with me though!” he laughed. “Piston versus Rotor battles always generate a lot of excitement and ultimately we are both there to put on a good show for the fans and of course, chase the win,” added Signorelli, the head of GAS Racing which is well known around the world for its turbocharged 2JZ Six cylinder engine combos.

“Joe and myself have been rivals for a long time. I am looking forward to putting on a good show for all the rotary fans out there and hopefully we can repeat our winning performance of last year while putting some fear into the eyes of all the 2JZs when the 20b monster pulls up alongside them again!” laughed Rehayem, principal of PAC Performance which is world-famous for its Billet Mazda rotary engines.

“I might be the underdog with most of them being quicker than me, but it is all about consistency, reliability, good driving and a good team and that is where I think we can take the win! We will be putting on a show that no piston car in history could match – you should all bolt your heads on tight,” George concluded.

The battle of the Fuel Tech USA IHRA Pro Mod fast femmes is also sure to turn some heads with the 400 Thunder Australian Top Fuel Champion Kelly Bettes set to take on Australia’s quickest and fastest female Pro Slammer racer, Michelle Davies. Bettes will contest the new Jett Racing turbo-charged Pro Mod Mustang at the Garrett Sydney Jamboree and will take on Davies aboard her supercharged Mustang ‘Slammer.

“I think for the race fans it will be so exciting to see two females in Pro Mod cars running against each other! We don’t have many females in the ‘Slammer type cars and particularly with this match up being Turbo VS Blown it’s the ultimate battle!” Bettes said.

“Michelle is a great lady and someone I never thought I would have the opportunity to race in the same category! It’s very exciting for me and I think she is pretty pumped for it too. Of course I want to win but mainly I’d love to see our race being fast and close!”

“I really admire Kelly having come through the ranks from Junior Dragsters to be a very successful driver and I am really looking forward to racing her,” said Davies, who is one of the quickest female Pro Slammer racers in the world.

“To me it doesn’t matter win or lose, it is all fun and we will put on a show for the crowd. I think it is great to have an all-female match race and the fans should love it, with any match race they put their bets on and the keyboard warriors have their debates on facebook and the fans get pumped, it should be good fun.”

Likewise, the Precision Turbo Factory Xtreme match-up of Jerry Kehl versus Jason Both will be a real grudge match for the ages, with both of the 20b-powered Mazda RX7s of Kehl and Both regularly running in the ‘six-nineties’.

The 2019 Garrett Advancing Motion Sydney Jamboree presented by Link ECU and Tuners Edge will host more than 140 racers on-track while a festival of off-track entertainment buzzes around them all day and into the night on Saturday March 16.

Off the track, a large entertainment precinct on the ‘Eastern Bank’ of the venue will be the place to go for the always popular Shannons Show N Shine, the huge Dragster slide for the kids, the Soundwarz Soundoff and the all-new Jamboree stage complete with big screen backdrop which will host the Kaitlin Bartle dancers as well as Babe & Bikini competitions. At the same time, the Hi Tec Oils Drift Australia Exhibition will entertain racers and fans alike in the pit area.